Opening up Mexico to the world

Article - April 10, 2014
Mexico’s tourism industry – in which Spain is the largest foreign investor – is growing year on year, contributing an estimated 8.4% to Mexico’s GDP and employing 7 million people 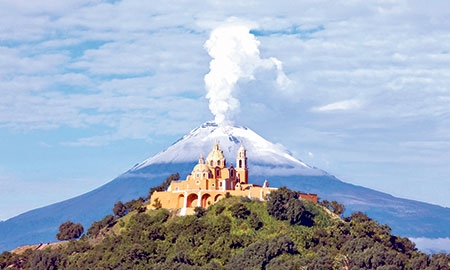 Part of President Peña Nieto’s vision for Mexico is a world-class tourist sector. In February last year he unveiled the National Tourism Policy which aims to turn the country into one of world’s top tourist destinations, with billions of dollars to be invested in the coming years in the building and revamping of new and existing infrastructure.

Already an important part of the economy, tourism directly and indirectly employs around 7 million. Last year tourist receipts reached US$12.7 billion, contributing 8.4% to Mexico’s GDP. It welcomed a record of over 25 million tourist arrivals, a 2.6% increase on 2011. It is hoped this year that that figure could reach over 25 million, generating $13 billion dollars in foreign exchange. President Peña Nieto announced last year that there would US$8.6 billion of private investment in tourism in the next three years, reflecting huge investor confidence in the sector.

Secretary of Tourism Claudia Ruiz Massieu has warmly welcomed the president’s focus on tourism: “From the start of his tenure, the president recognized that tourism was a strategic priority. I’m very happy with his support. We have been rapidly implementing the guidelines of the National Tourism Policy.”

“The president has made clear that the tourism sector is a strategic priority,” reiterates Rodolfo López Negrete, Director General of Tourism Promotion Council of Mexico (CPTM), adding that: “in the tourism sector there are two fundamental aspects, the increase of tourists and the increase of investments. In both areas we are achieving great results. We have experienced growth for many months; it is not sporadic growth but a notable upward trend.

“For us the most important thing is to make Mexico more competitive as an international tourist destination and increase our intake of foreign exchange. We have focused on projecting the image of the open, modern and vibrant Mexico of the 21st century, a place where investors can be confident. Really it has a great diversity of options to satisfy large majority of world consumer, tourists and investors.”

Six months on from the unveiling of the National Tourism Policy, President Peña Nieto in August 2013 formally established the Tourism Cabinet, which will oversee the implementation of policies by coordinating the work of the federal and regional governments, governmental agencies and other important players.

“It is the ideal vehicle to bring together the government’s activities to foster growth in tourism. We truly believe that this is the watershed that will allow us to generate results,” says Ms. Ruiz Massieu.

The resorts of Cancún and Playa Riviera have long been a favorite of beach lovers. But with a rich cultural heritage, stunning landscapes, culinary delights and Hispanic and ancient pre-Hispanic architectural wonders, Mexico offers much more than sun, sand and sea.

In order to compete as a world-class destination, Mexico wants to diversify its tourist offerings. “We want to develop cultural tourism, sports tourism, adventure tourism, ecotourism, luxury tourism, and medical tourism.” says the tourism secretary.
“Innovation is the key to being competitive. We have great tourist attractions, but the tourist wants new experiences, so we constantly have to offer new services and this is what we’re developing.”

A new high-speed rail project also falls in line with the vision for tourism and is going to bring new dynamism to the typical Mexican tourist experiences of Riviera Maya and Cancún. “These are well recognized, world-class destinations and receive the bulk of our international tourists,” says Secretary Ruiz Massieu. “But with these strategies, we are offering the peninsula as a complete destination. You can go to Cancún and Riviera Maya, but also make a trip to visit Tulum, Chichén Itzá, Mérida, Valladolid, Campeche, and the entire Mayan Peninsula.”

Ms. Ruiz Massieu goes on to say that the government has announced a project to build a transpeninsular train as part of a vision to strengthen the regions’ development.

“If we offer a complete all-in-one experience of beach, culture and gastronomy, we’ll have a much more powerful and more competitive destination internationally,” she concludes.