Article - March 11, 2013
The Dominican Republic, which is looking to continue to harness the tourism boom so as to drive economic growth, has proven its ability to build quality infrastructure and thus, its future 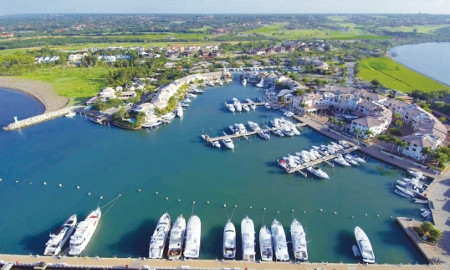 EVER-IMPROVING INFRASTRUCTURE MEANS BOTH GOODS AND PEOPLE CAN GET TO WHERE THEY NEED, AND WANT, TO BE IN LESS TIME
SHARE

The stability of every society hinges on a strong foundation. The Dominican Republic – with a recent past marked by dictatorship, civil war, and general turbulence – might have formerly found itself on shaky ground, but times, people and priorities have changed.

Evidence of this lies in the country’s large investments in infrastructure, which started in the mid-1980s, as tourism started to emerge as an important economic sector and the government actively sought to use it to attract foreign investment.
In recent years, infrastructure has become a driver of economic growth. The country’s many airports, including Las Américas, Puerto Plata, and Punta Cana, are in the process of expanding, remodeling, and adding runways. Its ports, in Maimon Bay and Santo Domingo, for example, are increasing the number of docks and adapting to accommodate cruise ships.
The Caimán and Jatubey bridges and the Guaco and Salcedo roads are all nearing inauguration, and there are plans to build a railway linking Santiago and Santo Domingo.
Gonzalo Castillo, Minister of Public Works and Communications, confirms that efforts are also under way to update the country’s eastern road network to expand the tourism offer through more hotels and complexes and to improve access to sites of interest.
Today, the national scene comprises several key players. One of the indisputable leaders is Grupo Modesto, a vertically-integrated company whose expertise in civil engineering and building has shaped the country’s skyline over the last 15 years. According to President Roberto Modesto, the direct impact of new infrastructure includes “better land transport, shorter travel times, economic savings, social wellbeing, and a more beautiful country. That in turn attracts more tourists and foreign and local investment.”
Grupo Modesto has made notable contributions in terms of construction, and noteworthy projects include construction of the San Cristóbal-Baní highway; IKEA, the first in Latin America; lines 1 and 2 of the Santo Domingo metro; and the bridges over Duarte highway.
Mr. Modesto adds that the construction and widening of Duarte highway, the country’s main artery, represented a turning point for the sector.
“The country has continued to reinforce its knowledge and expertise in construction. Prior to [this highway], there was the idea that a foreign company would have to come and build it,” he says.
The Dominican firms proved that idea wrong.
Local company IMCA has been a driving force in this segment since 1945, through the provision of equipment and machinery required for building these roads, aqueducts and bridges, and has become one of the largest distributors in the Caribbean.
The company also participates in several educational initiatives to provide technological training, the goal being to boost workers’ employability.
Says Pedro Esteva, President, “IMCA believes that this investment has enhanced companies’ competitiveness, since now they have a skilled workforce,” that can better meet demand and can grow their business. IMCA supports national development by investing in resources, technology, and labor.
Two Brazilian companies have also shaped the Dominican Republic’s infrastructure segment. Andrade Gutierrez, one of the three largest companies in the industry in Brazil, has been operating on the island for more than a decade under its AG Caribe division. It participated in the construction of the Northwest Line aqueduct and in channeling water from Mao River.
The company’s current projects focus on energy efficiency and include construction of the Las Placentas hydroelectric plant and the Monte Grande dam, and reconstruction of the Sabana Yegua dam.
Odebrecht has been an active player in the Dominican Republic for five years. The company has several works which are planned, under way or completed, including the Las Terrenas aqueduct, El Río-Jarabacoa, Casabito and Bávaro roads, the North-South Corridor, Coral Highway, and the Jiguey, Pinalito and Palomino hydroelectric plants.
Says the company, “We are here to stay, because [the Dominican Republic] is developing and creating opportunities for new infrastructure projects in a wide range of sectors.”
Looking to the future, Aquiles Bermúdez, of the Dominican Association of Free Zones (ADOZONA), highlights the infrastructure segment as one of the most attractive economic sectors, and “welcomes an increase in investment in transport and energies beyond oil.”
Several major projects are on the horizon, which will connect people, create jobs, drive growth and modernize the country, thus attracting tourism and foreign investment. The Dominican Republic looks like it is locked in a very positive cycle which promises to bring great things.