Article - December 18, 2013
Taking its name from the world's most famous river that flows through its lands, the River Nile State is also the home to the ancient archaeological site of the Kingdom of Kush 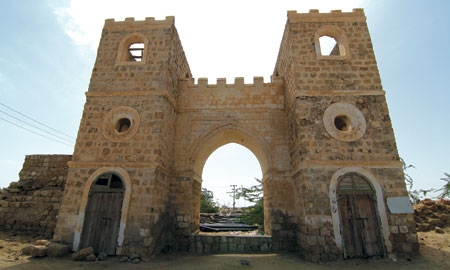 THE GATE TO SUAKIN: LOCATED ON THE RED SEA, SUAKIN WAS ONCE THE HEIGHT OF MEDIEVAL LUXURY, WITH THIS WONDERFULLY RESTORED ANCIENT DOORWAY A REMINDER OF ITS GREAT PAST
SHARE

The River Nile is not only symbolic for being the world’s longest river and an African natural wonder, but for the region of Sudan which shares its name it is the lifeblood pumping through its very soul.
Owing to the great irrigational gifts of the river, the state has arable soil of more than 3 million acres, meaning that rather unsurprisingly the area is Sudan’s treasure chest when it comes to agricultural productivity – becoming nicknamed locally as the “Land of Promise”.
Little known by many outside these parts however – aside from agriculture and the beautiful landscape and wildlife along the river – the state is also the archaeological site of the country’s many ancient temples and pyramids (see front page).
An officially recognised UNESCO World Heritage spot, the archaeological sites of the Island of Meroe were the heartland of the Kingdom of Kush, a major power from the 8th century B.C. to the 4th century A.D.
As the seat of the rulers who occupied Egypt for close to a century, their vast empire extended from the Mediterranean to the heart of Africa, and the spectacular remains here testify to this exchange between the art, architectures, religions and languages of both regions.
The protected property actually consists of three different locations; Meroe – the capital – which includes the ruins of an opulent town filled with royal palaces and a cemetery of pyramid tombs, as well as the equally impressive religious sites of Musawwarat es-Sufra and Naqa, set against dramatic reddish-brown hills that contrast with the vibrant green bushes that adorn them.
In fact, such is the expanse of ancient cultural heritage in this part of Sudan, the River Nile State actually has a second UNESCO honoured spot. The five sites of Gebel Barkal stretching over an area of 60km are testimony to the Napatan (900 to 270 BC) and Meroitic (270 BC to 350 AD) cultures of the second Kingdom of Kush. Tombs, with and without pyramids, plus palaces and living quarters can also be explored here.
With these incredible examples of history remaining largely undiscovered by many an experienced traveller, as Sudan liberalises its tourism sector, it’s only a matter of time before the land with more ancient pyramids than Egypt finally gets greater recognition for its wonderful attractions.