Article - December 3, 2013
The three main political parties agreed to set aside their differences, which has led to a stream of new laws being passed under the Pact for Mexico 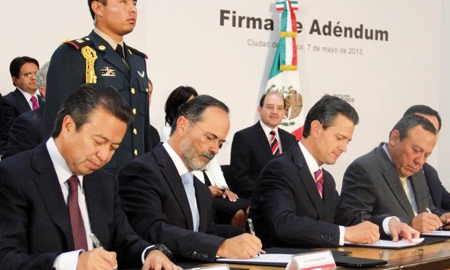 SIGNED ON DECEMBER 2 2012 FOLLOWING YEARS OF PARTISAN GRIDLOCK, THE PACTO POR MÉXICO, OR PACT FOR MEXICO, IS EXPECTED TO RESULT IN 95 CROSS-PARTY AGREEMENTS BY THE SECOND HALF OF 2014
SHARE

After 15 years of political stalemate when very few initiatives or policies got passed into law, this year Mexico has seen a stream of new agreements and bills on everything from the telecoms and energy sectors to education and prohibiting junk food in schools, as Mexico’s largest political parties from the left and right agreed to usher in a new era of constructive cooperation.
The inability to introduce reform and new legislation because of obstructionist politics from 1997 until the end of last year had had a hugely negative impact on the economy and a had been a chief deterrent for investors.
Knowing this could continue no longer, the three main political parties – the incumbent Institutional Revolutionary Party (PRI), National Action Party (PAN) and the Democratic Revolution Party (PRD) – agreed to sign the Pacto por México (a Pact for Mexico) in December 2012, the day after the new President, Enrique Peña Nieto, was sworn into office.
The pact is paving the way towards widespread and meaningful reform. It has led to increased investor confidence in the past 10 months and has ignited optimism about the country’s future. Ratings agency Standard and Poor’s has kept its positive outlook on Mexico’s credit ratings as the President’s energy and tax reforms could significantly strengthen the country’s fiscal position.
“The past year has been one of the most productive legislative years for many, many years,” says the President of the Senate, Dr. Raúl Cervantes Andrade. “I see changes. I see maturity and above all I see the expression of each and every one of the parties. No one is against an issue, no one says: ‘that subject is unnecessary’. That it is what a constitutional democracy is all about – the exchange of ideas, points of view and approaches.”
So far a stream of new bills has been passed with many more to come in the months ahead. In telecoms, ministers voted to establish a new regulator authorized to break up the dominant position of television powerhouse, Grupo Televisa, which controls 70% of the broadcast TV market, and Carlos Slim’s América Móvil, which currently holds an 80% share of Mexico’s fixed line market and 70% of the mobile sector market share.
With Mr. Slim’s stranglehold on the market loosened, these reforms are expected to spark increased competition and better and cheaper telephony services for consumers. In September British tycoon Richard Branson took everyone by surprise when he expressed his intentions to enter Mexico’s telecoms sector and compete with Mr. Slim on his home turf.
An overhaul of the tax system is also imminent. With a tax intake of 19% of GDP, Mexico has the lowest tax intake revenue of the 34 members of the OECD. A new bill passed at the end of October means that the country’s top earners will pay a higher rate of tax.
Furthermore, in a bid to improve the general health of the nation and at the same time bring in some much-needed revenue, the political parties agreed to a levy of 8% on ‘junk food’ and soft-drinks. The government plans to use the increased tax revenues for investment in infrastructure, health and other social services.
Judicial reform that has been passed includes the end of immunity of public officials from prosecution for crimes, which should do much to eradicate a culture of corruption and impunity. New rules aimed to curb state and municipal debts were also introduced in July.
Perhaps the most groundbreaking – and contentious – reforms are those proposed for the oil and gas sector; President Peña Nieto wants to open up Mexico’s oil industry after a 75-year monopoly by state-owned Petróleos Mexicanos (Pemex). Oil production peaked in 2004 at 4 million barrels a day, but dropped to 3 million barrels a day by 2012, as reserves have begun to dwindle in shallow-water fields. Pemex has neither the capital nor the technology to exploit deepwater reserves of what could be up to 27 billion barrels, and shale gas resources that might be as high as 460 trillion cubic feet, according to Pemex data.
The government has faced stiff competition from the left-wing PRD and the public, as the nation’s oil wealth is seen as a thing of national pride; so much so that the day in 1938 that President Lázaro Cárdenas removed international oil companies and nationalized Mexico’s reserves is celebrated each year as a national holiday.
However, the President has asked the public not to dwell on the past, but look to the future. “This is the moment to utilize all of our energy to move and transform Mexico,” Mr. Peña Nieto said in September in a televised speech from the presidential residence, Los Pinos.
Despite the PRD’s reservations on the oil bill, they have vowed not to let the pact be destroyed because they don’t get their way on a single issue. This is a sheer sign of how determined the parties are to set aside their once progress-crippling political differences in order to work to find a common ground for the good of the country.