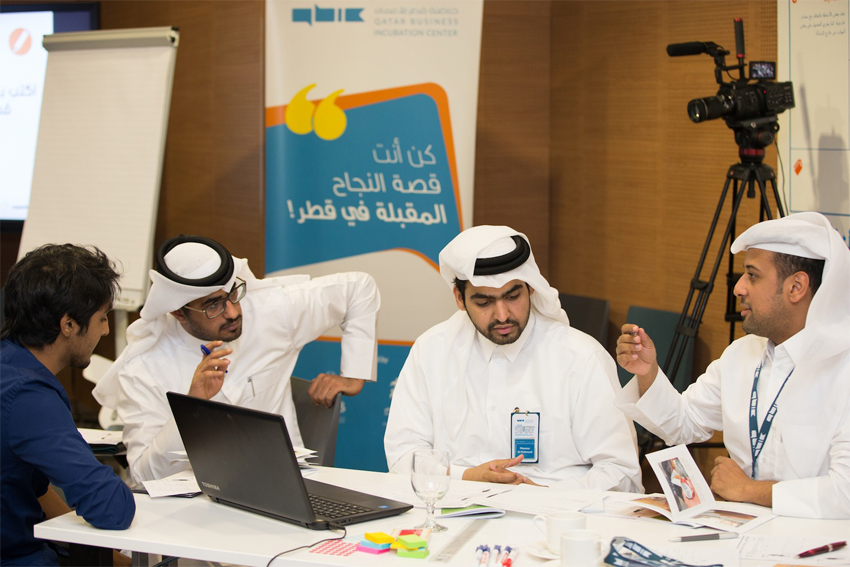 SINCE ITS LAUNCH IN 2014, QBIC HAS INVESTED QAR 1.9 MILLION IN ITS INCUBATEES’ STARTUP BUSINESSES, GENERATING APPROX. QAR 6 MILLION IN REVENUE
SHARE

Since its establishment in 2014, QBIC has invested a total of QAR 1.9 million (approx. $520,000) in its incubatees’ startup businesses, and in turn has generated approximately QAR 6 million in revenue. With the support of its specialized incubators, QBIC has already exceeded 80% in space occupancy and has completed six waves of its flagship LeanStartup program, bringing the total number of incubated startups to 61 companies.

As an institution, QBIC is playing a crucial role in supporting Qatari startups and SMEs by providing them with unparalleled services and guidance needed to succeed in the local market. Incubated startups are already gaining momentum and making a difference in the private sector.

Amongst the many successful entrepreneurs, several have taken their businesses to new levels crossing key milestones, and gaining recognition locally, regionally and internationally.

Qatari homegrown luxury perfume brand S. Ishira, founded by Shaikha Al Misned, is a product that combines the rare Arabian scents of oud, saffron, amber and vanilla. S. Ishira was officially launched on a grand scale in Milan, Italy, at the international artistic perfumer exhibition, Exsense 2016. S. Ishira had a very memorable presence at the exhibition and left a mark with her newly released PHI Collection.

Other startups have also exhibited their products internationally. iSee Checks Printer is a smart, mobile check printer that eliminates common mistakes in formulating and filling out personal checks. The founder, Mohsin Al Shaikh, exhibited his product in Geneva and won the gold medal on ‘Well Captured’ by ‘Science Club’.

Sealine Tents, a startup that provides authentic tents for visits and camping trips around Qatar and was founded by Jabir Ali, received a certificate of appreciation from the Administrative Development and Labor Ministry for its spirit of innovation and efforts to keep the Qatari cultures and traditions vibrant and timeless.

In addition, other local female entrepreneurs have been internationally recognized for their great accomplishments. Amal Al Shammari, founder of Embrace Doha, was recently awarded a tour with Goldman Sachs’ 10,000 Women Entrepreneurs organization in the United States. Embrace Doha is the first service provider of its kind in Qatar and offers a range of cultural services that cater to the needs of newcomers, expatriates, and visitors.

Despite their young recently launched startups, tourism entrepreneurs have also been making headway in the industry. Tartebkum is a startup offering modern desert trips and adventures for women. The company also offers holiday organization services for trips around the world, aimed at Arab women seeking catered trips that focus on culture, health and beauty. Founder, Noura Al Amri, returned from a very successful trip to Japan in which she presented her business idea, which was very well received, and established a partnership with a travel agency. She is now in the process of arranging trips for tourists from Japan to visit Qatar in the near future.

Mohammad Islam, the founder of MIH Systems’ glasses created to aid the visually impaired, presented his product at the British Council’s Business for Social Impact 2016 and received extremely positive feedback.

Also, Musab Almozien, founder of Samaam, has successfully exhibited his product at Step Conference 2016 in Dubai, the largest interactive event in the MENA region.

Finally, the tech-incubated company ibTECHar made it to the finalists of the startup track in the ninth competition of MITEF Arab. They received very positive feedback and expert guidance in order to develop their business further. ibTECHar provides consultation and products in the educational sector, using technology to empower teachers to unleash learners' potential.

Another incubated company in QBIC Tourism, Doha Center for Tourist Media (DCTM), recently concluded a familiarization trip for media in Qatar. The media spent five days in Qatar as part of a larger itinerary throughout the GCC. Hosted by DCTM, the visiting media explored the Al Zubarah fort, Katara, Pearl-Qatar, and off-roading and camping adventures that Qatar has to offer. This is one of the many efforts by DCTM, a QBIC Tourism startup, to provide visitors to Qatar with the right information.

Qatar Development Bank CEO and QBIC Chairman Abdulaziz Bin Nasser Al Khalifa said: “Nothing makes us happier than witnessing the successes of our incubated companies. Their achievements reflect the strength of our program, and their success represents an encouraging trend in the development of the local entrepreneurship scene. By crossing these key milestones, they’re gradually becoming a vital part of Qatar’s wider national development.”

Aysha Al Mudahka QBIC CEO said: “We’re so proud of our entrepreneurs’ accomplishments. We’re very pleased that with all the hard work they have put into their businesses and the action-oriented expert coaching they have received from QBIC, they’re able to prove themselves as successful well-developed startups not just locally, but also regionally and internationally. We hope that these successes are the stepping stone to their journeys towards becoming the next QAR 100 million companies in Qatar.”

One of QBIC’s flagship initiatives is LeanStartup, turning innovative ideas into startup businesses. LeanStartup is a 10-week entrepreneurial program that provides real-world, hands-on learning experience on how to successfully start a company.