A strong U.S. partner in the fight against ISIS, Qatar is “a bedrock of stability in a sea of turmoil”, according to Emir Sheikh Tamim bin Hamad Al-Thani, and an important mediator in the Middle East. A leader in humanitarian aid, the tiny emirate is investing heavily in education initiatives to help curb the spread of extremism 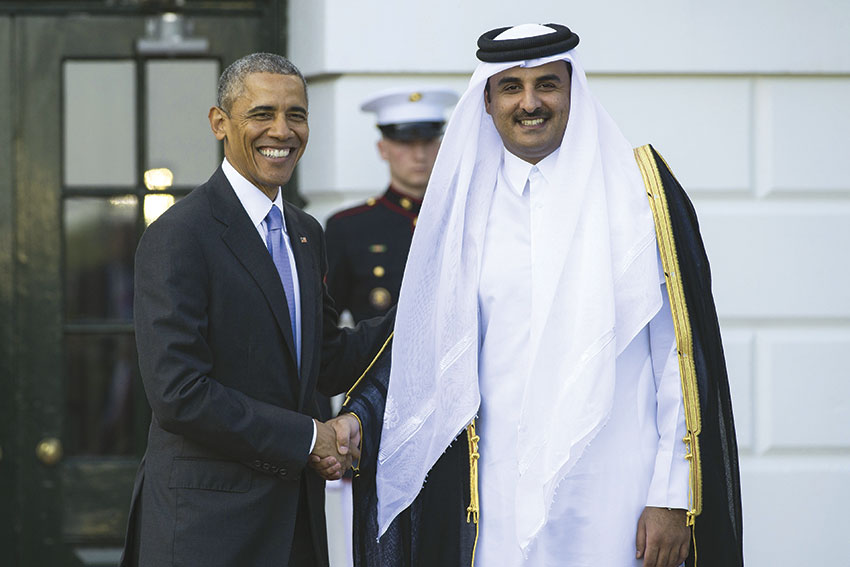 Leading figures in Qatari politics and business say the country is destined to maintain solid relations with its international partners while seeking new revenue-generating ventures at home and abroad.

Many have characterized Qatar’s relationship with foreign partners, particularly with the United States, as a source of pride.

In an opinion piece written for The New York Times, Qatari Emir Sheikh Tamim bin Hamad Al-Thani said that Qatar is forging new ways to solve problems both inside and outside its borders.

“We must work together to pull the Middle East back from the brink of collapse. This will require a bold commitment based on a long-term vision of justice, security and peace for all the people of the region. And we in Qatar are ready to do whatever it takes to help achieve this vision. To that end, our strong bilateral relationship will provide a solid foundation for cooperation between the United States and Qatar, both in the region and beyond. Indeed, our strategic partnership has deepened in recent years, in spite of the regional unrest,” the Emir wrote.

The largest U.S. base in the Middle East, accommodating approximately 10,000 troops, is located at the Al Udeid Air Base in Qatar, close to the Qatari capital of Doha. Qatar has also been a participant in a coalition to fight the so-called Islamic State.

Al-Jazeera reported that President Barack Obama recently lauded Qatar as a “strong partner” in the fight against ISIS.

American officials in Qatar also say the nation is an example of steady leadership in a complex area of the world.

“If you look at the map where Qatar is, it is in the middle of a stormy region. There is conflict in almost every direction, as well as powerful neighbors.  In the midst of this, Qatar is a country looking to the future.  People here are thinking about education, the future, innovation and empowering youth,” says Dana Smith, the U.S. Ambassador to Qatar.

“[Within this context, Qatar has acted as] a mediator of conflict, maintaining relationships with everyone and using those relationships to try to solve conflicts.”

“I would argue that what Qatar is doing is countering violent extremism. Not by overt messaging, but by offering and investing in education. Qatar is trying to build, first and foremost, a better country with more opportunities for its own people, and then a better region and a better world. You cannot do any of that without education,” Ms. Smith says.

Robert Hager, Chairman of the American Chamber of Commerce Qatar, echoed Ms. Smith’s opinion. He calls Qatar “a strong ally of the US.”

“[Qatar] as a country [has been] able to keep relations with countries where we need to have dialogue. This has been part of Qatar’s diplomacy for many years, and it is playing a key role in how the world community is dealing with the issues of terrorism. It is also playing an important role in helping resolve conflicts, which is a role Qatar has traditionally had, and continues to have,” says Mr. Hager.

In Qatar, the government’s long-term growth plan aims to diversify its economy and encourage more human development. Officials say the Qatar National Vision 2030, as the program is called, relies on cooperation between the public and private sectors.

“We believe that Qatar is now at a pivotal moment in its history, as it must move beyond the oil and gas industry to ensure that its economy is diversified and sustainable, guaranteeing a more prosperous tomorrow for its citizens,” says Dr. Saleh bin Mohammed Al-Nabit, Qatar Minister of Development Planning and Statistics.

That sentiment is also shared by business leaders in Qatar.

“The 2030 vision rests on four solid pillars that range from economic, human, social and environmental development. That gives our country’s growth a comprehensive nature, creating a strong framework with good structures in place to induce and encourage all-round growth. But these structures alone won’t deliver the level of development Qatar aspires to. This is where I see the private sector coming in. I believe there must be a united effort between the state and private sector to boost holistic development in the country,” says Adel Ali bin Ali Al Muslimani, Chairman of Ali Bin Ali Group, a Qatar-based retail and distribution company.

Ooredoo, an international telecommunications company headquartered in Doha, is also backing the effort.

“Our main capacity to help achieve the 2030 Vision lies in supporting the growth of a knowledge-based economy. There is no denying that the future of Qatar’s knowledge-based economy will depend on technology, and we believe that the technology we provide to our people, be it state-of-the-art products or high speed connectivity, can ensure access to the best educational tools available,” says Waleed Al Sayed, Group Deputy CEO and CEO of Ooredoo Qatar.

According to Qatar News Agency, Minister Al-Thani said almost half the funds would be earmarked for education initiatives to help curb the spread of extremism, violence and “loss of hope.” He also reportedly said all countries need to respond to international crises not just through aid relief but also common political action, which will help bring stability.

At the same time, other institutions are raising funds to help people around the world. One such organization is the World Innovation Summit for Education (WISE). Founded by the Qatar Foundation for Education, Science and Community Development and spearheaded by former Qatari first lady and mother of the current Emir, Sheikha Moza bint Nasser Al Missned, WISE describes itself as a promoter of “innovation and building the future of education through collaboration.”

Education Above All, another charitable organization led by Sheikha Al Missned, has also pledged to bring primary schooling to 1.1 million Syrian refugees.

“We have already enrolled half a million children in Syria, Jordan and Lebanon into quality primary education. By 2017, we hope to have more than doubled that number to 1.1 million,” she said in a statement.
Qatar Charity has also been supporting victims of the Syrian crisis and other conflicts in the region.

“When there is a crisis, such as the one taking place in Syria, we make sure to be the first NGO to respond,” says CEO Yousef bin Ahmed Al-Kuwari.

“The UN OCHA’s Financial Tracking System shows that Qatar Charity has been ranked number one among NGO’s in terms of level of support for the victims of the Syrian conflict, as well as in Yemen, Somalia and Palestine.”

Such efforts seemingly support a statement made by the Emir in his piece for The New York Times. In it, he wrote that he felt Qatar played a crucial role in promoting harmony in the Middle East.

“Although Qatar has been a bedrock of stability in a sea of turmoil, we are part and parcel of the region, and we care deeply about its wellbeing,” he wrote.

“We have joined the United States-led international coalition against terrorism, and we are united with our partners in the Gulf to combat violent extremism in all its forms. In keeping with our role as mediators between regional adversaries, we have also been active in diplomatic efforts to solve protracted conflicts in conflict-ridden places such as Sudan, Lebanon and Yemen.”