Qatar 2022: “We are committed to unleashing the unifying power of the World Cup”

Amidst the controversy surrounding Qatar 2022 – the latest being that it will be held in winter – Qatar's Supreme Committee for Delivery and Legacy have promised that they are committed to unifying the world under the “unifying power of the World Cup” as the country enters the “delivery phase” of the tournament. 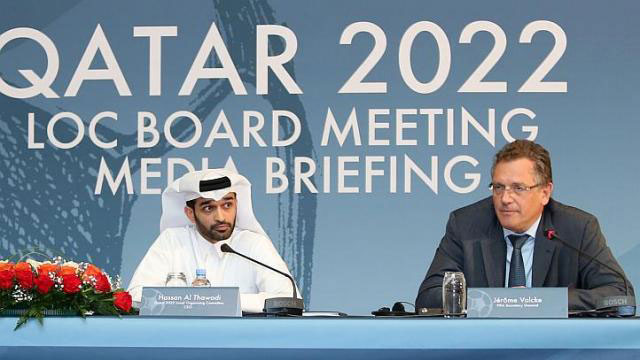 Qatar's Supreme Committee for Delivery and Legacy has made the promise to unify the world and the region through the power of sport at a joint press conference with FIFA, as it was announced the Qatar World Cup 2022 would be played in November of that year, breaking the longstanding tradition of the World Cup being a summer tournament.

The move is to accommodate fans and players after worries that a tournament held in June and July (where temperatures can reach over 40 degrees in Qatar) would be unfeasible.

“From the day we were granted the right to host the World Cup, we went through four years of significant preparation and planning,” said Hassan Al Thawadi, Secretary General of Qatar’s Supreme Committee for Delivery and Legacy.

“Today [the meeting with FIFA] was a great milestone. It is the culmination of four years of work...a moment of personal pride. The meeting was very positive and showcased progress and more importantly launched the delivery phase of us hosting this major event which will be held in the Middle East for the very first time.”

In a joint press conference held with the Fédération Internationale de Football Association (FIFA), the mix of energy and intrigue was apparent, with international press from around the world asking challenging questions to the local organising committee and Jerome Valcke, Secretary General of FIFA.

“It is the first time we are here to discuss the organisation of this World Cup, and I would like to say it is a very special World Cup because we…describe it is as the first compact World Cup,” said Valcke.  “I think it will be great for the teams because they will have one base camp for the duration [of the tournament] and therefore no stress of travelling.

“It is also a very interesting as a legacy project,” continued Valcke, “as all the construction of the stadiums is based on an exchange with the local community, to make sure that there will be a number of infrastructure projects around each stadium to ensure a lasting legacy and to please the community.

“Talking about legacy most of the stadiums will be reduced by 50 percent by the end of the world cup to make sure they are adapted to the structure and use of the country.”

Probably the most debated World Cup of all time, Qatar has faced criticism of working conditions and the low quality accommodation of the enormous workforce involved in the infrastructural development required to make the World Cup a reality.

“Still there are problems and things to be solved [in the country] and we are in discussion with local organisations and the authorities of Qatar,” explained Valcke. “But I have to say that if the standard of all the construction sites in Qatar reaches the developed standard of the specific World Cup sites that I have visited then a big step will be made in this country for working conditions, and that again is the power of the World Cup. Whenever it is in a country it can be used as way to change things.”

It has become apparent throughout Qatar’s bidding process, and since the country was awarded the tournament, that Qatar 2022 will be unlike World Cup seen before or perhaps again, with the announcement not only that it would be held in the winter, but also that they would be narrowing it to 28 days rather than the usual 30, thereby adding weight to the title bestowed to 2022 as the ‘compact World Cup’.

“The fact that we will reduce the competition to 28 days means we will have to play four games a day which means more games played in the first period of the competition. The 23rd December is not a fixed date for the closing of the tournament...at the moment the recommended date is to play at the end of November and December.”

18th December (another muted date for the final) may best serve both travelling fans and locals alike, as those travelling from around the world can get home in for Christmas, while the date would also coincide with Qatar’s National Day celebrations. However, global football fans will have to wait until the announcement on the 19th March to find out when the competition will end.

Meanwhile, with falling oil prices having raised questions about the stability of Qatar’s economy in recent months, Hassan Al Thawadi did his upmost to quash rumours of crisis.  “Our plans are moving ahead and we have to make sure that all of our projects are economically feasible and this is not just a matter of the oil price going down or us lavishly spending on projects, we are looking at it in a fiscally responsible manner, every investment is one that fulfils Qatar’s requirements. Qatar’s national vision 2030 looks at the economic diversification as one of its pillars and the World Cup is one of the catalysts that will bring us towards delivery of that goal.”

While many point to commercial reasons behind FIFA’s decision to award Qatar the World Cup,  Al Thawadi said the country’s successful bid has been down to a thirst for change. “This is the first world cup in the Middle East and there is a lot of passion for the sport here and it is a deep, profound passion. Bringing this world cup here is a significant step, bringing any major sporting event here is a very big step, but bringing the world’s biggest sporting event to this part of the world is a pioneering step.

“There is no other platform that brings people together like football, and in this part of the world today where polarisation and different extremes are being introduced this is a great opportunity for all of us”.

Otherwise up for discussion was the issue of Qatar’s ‘cooling technology’, something that helped the country win over FIFA officials in the bidding process amid concerns about the searing Qatari summer heat.  With the tournament now being held in the cooler temperatures of winter, the technology will not be required for the stadiums,  but Mr Al Thawadi explained that the cooling technology research continued to be a  a pillar of Qatar’s National Vision and therefore would still be developed.

“Transferring the use of the technology to transform facilities into greenhouses addresses also the important issue of food security and that is a priority,” he said.

Finally, with regards to disruption that moving the tournament to November and December would cause to European football calendars, FIFA’s Mr Valcke remained adamant that the hosting of a winter tournament was nothing that needed to be apologised for, and nothing that would require compensation to leagues or clubs.

“There are 7 years to organise football around the world and we are all making concessions to ensure this can be played in the best conditions for the players and for the fans. We are just changing the format and the structure of the season, we are not ruining football.”

Amidst all the controversy, amidst the FIFA narrative, and amidst the negative press coverage in recent years, one major emotional point brought up by The Supreme Committee for Delivery and Legacy Secretary General was that, at the end of the day, the only divisions that the World Cup should create is one between sport and politics.