The Republic of the Congo is developing its logistics network by investing in new deepwater ports that will connect with highways and even airports, enabling the Central African country to not just export its own goods but also act as a gateway for the wider region as a whole 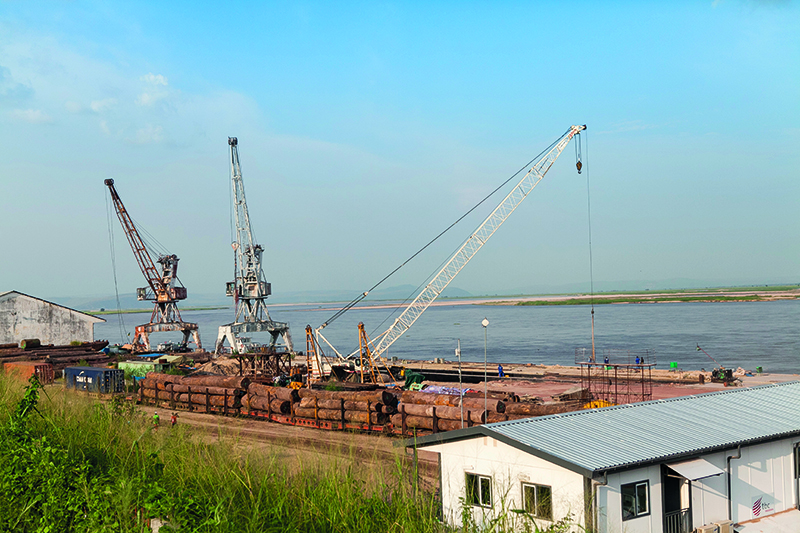 As part of its efforts to increase commerce and trade, the Republic of the Congo is investing in transport infrastructure that ranges from roadways and international airports, to deepwater ports for the world’s largest ships.

Maritime-based trade has become an increasingly important part of the country’s development and is allowing the nation to distribute not only its own goods and services but also act as a gateway for the entire Central African region.

“You only have to look at the map of the Gulf of Guinea to see that the Republic of the Congo represents an opening for Central Africa,” says Rodolphe Adada, Minister of State for Transport, Civil Aviation and the Merchant Marine. “We have the Atlantic coast with 160 miles of frontage and there is also our geographical position, especially the port of Pointe-Noire.”

Mr. Adada adds that a rail link is also set to improve connections between Brazzaville and Kinshasa, enabling “the opening up of access to Central Africa and providing opportunities for these countries.”

To support such ambitions, several ports are currently being built in the country, among them the Autonomous Port of Brazzaville (Port Autonome de Brazzaville). Along with an array of secondary ports, the new set-up looks likely to play an integral part in the country’s greater transport network.

Much of the focus has been directed on the Port of Brazzaville, which is being developed to become a regional logistical hub. It will connect the north of the country with the south port of Pointe-Noire, and link railways, river transport and highways. The port’s capacity is planned to be 1.2 million tons and there are additional plans to construct a second port at the point where the road to Pointe-Noire terminates, furthering the reach of the country’s transport network.

“The development is part of President Denis Sassou Nguesso’s vision for the country to develop logistical platforms so that railways and roadways in the country arrive wherever there is a port,” says Martin Blaise Boyamba, former Director of the Autonomous Port of Brazzaville.

The Port of Brazzaville is a commercial and industrial public entity that has management autonomy and was created in 2000 by presidential decree. An earlier group of railway, waterway, and port entities was split up by the government into the Autonomous Port of Pointe-Noire, the Congo-Ocean Railway, and the Autonomous Port of Brazzaville. These divisions operate joint activities however, including the maintenance of inland waterways that oversee river transportation between the Central African Republic and the Republic of the Congo, as well as shipyards. Public boat transport has to date been provided by a national company, but this is being liquidated to allow for private investment, whether local or foreign, to stimulate modernization in this sector.

The importance of developing the Port of Brazzaville and its secondary ports is clear, with the Republic of the Congo claiming more than 5,000 kilometers of waterways in the interior of the country that need to be enlarged. The government is welcoming investment for this project and has showed its support for maritime infrastructure by already financing 90% of the Port of Brazzaville’s activities. The Port Authority has also been looking abroad for investment and support, and signed a CFA200 billion ($328 million) deal last year with the European Union to expand operations.

Developing this resource is a vital step for the country’s wider prosperity, as the north of the Republic of the Congo is home to many industries and raw materials that are difficult to transport to the capital, Brazzaville. Thanks to government efforts though, particularly regarding the construction of roadways, journeys that would once have taken ten days can now be completed in several hours. This is the case for the journey between Brazzaville and Oyo, where roads have been progressively modernized since the 1970’s.

Further developments are on the cards, such as communications investments that will see the network of fiber-optic cables making their way to the border with Gabon. With the completion of this infrastructure, and with the benefit of international partnerships, the Republic of the Congo is aiming to become an emerging nation by 2025. Focusing on developing reliable infrastructure is a determining factor in the country’s strategy, according to Mr. Boyamba, as it ensures products can be transported once produced. Investing in base infrastructure such as transport, education and health is providing the key foundations that will allow future industries to prosper.

The maritime system offers huge potential but distances involved are great and investment is required. The Port of Brazzaville manages an important hinterland, with boats traveling from Brazzaville by river to Liranga, which is 600 kilometers from the capital. Boats then continue to Kisangani in the Democratic Republic of the Congo, which is 800 kilometers away, then enter Betou, before finally ending their journey at Bangui, which amounts to a 2,000-kilometer journey overall.

At Betou, there are timber yards, ore, and agriculture. There also links by the River Alima to Leketi, where a port was built and inaugurated by President Sassou Nguesso in 2009. From there, Gabon can be reached by road while the Central African Republic’s imports from Gabon can arrive at Leketi via roadway or river. Meanwhile in Oyo, on the River Alima, a larger-scale port is under construction, another part of the secondary ports strategy of the Port of Brazzaville.

Oyo is served by the Oyo Ollombo airport, which is the country’s third international airport and is designated a special economic zone. Such constructions will play a key role in the country’s wider logistics developments, and there are numerous opportunities for foreign investors.

“One of the key challenges is to continue to develop public-private partnerships,” says Alain Berquez, Director General of Airports of Congo (AERCO). “It is also in the interest of the State, since external operators will handle the management, maintenance and preservation of the state infrastructure.”

Oyo’s port will also be part of the special economic zone. It is a strategic choice given its geographical situation as it gives access to the border with Gabon, and the Alima River is navigable all year round. Significant fish farming could be developed there, facilitated by the availability of two-day river transport to Brazzaville.

The Likouala-Mossaka River provides access to Mossaka, Makoua and Etoumbi, from where Mbomo and the Odzala National Park can be reached. A port will be built on this river, with the first stone laid to allow for the transport of palm oil to be produced in Mbomo by the Malaysian company Atama Plantation Sarl. Initial expectations are for palm oil production of about 300,000 tons per year. Such quantities can only be transported to Brazzaville by waterways. The river is not navigable year-round, but there are plans in place to widen and deepen channels to allow 12-month access.

From Mossaka, one reaches the department of Sangha, which is 980 kilometers away from Brazzaville. At Ouesso, called the capital of cocoa, the port has already been rehabilitated with its dock extended to 100 linear meters. Because of the strategic importance of Sangha, owing to the presence of the BDEAC (Central African State Development Bank) and big timber industry companies such as CIB in Pokola and IFO in Gombe, not to mention its international airport, the construction of a bigger port is planned.

A road is also being constructed from Ouesso that will link Congo with Cameroon via Sangmélima. In all, this route runs from Pointe-Noire to Brazzaville to Ouesso and Sangmélima to Cameroon. Another highway from Ouesso connects Congo with the Central African Republic. The dam that will be constructed to the west of Ouesso will serve the mining of ore, which, with the availability of roadways as well as railways, can be sent to Kribi in Cameroon or to Pointe-Noire. This is all part of the National Development Plan that is running between 2012-2016.

Other new ports are being built, notably near Brazzaville and Liranga, because the River Oubangui is only navigable six months of the year owing to low-water levels. The government is also financing the construction of a roadway between Liranga and Impfondo that will allow easy road access to the Central African Republic from Brazzaville. Betou, where logging operations are developing, will also see a port built, as currently there are more than 100,000 cubic meters of wood awaiting transport to Brazzaville.

To accomplish all of this, the government is actively seeking investors to develop the transport sector through partnerships. Opportunities are also available at the Port of Pointe-Noire and within the economic zones.

The Republic of the Congo is well placed to make the most of its location, with a seaboard featuring the only deepwater port in the Gulf of Guinea. With its capacity, the Pointe-Noire port is a natural gateway to the Atlantic Ocean and can act as vital access for the opening up of and development of Central Africa.

This axis stretches to Brazzaville, Kinshasa, Bangui and Ndjamena, connecting railways and rivers in Congo and then with Central African Republic and Chadian roadways. With the intersecting of a communication network and the coastal highways that connect Angola and Gabon, Pointe-Noire enjoys a unique geographical situation that makes it the distribution port for the entire region.

By developing its ports, roads, and railways, the republic is connecting all corners of its territory, enabling greater production of goods as well as commerce and trade. It is also linking up the entire region as it builds a modern transport and logistical network, and the development of the Autonomous Port of Brazzaville and its secondary ports are set to serve as a vital linchpin in this process.