A growing industry with tremendous potential

Article - October 24, 2011
Hydroelectric power provides 95 per cent of Cameroon’s energy output and a 216 MW powerplant at Kribi is the country’s first foray into gas-fired technology 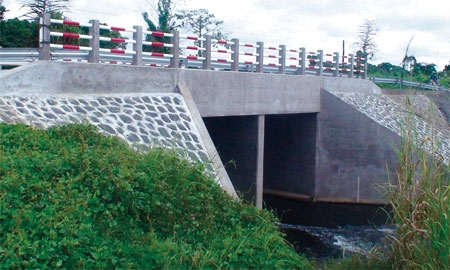 The coastal town of Kribi lies at the mouth of the River Kienke about 93 miles south of Douala. Known for its pristine beaches and seaside villas, this is the future location of a deepwater port that will serve as an export platform for the sub-region. The seaport will have berthing depths of 65 feet, enough to allow the latest generation of ocean-going vessels to moor here.

About six miles northeast of the seaport, the Kribi Power Development Company (KPDC) is also developing a 216MW power plant that will run on indigenous natural gas from the National Hydrocarbons Corporation (Societe Nationale des Hydrocarbures, SNH). KPDC is an affiliate of US-based AES, which owns Cameroon’s utility company AES-Sonel. The plant at the 16-hectare site of Mpolongwe will also run on diesel fuel in the event of gas shortages. With further investment, its generation capacity could be scaled up to 330 MW. It is Cameroon’s first foray into gas-fired technology.

“The Kribi Power Station is the beginning of a series of investments to be made by the Government and its partners. Cameroon will never be the same again because we are going to be by far more powerful than we have been in the past, at least energy-wise,” Prime Minister Philemon Yang told reporters in March.

Hydroelectric power provides 95 per cent of energy output in Cameroon. But extensive droughts linked to global warming have reduced the disposable electricity capacity at AES-Sonel, leading to chronic deficits in the national grid. In 2009, electricity output was down 1.2 per cent year-on-year due to technical problems at power plants. Production was expected to rebound by 3.2 per cent in 2010, but was still below the 6 per cent annual increase in demand. This has a negative impact on Cameroon’s overall economy as manufacturers are unable to work at full capacity.
Kribi Power Station is thus seen as a competitive tool that can not only bring total energy output up to 3,000 MW by 2020, but also as a way to improve the business climate. According to President Paul Biya, the plan is to harness indigenous resources by embarking on a new generation of power plants along the Sanaga River, namely Lom Pangar, Memve’ele and Nacthigal.

Natural gas will play a growing role in the country’s energy mix. The Sanaga Sud field is located 8.7 miles offshore from Kribi and has been selected by SNH as the main provider for the future electricity plant. The gas will help absorb energy deficits as well as generate government revenue through exports of liquefied natural gas (LNG). Policymakers also think it can be marketed in the sub-region as liquefied petroleum gas (LPG).

“Recently, Cameroon has embarked on the development of its natural gas reserves estimated at 5.5 trillion cubic feet (Tcf). The deposits are located essentially in the Rio del Rey and Kribi-Sanaga-Campo oil fields. In addition, we have unexplored reserves estimated at 20 Tcf. These are the resources that Kribi Power Station will now be able to maximise,” says Minister of Energy and Water Resources Michael Ngako Tomdio.

The power plant at Kribi carries a price tag of $390 million (£243.8 million). In terms of project finance, $132.5 million (£82.9 million) will be provided by Lome-based Ecobank in the form of a commercial loan. The African Development Bank (ADB) will put in place a low-interest facility valued at $64.3 million (£40.2 million) while another $193.2 million (£120.8 million) is expected to come from other sources. Contracts for the supply of natural gas were signed in January 2009.

Kribi Power Station is scheduled for delivery in September 2012. By then, double-circuit transmission lines will be able to forward the electricity over 62 miles to a substation in Mangombe in Littoral Province. From there, Kribi will power the southern grid. Once online, the plant will bring total grid capacity to 1,233 MW. As of 2011, Cameroon sourced 720 MW of energy from hydroelectric stations along the River Sanaga, or 58.4 per cent of the total. Fuel-powered electricity stations contributed another 513 MW, or 41.6 per cent of the total.

Last March, the Prime Minister laid the foundation stone of the future power station, which will be built by Wartsila and Siemens. Both companies are involved in the installation of 13 electricity generators as well as a special processing unit. According to the general manager of KPDC, 900 workers have been hired to work at the site in Mpolongwe over a period of 23 months.

Meanwhile, locals who lived in four villages surrounding the future electricity plant are being relocated. The project has followed World Bank guidelines for large-scale infrastructure by issuing an Environmental and Social Impact Assessment (ESIA). This includes a Resettlement Action Plan (RAP) for the Bakola communities of Mpolongwe, an ethnic group related to rainforest dwellers also known as pygmies. In addition, AES-Sonel has prepared a Community Development Plan (CDP) that is especially concerned about the power plant’s impact on households that depend on agriculture, commercial logging and hunting.

“Beyond the gas-fired plant at Kribi, the way forward is renewable energy. Studies have revealed immense potential in Cameroon to harness this form of energy. My Ministry is carrying out a national programme to develop biogas for which the feasibility studies have already been finalised,” says Mr Tomdio.

lukong Pius Nyuykonge
100% of 1
Sir(s),
I am a final year student engineer in Renewable energies specialising in Biomas in the Higher Institute of the Sahel.Please help me with an internship opportunity in Biogas project in Cameroon.
tel:7062 7451,9324 8995,2272 9197,lukongpius2007@yahoo.fr
Best Regards.