On the right track

Article - October 25, 2011
Millions being spent to improve infrastructure and quality of life 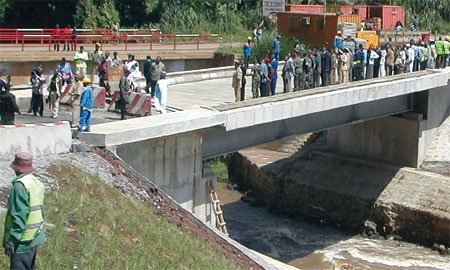 Just after winning the last general elections in 2004, President Paul Biya stated: “Our country needs more roads, bridges, dams, port installations, telecommunications, rail and air links – and we are going to provide them.” He announced that the return of major projects to Cameroon, after financing for infrastructure dried up when the economic crisis wreaked havoc in the country between 1985 and 1995, and advised Cameroonians that their country was about to become a vast construction site as in the first prosperous years of the country’s independence.

Seven years later, as the next presidential elections loom in October, the majority of President Biya’s projects are now either nearing completion or are set for launch.

Additionally, in June, the Government announced the issue of CFA 200 billion (£273 million) in treasury bonds to help finance its slew of infrastructure projects, including a deep sea port, hydroelectric dams, water pipelines and roadworks, which will help pave the way for the billions of euros in investment now flooding into the country’s mining sector.

The announcement followed on the heels of the Government’s decision earlier this year to increase its borrowing for the purpose of infrastructure development.

Over the past few years, urban development programmes have rehabilitated city roads and contributed to the construction of 10,000 social housing units in Yaounde and Douala. In collaboration with the World Bank, the Project for the Development of Urban Areas and Water Supply has worked to improve the precarious housing situation in various cities throughout the country.

Perhaps the most successful example is Douala, the nation’s commercial capital, where investment in the main roads leading to the Port of Douala, until now the nation’s most important logistics hub, have helped to boost commercial activity while decreasing travel times and improving basic services for the city’s residents.

The port handles approximately six million metric tonnes of cargo per year and is currently the point of departure or arrival for more than 95 per cent of the Cameroon’s total imports and exports. Most goods destined for neighbouring landlocked countries, especially the Central African Republic, Chad and, to a lesser extent, the Republic of Congo pass through this port.

The completion of the Douala Infrastructure Project, which was carried out with the support of the World Bank’s International Development Association and the French Development Agency in addition to the central and municipal Governments between 2002 and 2009, has revitalised various Douala neighbourhoods while improving more than 17 miles of road. At the beginning of the project, approximately 155,000 vehicles travelled these roads on a daily basis. Today, the daily average is 223,000 vehicles.

In addition, cost savings from the project helped finance the development and upgrading of depressed areas, especially the provision of basic services to the poor, including 500 metres of paved roads, 1,080 metres of walkways, 1,350 metres of pipe-borne water network, 3,800 metres of electricity cabling supplying 16 street lights and the construction of more than 800 metres length of sewage drain, leading to noticeable improvements for residents and further World Bank urban projects in five other cities.

Now, the Government is planning the construction of a second bridge over the Wouri River there, which will further alleviate traffic congestion. French aid to the tune of €181 million (£158 million) has been provided for construction. The Government has also reached a tentative agreement with a Chinese firm for the first 43-mile section of the two-lane Douala-Yaounde-Bafoussam-Douala motorway loop, which should reduce the number of accidents on this road, considered one of the deadliest on the continent.

Outside of Douala, the Government’s flagship infrastructure project is the new £375-million deepwater port of Kribi. Launched in response to the spectacular growth of Cameroon’s mining sector, in particular bauxite, iron, nickel and cobalt, the port will make up for shortfalls in Douala, which is limited to vessels of 15,000 tonnes. The Government hopes to convert the new port into the West African container hub, while activating sub-regional integration through the Kribi-Bangui (Central African Republic)-Kasangani (Democratic Republic of the Congo) transport and development corridor and by-passes leading to other CEMAC countries such as Equatorial Guinea, Gabon and Congo.

In September 2010, Australian iron-ore mining company Sundance Resources and Chinese construction company China-Africa Construction agreed to begin construction of a complementary deepwater port at nearby Lolabe with a connecting rail link to Kribi, while Rio Tinto Alcan will build a one-million tonne aluminium smelter at the new port. Cameroon Alumina will build 535 miles of railway to link their mine at Ngaoundal to Kribi.