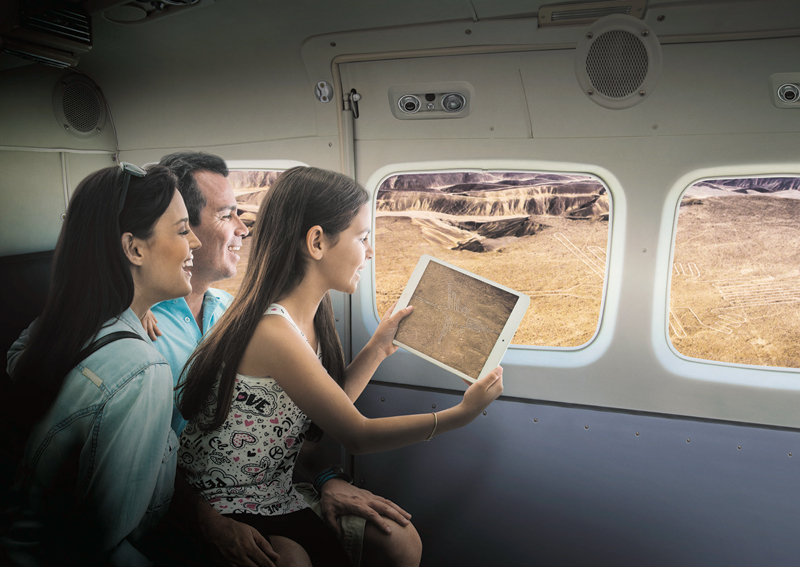 Situated southwest of Peru along the Pacific Ocean, the region of Ica sits in the middle of predominantly desert pampas land. The región was once home to the ancient Wari, Nasca, and Paracas cultures. Here, you can practice sandboarding and stroll on the dunes of the Huacachina.

The region is also known for its vineyards. The best season to visit is March, for the celebration of the Festival Internacional de la Vendimia (international harvesting festival), when colorful parades are organized and grapes are offered to passers-by.

Ica is a traditional Peruvian city, with a mix of modern and colonial buildings, traditional markets, old churches and charming cafés. But truth be told, the best in this part of Peru resides outside of Ica, where there are two marvels not to be missed: the Ballestas islands in Paracas, and the world-famous Nasca Lines.

The Islas Ballestas are sometimes dubbed “the por man’s Galapagos” because they are so wild, remote and full of wildlife. You can only access them by boat through one of the many local travel agencies. On the way there, you will see the famous Candelabra geoglyph, a giant figure carved out of the hills. No one knows by whom or when it was made. Some relate it to the neighboring Nasca lines, whereas others believe it is a representation of the Southern Cross and that it was once used as a beacon by sailors. On the islands, you’ll see plenty of birds – pelicans, cormorants, Humboldt penguins – and if lucky, when gazing at the sea, dolphins.

Situated in the Pampa colorada near the town of Nasca, the Nasca Lines are a series of gigantic figures carved on the dark, rocky terrain. A UNESCO World Heritage Site, this is one of humanity’s most enduring mysteries. There are hundreds of figures, from triangles and rectangles that are several kilometers long to stylized animals and birds: monkeys, condors, hummingbirds, fish, sharks, orcas and lizards.

The great mystery is that they can only be seen from high above but not only, contrary to popular belief, from a plane: you can actually see them from atop the surrounding hills. They were first mentioned by the Spanish conquistador Pedro Cieza de León in 1553, and rediscovered in 1927 by Peruvian archaeologist Toribio Mejia Xesspe.

There are many theories surrounding this extraordinary site. Some scholars say it is a representation of the cosmos because the lines seem to converge when observed at the winter solstice. But there are also many other interpretations, the most widespread being that these mysterious figures were made by alien visitors from outer space