Four years have passed since the Pacific Alliance united Peru with Colombia, Mexico and Chile and the benefits on the agreement are now clear to see 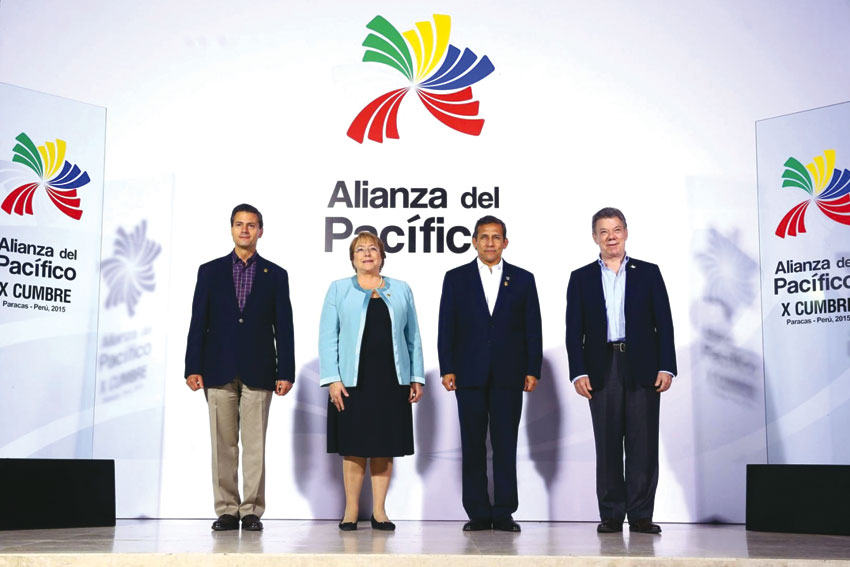 THE FOUR PRESIDENTS OF THE FOUNDING NATIONS OF THE PACIFIC ALLIANCE, FROM LEFT: ENRIQUE PEÑA NIETO OF MEXICO, MICHELLE BACHELET OF CHILE, OLLANTA HUMALA OF PERU, AND JUAN MANUEL SANTOS OF COLOMBIA
SHARE

Peru has enjoyed sustained economic expansion during the past decade, but with commodity prices falling in more recent times the country’s government has been exploring new avenues for growth.

Numerous sectors of the Andean nation’s economy have already enjoyed rapid growth including markets such as insurance and financial services, and the result has been an enlarged and affluent middle class. With this have come greater amounts of disposable income, much of it derived from the successes of the country’s extensive export-led industries.

Such developments have led the International Monetary Fund to label Peru as one of the “brightest” economies in the world and the South American country is now forging ahead with international expansion by bolstering its ties with neighboring territories.

Indeed the tenth Pacific Alliance summit took place in the seaside town of Paracas earlier this year and marked a seminal moment for all the countries involved and the attending presidents of the nations. Peru, along with Chile, Colombia, and Mexico, as well as 2013 entrant Costa Rica, agreed further integration between their respective capital markets and developments to integrate health care, immigration and infrastructure, prompting hopes that further growth will now be enabled.

Such measures are likely to resonate across the region and the impact of the agreements will reverberate amongst both member and non-member nations. The five countries make up around 40% of Latin America’s GDP and the collaboration makes the Alliance’s combined economies greater in size than Brazil’s.

“The challenge for the Pacific Alliance is to strengthen education. It is also necessary to strengthen small and medium enterprises. We need skilled people”

Yet it was only in 2011 that the Pacific Alliance was formed but since then it has proven to be a stabilizing force for those involved that has generated consistent results and an ever-increasing economic fluidity between participants. Tasked with objectives such as improving the movement of labor and integrating services and capital, the four major players Peru, Chile, Colombia, and Mexico are now seeing tangible rewards from their multilateral cooperation.

Integration is running deep throughout the alliance, with the latest agreement - the Declaration of Paracas - set to further bolster the set-up of the MILA stock exchange, made up of the equity markets in Mexico City, Santiago, Bogota, and Lima. Indeed, there are clear benefits of working with an exchange where the market cap is in excess of $950bn.

New measures will recognize initial public offerings (IPOs) between the five countries while the cross-market trade of an increased variety of instruments will also be enabled. International investment in the region will also be driven by the creation of the Finance Ministers’ Council, which is set to attempt to work with each country’s respective tax authority to avoid taxing investors twice.

Challenges facing the quintet are clear, not least the downturn in commodity prices that are impacting on the prospects of Colombia, Peru, Mexico, and Chile more than others, but the Alliance is also aiming to work together on public spending proposals, cutting red tape and simplifying legislation to create greater opportunities for infrastructure projects in the region.

“I know of no process more successful than what we have achieved so far. Such fast integration has aroused much interest around the world”

Easing visa restrictions between member countries is also being introduced to enable more efficient labor movements and the group is also engineering a Pacific Alliance-wide healthcare group designed to vastly improve the purchasing power for the combined nations. The Alliance’s nations boast a total population of more than 200 million, with the aim being to greatly improve the ability to buy health-related products at better rates.

Strengthening such cross-border ties has already helped the Alliance participants to expand their economies and it comes in stark contrast to nations such as fellow Latin American powerhouses such as Brazil, which is in the midst of an economic contraction that could have wider repercussions on the region.

Yet the Pacific Alliance’s combined economies are being predicted to grow consistently over the next few years, with their total GDP of $2.2tn enticing foreign investment. Regulatory improvements have freed up potential, enabling unemployment figures to drop and domestic consumption to rise and there are clear indicators that expansion between member states will be self-fulfilling.

Part of this is thanks to stronger ties with the U.S. providing benefits for member nations. Foreign direct investment from the USA into Latin America fell between 2013 and 2010, yet Pacific Alliance countries increased their share, from 62% of the $27bn in 2013 up from 55% of the $31bn in 2010, according to the Peterson Institute. Such trends indicate that for Peru and its fellow Alliance members, prospects remain remarkably bright despite the considerable challenges being faced by their Latin American neighbors.