Across “The Land of the Eternal Blue Sky”, nature and one of the oldest civilizations on earth continue to coexist hand-in-hand. 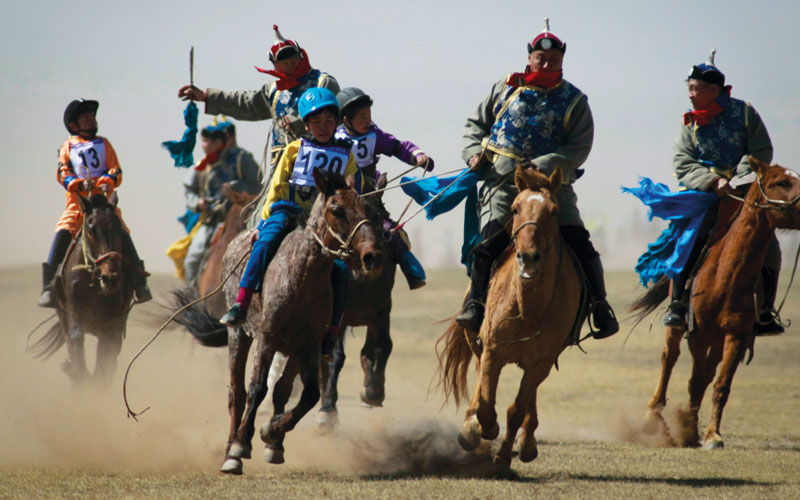 Known as ‘The Land of the Eternal Blue Sky’ thanks to being soaked in sun for two-thirds of the year, Mongolia has become a big hit on the ‘to-visit list’ of tourists keen to explore its rich history and stunning scenery since its democratic revolution in 1990.

With just under 3 million Mongolians populated in 972,000 square miles, and 45% living in the capital Ulaanbaatar, Mother Nature has truly been left to live among one of the oldest civilizations on earth. This is the country’s enduring appeal, with nature and the nomadic Mongolian people living hand-in-hand. Almost half live in ‘Gers’, portable habitations to allow the population freedom to move up to three times per year, as century-old traditions continue to live on today.

‘Go Nomadic, Experience Mongolia’ is the country’s tourism slogan and it would be hard to resist the lure of attractions such as the huge Gobi Desert and breathtaking Khuvsgul Lake. “Once you discover Mongolia you will come back again,” says Ts. Oyungerel, Mongolia’s Minister of Culture, Sport and Tourism. “We invite American tourists to visit ‘The Land of the Eternal Blue Sky’.”

The world-famous Gobi is one of the country’s biggest pulls. Spanning over 800,000 square miles, it includes the impressive Gobi Gurvan Saikhan National Park, named after the mountain range that surrounds the east of the park, and some of the largest sand dunes in the country at Khongoryn Els – nicknamed the ‘singing dunes’ due to the noise they make on a windy day. Camel rides and jeep excursions with local nomads are just some of the activities on offer to explore the desert.

With the Gobi to the south, the stunning Khuvsgul Lake, the second-largest freshwater lake in Asia, sits to the north-west and is complemented by the surrounding mountain ranges, one of which is the Sayan range. The highest peak is the Burenkhaan that stands at 3,492 meters tall. Restaurants offering traditional Mongolian cuisine, including mutton-based barbecue dish khorkhog and the national drink airag, surround the water while a ferry offers the chance for stunning views of the surrounding scenery.

That stunning scenery has been left untouched since the days of Ghengis Khan, Mongolia’s most famous son who united many of the Asian nomadic tribes to help form the Mongol Empire, which went on to become the largest contiguous empire in history after his demise.

Mongolia is steeped in such history and tourists can soak some of that up at the Winter Palace of Bogd Khan, the country’s eighth Living Buddha and last king. Situated in the capital, the palace has been turned into a museum and includes six temples that house some of the former king’s prized possessions and Buddhist artwork. Some of the rich history of the country can be experienced here, as well as the Choiring Lama Museum, a Buddhist monastery also in Ulaanbaatar which used to be occupied by the brother of Bogd Khan, Choijin Lama Luvsankhaidav.

The popular Kharkhorin Tsenkher hot spring and Khustain Nuruu National Park, which enjoys the Tuul River running through, provide more natural habitats to be enjoyed by the growing number of tourists putting Mongalia high up on their list of places to explore.