Ahead of the World Humanitarian Summit in Istanbul, Kuwaitis break all records as humanitarian donors. 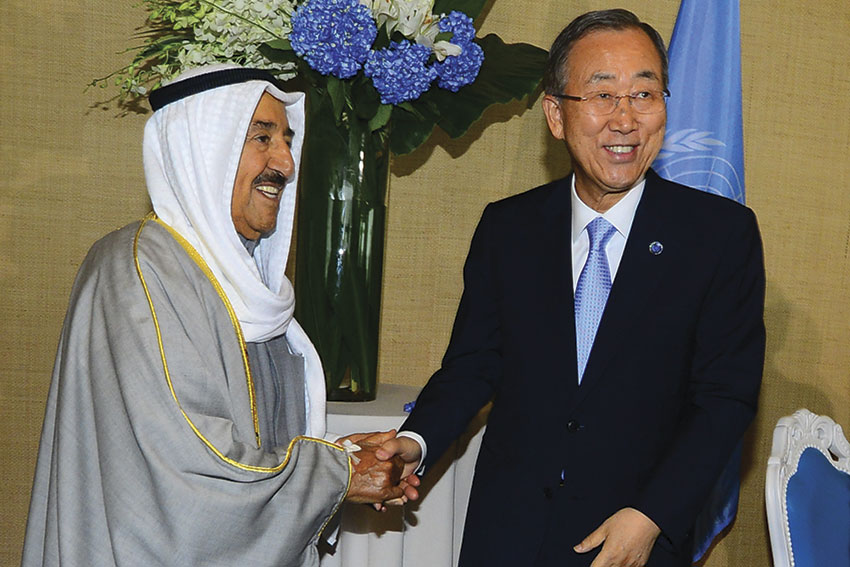 Kuwaitis are well-known for supporting people all over the world who are suffering from humanitarian disaster. In fact it was in 1953 that the Kuwaiti tradition of generosity was transferred to government policy and elevated to cabinet level. This was the year that The Public Authority for the South and Gulf was established. This government entity, far ahead of its time worked on South-South cooperation specifically needed to mitigate the humanitarian disasters and conflict that sprung up during this period of decolonization.

The establishment of the Kuwait Fund for Arab Economic Development (KFAED) soon followed as a mechanism to disperse grants to people in need all over the Middle East. This mandate since expanded to cover the world, aimed primarily at construction, health and education.

Today, the amount of money dispersed by Kuwait specifically for humanitarian aid is staggering.

“We have contributed over $4.1 billion to humanitarian efforts recently and it has been acknowledged by Ban Ki Moon and John Kerry, that per capita, Kuwait is by far the most generous contributor in the world”, explains Dr. Sheikh Mohammad Al-Salem Al-Sabah, Kuwait’s former Minister of Foreign Affairs.

Most recently, this aid was largely focused on alleviating the suffering of the Syrian people, whose civil war shows no sign of abating. Within living memory Kuwaitis suffered full-scale war when Saddam Hussein’s army occupied their country in 1990. It is perhaps the memory of this tragic incident, and seeing similar images in a neighboring country, that on top of a tradition of kindness has led the government of Kuwait to provide billions needed to feed, clothe, shelter and support the endless stream of refugees that have fled the battlefields of Syria.

Even the Kuwait Red Crescent Society (KRCS), which celebrated its 50th anniversary earlier this year, marked the event by launching a donation appeal to provide aid to the besieged Syrian town of Madaya. Approximately 42,000 people are suffering there, cut off from even basic food supplies.

Reflecting on the willingness of Kuwaitis to help strangers, Dr. Hilal Al-Sayer, Chairman of the KRCS remarked, “Giving and generosity are in our genes. From New Orleans to Syria, we are committed to being there and helping in times of need. We understand how fortunate we are.”

In fact United Nations (UN) Secretary General, Ban Ki Moon officially acknowledged the generosity of the Kuwaiti spirit. In September of 2014 he convened a special ceremony of the UN headquarters in New York to recognize the role of Kuwait’s head of state, HH the Amir as a humanitarian leader. During this ceremony he stated, “It gives me great pleasure and honor to be here today to recognize the leadership of His Highness Sheikh Sabah Al Ahmad Al Jaber Al Sabah, Amir of Kuwait… We are sitting together with a great humanitarian leader of our world”

HH the Amir has also worked to encourage other donor nations to provide more support during this time of humanitarian crisis. As recently as February he co-hosted a donor conference in London aimed at increasing global contributions to supporting the victims of humanitarian disasters.

Leading by example is clearly an effective tactic, as UN Resident Coordinator in Kuwait, Zineb Touimi-Benjelloun, notes, “Kuwait is an example of a humanitarian leader that we hope will inspire other countries to contribute so generously. This commitment to the UN agenda is far beyond expectations and recommendations and we are thankful for their ongoing commitment and participation at the first World Humanitarian Summit.”

Given the decline in oil price and diminishing state budgets for oil exporting economies such as Kuwait’s, some experts have predicted that contributions will be curtailed. To this, Sheikh Salman Sabah Al-Salem Al-Homoud Al Sabah, Kuwait’s Minister of Information and Minister of State for Youth Affairs begs to differ, “Of course with low oil prices we are contemplating our future, but on humanitarian matters Kuwait will not hesitate to support any needs from the international community, especially in the humanitarian efforts of the UN.”