On the path to reunification

Cypriot President Nicos Anastasiades and leader of the Turkish Cypriot community Mustafa Akıncı have met on numerous occasions since the latter was elected last May, in order to try to bring forward a deal to reunite the ethnically divided island. With the economy recovering well and  a reunification agreement looking more tangible, Cyprus is heading for a new era of peace and prosperity 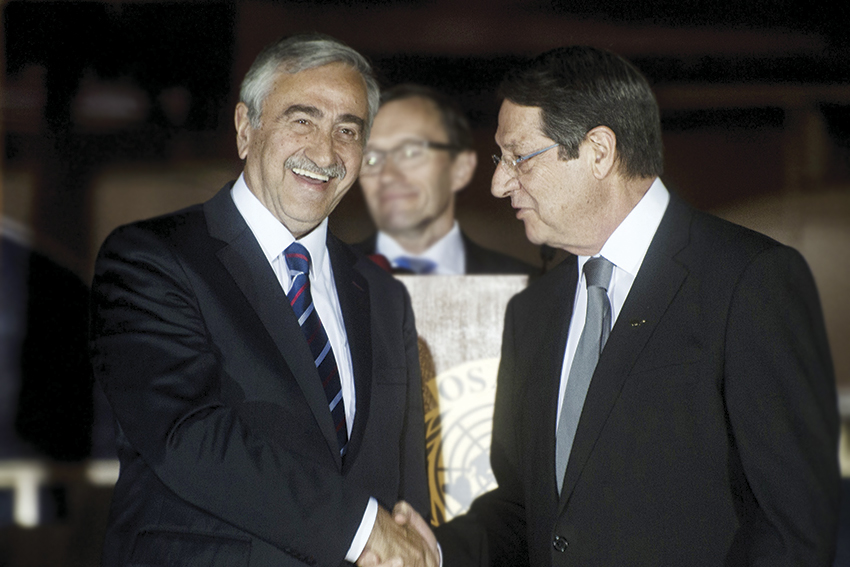 With so many countries of the Eastern Mediterranean beset by instability and violence, it’s easy to lose sight of what’s been happening in Cyprus, where the mutually reinforcing dynamics of economic recovery and political convergence have led two confrontational communities to take steps towards overcoming their turbulent past for the sake of a more prosperous common future.

“Doing away with the division and occupation of Cyprus is the historical responsibility politicians of this island share,” says President Nicos Anastasiades. “The aim is to bequeath to the future generations a reunited homeland, full of hope and potential; a peaceful island where individuals of different ethnic or religious background are able to peacefully coexist in conditions of security and prosperity.”

The “Cyprus problem” is a legacy of 1974, when militant Greek Cypriots supported the military junta that had taken power in an Athens coup and attempted to annex Cyprus as a Greek province. After fighting, terrorism and massacres claimed over 5,000 lives, the invasion of Turkish troops left Turkish Cypriots in control of roughly 40% of the territory.

In 2004, the United Nations proposed the Annan Plan to resolve the territorial dispute. The  plan would have seen the creation of a federation of two states, but in a referendum it was rejected by more than three quarters of Greek Cypriot voters.

“The aim is to bequeath to the future generations a reunited homeland, full of hope and potential; a peaceful island where individuals of different ethnic or religious background are able to peacefully coexist in conditions of security and prosperity”

Eleven years on since the failed Anan Plan and there are now fresh hopes for a resolution. Last September before the UN General Assembly, President Anastasiades unfolded a road map on which all routes lead to a constitutional reboot in which Cyprus becomes “a federal state in a bizonal, bicommunal federation with political equality, a single sovereignty, a single international legal personality and a single citizenship for all its people.”

It may sound like a fairly straightforward arrangement, but as so often is the case, the devil is in the details. Civil war and partition resulted in the displacement of hundreds of thousands of people in both communities. Greek Cypriots were expelled from the northern half of the island, where they had been the majority, and driven into the south.

In addition, around half of the 250,000 present-day inhabitants of the Turkish Cypriot community are immigrants from the Turkish mainland or their descendants who were induced by Ankara to settle on the island after it was divided. They have had time to put down roots – often enough on confiscated land. How can one negotiate restitution or reparations given that kind of conundrum?

In May of this year, voters in the Turkish Cypriot community elected Mustafa Akıncı as their leader. Conventional wisdom characterises him as a moderate unencumbered by the dogmatic extremes of nationalism. He appears to be pretty much on the same wavelength as the Cypriot president, who has praised Mr Akıncı for showing the “political courage and resolve to decisively move forward in order to materialise the joint vision of our people.”

Between May and October the two leaders met 10 times, agreeing to a further six meetings during November in a bid to accelerate peace talks that could lead to the eventual reunification of the island.

Speaking on the economic benefits of reunification in November, UN special envoy to Cyprus, Espen Barth Eide, said, “In the long run, there will be more growth and more money to distribute, we need to prepare for potential growth.”

Speaking on the economic benefits of reunification in November, UN special envoy to Cyprus, Espen Barth Eide, said, “In the long run, there will be more growth and more money to distribute, we need to prepare for potential growth”

The change in the political climate coincides with signs of a return to the economic growth that Cyprus was registering before the crunch point of 2012-2013, when the European Union “troika” stepped in with a $13 billion (£8.55 billion) credit that allowed local banks to ride out the crisis while fulfilling their structural reform and repayment obligations.

“It has worked well, it is working well, and Cyprus continues to make progress under the programme,” acknowledges Jerry Rice, an IMF spokesperson who confirms that Nicosia’s debt load appears to be stabilising and the government met all fiscal targets for the first half of 2015.

Meanwhile, tourism – an important source of jobs that generates €2 billion (£1.4 billion) in annual revenues – is showing signs of recovery after losing its second-largest market due to international sanctions against Russia.

And geologists indicate that a massive pocket holding five trillion cubic feet of natural gas has been found within Cyprus’ offshore Exclusive Economic Zone. Unconfirmed reports claim exploratory talks have been held with Egypt (which controls an even larger gas field that abuts on Cyprus’ “Aphrodite” reserves), Italy’s ENI, and even Turkish energy giants on synergetic initiatives for developing this game-changing resource.

In that light, it would not be too surprising if the inhabitants of northern Cyprus should decide it would be in their own best interests to strike a deal in return for a seat at the table when the fruits of this newfound prosperity are distributed. As President Anastasiades says, “Cyprus can become a model for the region, and the solution of its problems may very well have positive ripple effects to our conflict-ridden neighbourhood. Furthermore, reunification can unleash great economic potential both for the local economy and international investors.”