Article - October 24, 2013
Vertically integrated Kuwait Petroleum Corporation is one of the biggest contributors to both economic and social development 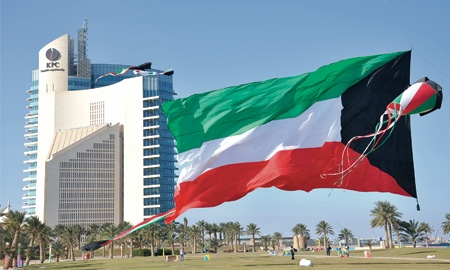 AS A GROUP, KPC IS ACTIVELY INVOLVED IN EVERY ASPECT OF THE OIL AND GAS INDUSTRY
SHARE

Kuwait’s energy sector has seen quite a lot of changes in the seven decades since large oil reserves were first discovered by the formerly US-British owned Kuwait Oil Company (KOC).
Largely in foreign hands until 1976, the oil industry blossomed thanks to foreign partnerships and continues to bear fruit thanks to the continual technical and know-how transfer to the local workforce.
Independence from Great Britain came in 1961, yet it wasn’t until 1972 that Kuwait was prepared to take on a large stake in the hydrocarbon industry. That year, the government acquired a 25 per cent in KOC, followed two years later by a 60 per cent share through a “participation agreement”.
Another two-year gap elapsed before Kuwait’s government opted to acquire 100 per cent of KOC and in 1980 it established the Kuwait Petroleum Corporation (KPC) as an umbrella company for KOC and all other nationalised and newly created subsidiaries.
KPC is, therefore, an enormous vertically-integrated conglomerate responsible for the nation’s hydrocarbon interests both locally and throughout the world, and its importance in the global energy sector cannot be understated.
Indeed, entrusted with one-tenth of the world’s oil reserves and pumping nearly 2.8 million barrels per day (bpd), KPC was the 10th largest oil producer in 2012 and is capable of restoring balance to global production levels given setbacks or problems in other oil-producing companies.
The company aims to raise production to 4 billion bpd – including a larger share of low-sulphur products – in a bid to raise its profile even more and ensure confidence in the country’s capacities.
“In the future we would like to see low sulphur products and now we’re investing in our existing facilities and upgrading them to produce high quality products,” says Farouk Al-Zanki, former CEO of KPC.
Under the Clean Fuels Project, an undertaking of KPC subsidiary Kuwait National Petroleum Company (KNPC), the Mina Abdulla and Mina Al-Ahmadi refineries will be upgraded yet again with the most sophisticated equipment to not only raise daily output, but also to be able to process more environmentally friendly diesel oil.
Both refineries underwent modernisation in the 1980s, bringing capacities up to 460,000 bpd at Mina Al-Amadi and 270,000 bdp at Mina Abdullah.
KNPC, originally set up in 1960, is KPC’s oil refining, gas liquefaction and petroleum products distributing arm. It owns and operates the above-mentioned refineries as well as the Shuaiba Refinery, the first one built by a national company in the region. With an operating capacity of 200,000 bpd, Shuaiba also lays claim to being the world’s first all hydrogen refinery.
A fourth refinery, at Al-Zour, is in the planning and development stage. Once the Clean Fuels Project and the New Refinery Project are complete, KNPC’s refining capacity will jump to 1.4 million bpd.
Whereas oil makes up half of Kuwait’s GDP and represents more than 95 per cent of its export revenues, KPC is well aware of an overdependence on a single resource. For Nizar M Al-Adsani, current CEO of KPC, oil is capable of opening up new doors.
“The oil sector will take the lead. The sector is always innovative when applying new ideas. The idea of bringing in the private sector and partnering with them – procurers, vendors, contractors, etc. – and training with them is relevant. Local content is also relevant, either by employing Kuwaitis or by buying local products to help advance the private sector.
“The partnership is ongoing and there is a burden on the oil sector to innovate. The sector has also tried to privatise some of the non-core functions. Some of the gas stations and petrochemicals have been privatised and now we’re looking at bringing in some private companies – both local and foreign – to work on other new projects.”
“Once you develop a sector, others will follow,” adds Mr Al-Adsani. “So you have transport, marketing, distribution and logistics. They will all contribute to the value chain of the sector itself.”
Within the KPC family, already there are subsidies dedicated to these segments. Kuwait Oil Tanker Company (KOTC) owns and manages tankers for transporting crude oil, LPG and refined petroleum products; Kuwait Petroleum International (KPI), better known as Q8 markets Kuwait’s oil products abroad through more than 4,000 service stations; Petrochemical Industries Company (PIC) produces ammonia, urea, nitrogen fertilisers and polypropylene; and Oil Sector Services Company (OSSC) provides supportive services in the oil sector.
With such a large presence, both locally and globally, it is imperative that KPC upholds excellent corporate social responsibility standards. Although CSR is now a top priority, it wasn’t always this way, explains Mr Al-Zanki.
“For many years we focused on oil and gas production, not even looking at our human resources. But now with the new strategy we are putting a lot of emphasis on other activities not related to oil and gas because we want to improve the image of the sector,” he says.
On one hand, KPC increases its budget every year for training and HR development. The oil giant established the Supreme Council for Training and Education to ensure oil-sector employees receive proper education, and more recently, KPC expanded the Petroleum Training Centre. Also, employees are given great opportunities for career enhancement thanks to a company policy that aims to identify and develop potential executive leadership talents.
In terms of responsible environmental stewardship, KPC is allocating more capital towards mitigating CO2 emissions through its Greenhouse Gas strategy.
Mr Al-Adsani points to the Clean Development Mechanism project that Kuwait Foreign Petroleum Exploration Company (KUFPEC) is carrying out in Yemen. This KPC subsidiary – dedicated to upstream exploration interests in Africa, Asia, the Middle East, Norway, Australia and the UK – is working to “prevent waste gas from entering the atmosphere and instead use it to generate power for the local communities.”
This successful programme is also being carried out by Kuwait Gulf Oil Company (KGOC) in Wafra, where it has joint operations with Saudi Arabia, and Mr Al-Adsani says KUFPEC is trying it out in Australia now, as well.