New $45bn capital city to rise out of the desert

Government unveils an ambitious plan to build a smart-city the size of Singapore that aims to solve Cairo’s overcrowding issues. Officials boast it will include an airport bigger than London’s Heathrow, 1.1 million housing units, and 10,000 km of boulevards, avenues and streets 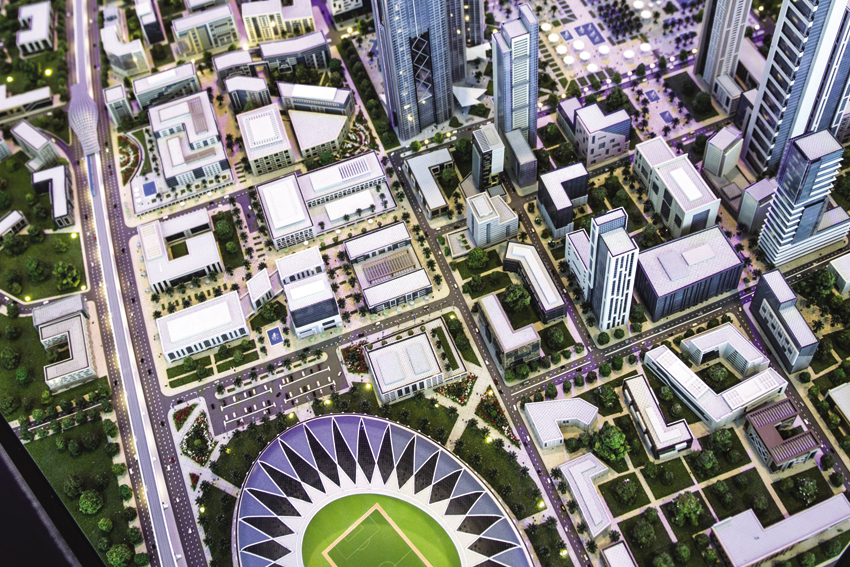 The moment was not lacking in drama at last March’s groundbreaking Egypt Economic Development Conference, when the host country’s Housing Minister, Mostafa Madbouly, unveiled a to-scale mock-up of what is someday going to be the country’s brand new capital.

Planned to be built up from scratch in the desert east of Cairo, about halfway between the current sprawling capital and the Suez Canal Development Corridor, the new city is meant to absorb the population overflow and bulky administrative apparatus of government and finance that the swollen, pollution-wracked Cairo can no longer accommodate.

“We are committed to the first phase,” Mr. Madbouly said in an recent interview. “We already have a very clear plan.”

One may be forgiven for wondering if the government of President Abdel Fatah El-Sisi is out to make a big political splash by pledging to achieve the impossible.

On the other hand, it could be rather a serious attempt to come to terms with the relentlessly inevitable, since demographers and planners all agree that Greater Cairo is on course to double its current population to top the 40 million mark by mid-century.

What its promoters describe as “a momentous endeavor to build the national spirit, foster consensus and provide for the country’s sustainable long-term growth” is a full-function, futuristically post-modern city covering 700 square kilometers, roughly the size of Singapore, that is to be grown from and remain attached organically to the mixed-use megacity development of New Cairo, which has been in operation for more than a decade.

Residents will be free to make use of amenities that include a theme park “four times the size of Disneyland” an international airport larger than Heathrow, over 1250 mosques and places of worship, 663 hospitals, 10,000 km of boulevards, avenues and streets and 1.1 million housing units.

Commentators, meanwhile, have remarked that the capital’s proposed skyline looks a lot like Dubai. In fact, the master planning and execution is to be carried out by Capital City Partners, a private investment fund led by Mohamed Alabbar, the Dubai financier at the head of the consortium that financed and built the emblematic Burj Khalifa tower in Dubai.

Nobody can say how much the Egyptian project will end up costing, but sums between $45 and $300 billion have been mentioned.

Who’s going to pay for it? Authorities insist that private investment capital from the Gulf region and elsewhere will cover everything.

Regardless of who picks up the tab, public opinion has not settled on whether this is a case of unjustifiable extravagance for a country with Egypt’s current problems or an essential and overdue reform.

Supporters point out there’s nothing inherently wrong with changing capitals; Pakistan, Nigeria, Brazil and others have done it without going bust or disrupting the delivery of government services.

And whatever may or may not happen out there in the desert, the original, inimitable Cairo will still be where it always has been for the past 1,000 years, a 20 minute ride by car or electric train from the new capital of a very old country.