Article - July 24, 2013
Mexican law dictates that during the first six months of a president’s term, he and his administration must draft a plan for development 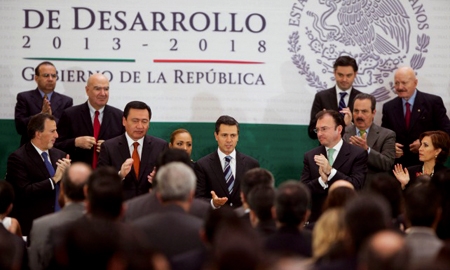 EARLIER THIS YEAR, THE PEÑA NIETO ADMINISTRATION REVEALED ITS GROUNDBREAKING PLAN, WHICH SEEKS TO BRING BENEFITS TO MEXICO FAR BEYOND ITS SIX-YEAR SCOPE
SHARE

When President Peña Nieto revealed his 2013-2018 plan in May, he described it as a plan to create “A Mexico where each person can write his or her own success story and be happy.”

Although the new National Development Plan covers just a six-year span, it is a far cry from a short-term vision. Indeed, it proposes profound changes in the areas of security, productivity, education and overall prosperity.

“Mexico has the historic opportunity to carry out a profound national transformation that triggers the development of our country during the next few decades,” said the President at the unveiling ceremony. “This is the moment to act for Mexico, to move Mexico!”

Under the general banner of taking Mexico to its maximum potential, the plan addresses five national goals. Firstly, to bring peace to the country in order to advance democracy and security. According to the government’s website, Mexico “must strengthen [its] social agreement, reinforce trust in the government, encourage social participation in the democracy and lower the rate of insecurity.

Secondly, the plan seeks to make Mexico more inclusive to its citizens by guaranteeing their social rights and by closing the gaps of inequality that divide people. This implies expanding basic services such as potable water, sewage, electricity, social security, education, food and shelter. The idea is that the advances made in creating equal opportunities will be the same ones that help transform the country.

The third aim is to improve access to and quality of education, as well as to create better links with science, technology and the productive sector. The desired result is a transition to a more knowledge-based society.

The fourth goal is achieve a more prosperous Mexico characterised by sustained growth in productivity and equal opportunities. This will happen when the right infrastructure is in place and when individuals and enterprises have improved access to strategic inputs that encourage healthy competition and innovation, and allow greater flows of capital, input and knowledge. “We should hold nothing back as we turn on the engines of growth,” states the plan.

The fifth objective of the National Development Plan, dubbed “Mexico with Global Responsibility”, is to defend and promote the nation’s interests abroad, while seeking closer, mutually beneficial and productive relationships with other countries. Free trade, movement of capital and a more fortified country image in terms of economy, tourism and culture will bolster Mexico’s global presence.

The plan also specifies the importance of developing certain key economic areas (namely, banking, oil and government spending) and providing greater legal certainty to investors. Confidence in the plan runs high, as it is the first time an administration has included specific delivery and evaluation metrics.

President Peña Nieto has started his term with guns blazing, and given that much of the plan is based on themes already included in the Pact for Mexico (signed by four political parties), it would seem that the 2013-2018 National Development Plan has a good chance of being realised.