Investors sought for a promising future

Public Road uses Western standards in building and paving roads to last for the long-term, while Gashuuni Gol and Map Road bring new technology to the table to further the sector and contribute to the government’s ambitious road targets. 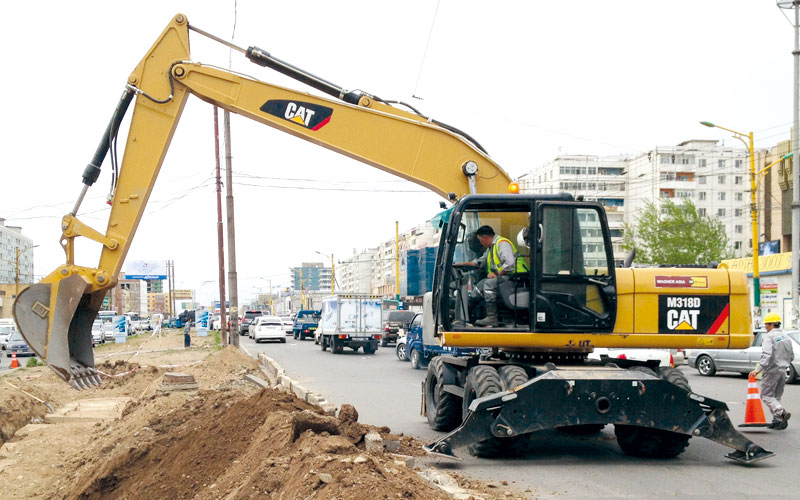 Mongolia’s road development plans are highly ambitious, yet thus far, things are seemingly right on track. “As of this year, 23% of roads are paved, which is quite close to the plan,” remarks Munkhbaatar Kh, Director of Public Road. However, with a target of building an additional 7,600 miles of road by 2020, the country’s road construction companies have quite the challenge set out for them.

Mr. Munkhbaatar explains that the biggest obstacle to meeting the objectives is finding adequate financing. “We all depend on the government budget, economic prosperity and international mining companies,” he says. “Once the financing is decided, we need to prepare human resources and equipment. As for Mongolia, which is a small country, human capital is one of the major issues as well.”

Public Road looks abroad for expertise and financing, especially to the U.S. – which like Mongolia, has vast expanses of largely unpopulated land between cities – and Europe. “Our foreign relations are excellent. We always attend human resource training programs. We have an exchange program with a German corporation and we receive specialists from this association and get training on human resources,” says Mr. Munkhbaatar.

“For investors from developed markets, my message is that the Mongolian road sector has a promising future. And in order to penetrate this market, we pursue long-term strategies compared to other companies,” adds the Director.

Mr. Munkhbaatar’s company, founded at the turn of the decade, also looks beyond the region for techniques and equipment. Indeed, its proposal for road management based on European standards won approval from the Mongolian Development Bank, which financed two of Public Road’s early projects.

“Our history may be short but our future will be long. We are the only ones adopting a high level of project standards to adapt to the environment of Mongolia. We are pioneers in introducing developed and Western standards; we don’t use the outdated Russian standard,” explains Mr. Munkhbaatar.

Speaking about upcoming projects, Mr. Munkhbaatar says the company is looking at taking part in the construction of the Chinggis International Group’s Mongolian Millennium Highway, which will span the entire width of the country from east to west. Public Road’s possible 12-mile chunk would connect to the new airport, says the Director.

In addition to building and paving roads, Public Road also does soil preparation, and thus, Mr. Munkhbaatar sees potential in working in the railway sector. “We have recently established a railway association and started preparing our human resources,” he says.

Public Road’s Director brings to the table not only years of experience in the road sector, but also a background in economics – a unique characteristic in a Mongolian road company head. Mr. Munkhbaatar points out that its three top priorities also set Public Road apart from the competition.

“The three main principles for our company are firstly, to work in an environmentally safe manner. Additionally, one of the biggest issues for Mongolian roads is the quality. Thus, we give the second highest priority to quality. Another problem in road projects is that they’re not finished within the time frame. This is our third principle, exemplified by the fact that all the projects we have executed were completed before the deadline.”

As part of the government’s Road Development Plan, local firm Gashuuni Gol will pave 18 miles of road between Undurkhaan and Choibalsan, two regional towns of the Khentii province in the East of Mongolia.

The company’s GD, Duger Altantsetseg, explains that the project will incorporate a new technique pioneered by her company. Instead of using crushed rocks and small stones as a foundation for construction, Gashuuni Gol has started using a 20cm thick special cement reinforced concrete foundation layer that can better withstand the harsh Mongolian weather. It is just the beginning of several new high-tech improvements that the company hopes to incorporate with the help of foreign partners.

“With advanced technology there will be no limit to build the roads that Mongolia needs, and we will be there to do it,” she says.

Since its establishment nearly a decade ago, Map Road has build up a successful track record as an assistant executor on several infrastructure projects, specializing in artificial facilities. Now with solid reputation under its belt, it hopes to become a direct contractor and collaborate with foreign companies.

According to the Executive Director, Mr. Munkhbaatar, one of Map Road’s main challenges is investment. He explains that his company currently relies primarily on projects financed by the state, which limits the scope of work it can take on. With the help of foreign investment, the company could branch out into concession tenders, or projects where companies execute a project with their own finances.

“Our company’s mission is to ‘Create together and develop together,” says Mr. Munkhbaatar. “We seek U.S. partners to help us to become one of the main road contractors in Mongolia.”