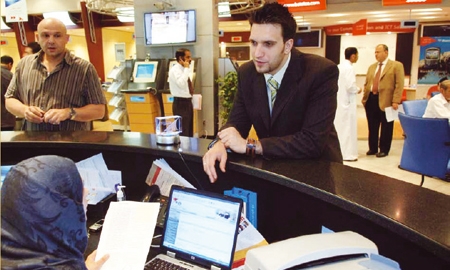 The ambitious and far-reaching national Vision 2030 will transform the country into a world-class competitive, sustainable, diversified and knowledge-driven economy – and to achieve this objective through the involvement and participation of all its citizens. One of the key pillars in this process is ensuring that all areas of government services are efficient in delivery and responsive to the needs of citizens.

The means chosen to bring about this transformation is eGovernment, using 21st-century technology to comprehensively re-engineer all aspects of how people in Bahrain, citizens or not, access government services. As the CEO of the eGovernment Authority (eGA), Mohammed Ali Al Qaed, states succinctly: “Our slogan of ‘Towards a Better Life’ goes in line with the country’s economic vision,” delivering services electronically in an efficient, simple and swift manner.
Mr Al Qaed goes on to explain that people today prefer and expect a “one-door service” and that the eGA provides this through the eGovernment portal, as well as via its fast-developing Mobile Portal and other means available for people without their own internet access.

More than 300 government services are already provided through eGovernment and the aim is to extend its reach to cover all government entities. Bahrain’s success in implementing eGovernment rapidly and efficiently has been internationally recognised and Mr Al Qaed proudly states that the country is now placed by the UN “first regionally, in third position in Asia and seventh in the whole world for online service delivery.” It has also received special recognition for its programmes to constantly engage with users of government services, including through the use of social media.
However, the eGovernment initiative goes beyond simply making it easier for people to interact with government. As an integral and essential part of Vision 2030, the economic and social benefits of eGovernment extend to creating an ever-more efficient environment for businesses and entrepreneurs, as well as educating increasingly wider segments of the population, of all ages, in computer literacy and in the technologies of today.

The result will be a society open to innovation and the adoption of new and more efficient ways of doing things. Mr Al Qaed highlights that the UN has, in this respect, designated Bahrain as “a role model for other countries to follow” for “its excellent track record in terms of its leading initiatives in eGovernment and public service.”
The eGA’s own vision, within the national Vision 2030, is aptly named “Advance”, summed up as being to “achieve next-generation government by delivering high quality services effectively, valuing efficiency, advocating proactive customer engagement, nurturing entrepreneurship, collaborating with all stakeholders and encouraging innovation.” The programme is continually evolving with action plans already extending to 2016 and continuous monitoring through key performance indicators.

The breadth of the vision is impressive, both now and even more for its future growth, with continuous skills enhancement and the cascading of organisational change being seen as just two of its fundamental benefits. Future areas of application under consideration include the Internet of Things, Open Data, Cloud Computing and Green IT.
Mr Al Qaed emphasises once more that the over-riding goal of the ambitious and comprehensive eGovernment programme is to bring about a better life for everyone in Bahrain – and sustained prosperity for future generations, a well-founded vision advancing smoothly and steadily.