Putting water to energetic use 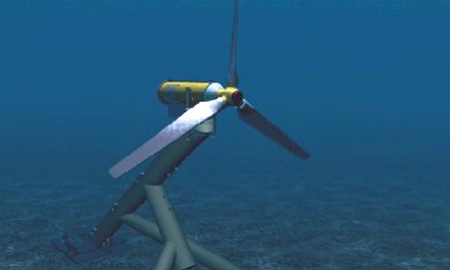 After signing an agreement with energy group MRS Holdings, Cameroon began studies on electricity production from ocean currents in December 2010.

Though the country is often referred to as “Africa in miniature” because of its geographic diversity, by far the most viable energy option is hydropower. According to the World Bank, Cameroon has 115 terawatt hours per year of hydroelectric potential, of which only 2.8 per cent is developed. This could change with global warming, which affects water flow. But for now, the Government’s policy is to maximise river currents while pursuing a more diverse energy mix.

The Sanaga River is the largest in Cameroon with a basin that occupies a quarter of the territory. From east to west, it cuts across six of the country’s 10 provinces. Along its 553-mile course, the average river flow is estimated at 2,072 cubic metres per second (m3/s). In the rainy season from August to November, it can easily reach 5,700 m3/s. In March however, average flow drops to 473 m3/s and leads to outages. Estimated losses from erratic electricity provision cost Cameroon 1-2 per cent of GDP growth each year.

The two hydroelectric dams currently operating in the Sanaga River produce 90 per cent of electricity for AES-SONEL, the public utility, which is equivalent to 721MW.

A raft of new dams is expected to double the river’s electricity output. The plan is to build reservoirs in the headwaters that can regulate flow during the dry season. In addition, small-scale hydroelectric stations will supply power to rural areas and industries, especially the aluminium sector.

“The main hydroelectric dams currently being built on the Sanaga River include Lom Pangar, Memve’ele and Mekin. At the hydroelectric station of Nachtigal (330MW), the studies seeking to extend the Edea aluminium factory are now complete. The dam will go online in 2015,” says Minister of Energy and Water Resources Michael Ngako Tomdio.

The $430 million (£267 million) Lom Pangar Hydropower Project (LPHP) is a regulating dam with a 30MW power station attached to it. Its role is to unlock the river’s estimated 6,000MW of hydropower potential by storing water during the rainy season and releasing it during dry spells. This will guarantee that the two hydroelectric stations further downstream can work at full capacity.

Together with the downstream development of Nachtigal, LPHP will improve power supply to the Southern Interconnected Network, as well as become a cheap source of energy for the extension of the Alucam smelter.

Economic justification for the project has already been vetted by the World Bank, which could contribute up to $100 million in technical assistance.