Egbin Power Station: committed to energy and the future

Article - December 18, 2012
The power plant offers people of the country a way out of the crisis 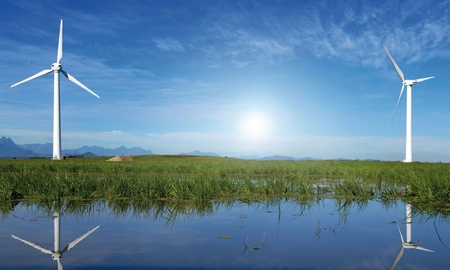 Nigeria, December 14 2011: The biggest and oldest power station of Nigeria, Egbin Power Station, is at a standstill, even though the country lacks 1,080 additional megawatts in electricity, a high official of the Holding Company of Nigeria (PHCN) points out. The hydro-components of the power station that produces electricity on the basis of water power have been failing because of an inadequate maintenance and the plant has therefore been switched off.

Nigeria, December 19 2011: Mike Uzoigwe, General Manager of Egbin Power Station in Ikorodu (Lagos State) states that the plant is working again at full capacity. Both succinct notifications describe five days of great stress for the general manager. He is responsible for about a quarter of the power that is generated in Nigeria at the Egbin Power Station. The standstill pointed out the importance of electricity generation for Lagos’ 10 million citizens. A relapse into the times where the national electricity provider known as the National Electric Power Authority (NEPA) was mocked by the people as “Never Expect Power Anytime” is unlikely nowadays.

“The power sector is vital,” says Mr Uzoigwe. “Once we get this right, everything else will fall into place.”

What he dubs “everything else” is an ambitious programme called Vision 20:2020, which foresees the consolidation of Nigeria as one of the 20 biggest economies in the world by 2020. This means a race for the country to move from its current position, 30th, (according to its GDP) into the top 20. Furthermore, a 50-year oil boom has not managed to free half of the Nigerian people from poverty. For the oil specialist Mr Uzoigwe, this path of development is partly a question of technology: “We need people that have the knowledge,” he says. “They have to be up-to-date with international energy issues and at the same time be able to adapt to the most diverse conditions.”

Until the arrival of the present government, Nigeria never had a sustainable strategy for its development. Whatever the energy sector developed, it failed when it came down to putting it into practice. For the energy sector this meant that the tenfold increase in power generation to about 40,000MW was only possible if the state – which at that point was almost the sole owner of the power production – opened up to private investors.

The liberalisation of the economy is moving forward slowly, though an attempt to reduce administrative structures has been made. In the case of Egbin an ambitious renovation programme has been undertaken, Mr Uzoigwe explains. “We have reached our limits and then all of a sudden everything started to move forward”.

There are still people that fear the privatisation, he adds, “because they don’t understand. We have to explain it to them.”

Once the energy supply has been stabilised, small businesses would be able to produce all kinds of products that at present are being imported and, instead, export them. “With stable electricity, we would encourage small-scale entrepreneurs to invest in different industries and sell them to the local market. We wouldn’t have to import as many products,” explains Egbin’s General Manager.

In regard to religiously motivated violence in a country with around 170 million inhabitants and more than 500 different languages, he says: “The pockets of unrest will eventually die down. There will be a shift of perception. People will realise the benefits of doing things the right way, and be keen to be one of the best. Those involved in minor uprisings will soon realise that there is life for them out there.”

Though risks always lurk everywhere, “we have a market here,” says Mr Uzoigwe. “What we need is financing, to get it going. Once it is liberalised, the investors will come as well. And then there will be no more barriers. The sky is the limit,” he concludes.