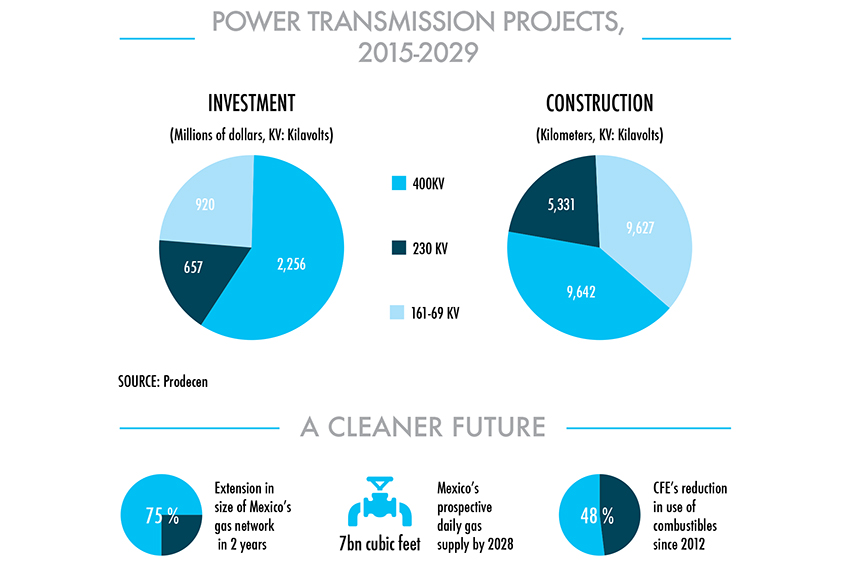 Since the 2011 energy crisis when demand for gas in Mexico began to far outpace supply, the country has marched forward with plans for the mass construction of gas pipelines that it says will increase the size of its network by 75% within two years and triple its gas supply to 7 billion cubic feet a day by 2028.

Both national and international firms are participating in the mass pipeline expansion, which will bring Texas gas to Mexican territory, including states never served before like Sonora and Sinaloa. Licenses are being issued by Mexico’s Comisión Federal de Electricidad (Federal Electricity Commission, CFE), which now has 85 investment projects underway, which in addition to new pipelines include combined-cycle stations, renewable energy stations and transmission and distribution lines.

CFE now has 26 pipeline projects in Mexico and the United States, most of which are currently under construction or already in operation. U.S. and Canadian firms such as IEnova, a subsidiary of San Diego-based Sempra Energy, and Calgary’s TransCanada have been awarded contracts for pipeline construction in Sonora and Mazatlán, among other sites, while state-owned Pemex is working on a stretch of pipeline from Texas to Guanajuato.

The final three pipeline construction contracts were awarded to Fermaca, which will build the La Laguna-Aguascalientes and Villa de Reyes-Aguascalientes-Guadalajara pipelines, and Transcanada for the Tula-Villa pipeline. Other contract winners in the bidding process included Energy Transfer Partners, MasTec Inc. and Carso Energy.

“The Energy Reform has unleashed a range of opportunities for both national and international companies that want to participate in generating electricity in Mexico, or in its sale to commercial and industrial users,” says CFE’s CEO Enrique Ochoa Reza.

“For the first time in the country’s history an electricity market has been created. The market has many rules, but only one fundamental principle: the cheapest electricity will be the first to be used. This means that generators have a strong incentive to reduce their costs and offer electricity at the best price. This incentive is also at the root of a deep transformation in the CFE to modernize our generation, transmission and distribution infrastructure to lower our costs, and as an extension, the cost of electricity in Mexico.”

The Energy Reform targets the substitution of combustibles and diesel for cheaper and more environmentally friendly energies, including natural gas and renewable energies like hydroelectric power in order to lower the cost of electricity for industry, business and homes, while also reducing CO2 emissions. Formerly, the CFE used more expensive electricity that hampered industrial competitiveness. Between 2012 and 2015, however, the agency reduced its use of combustibles for electricity generation by 48%, while lessening the CO2 emissions of its plants by 45%.

“How have we done this? By offering licenses that allow the private sector to own, construct, operate and maintain the 26 new gas pipelines,” he explains.

All CFE’s tender processes related to natural gas pipelines have been monitored and accompanied by Transparency International Chapter Mexico. Contracts are signed for 25 years, during which winning bidders construct and operate their pipelines. Once the first gas delivery is made, CFE begins payment on shipments for the remainder of the contract period.

“So in that sense, the risk if private, the execution of the project is private, and the ownership is private, but the benefit is public because we receive natural gas that allows us to reduce our use of combustibles, to generate electricity with natural gas, to lower the cost of that generation, and to reduce emissions,” adds Mr. Reza.

CFE TRANSFORMS
CFE has not been exempt from the intense change taking place in the energy sector. The commission’s CEO says that two Mexican entities missed out on the restructuring process the entire country underwent during the North American Free Trade Agreement (NAFTA) in the 90s. Pemex and CFE. The Energy Reform has provided a new opportunity for these two bodies to restructure and streamline in order to function in a competitive environment. In the case of CFE the regulator has been ordered to create at least four new generating subsidiaries, which will compete against each other as well as with private sector firms in the provision of electricity to the market. Though the new companies will still be state-owned, they will be expected to operate effectively and to carry out efficiency processes.

“The Energy Reform has unleashed a range of opportunities for companies that want to participate in generating electricity in Mexico, or in its sale to commercial and industrial users”

Mr. Reza says a new transmission company will also be created that will operate separately from generation and distribution arms. The new company will report to CFE in order to establish regulated transmission tariffs. A subsidiary will also be created for distribution, with 16 different business units, one for each Mexican state, in order to accurately monitor distribution costs in each region. Additional subsidiaries will be created for electricity sales in Mexico and abroad.
“These companies will all operate within the constitutional and legal framework of the Mexican state,” he says, “but will be mandated to operate as productive companies, with the responsibility of making their processes much more efficient than what we have seen in the past.”

CLEANER STILL
Increasing hydroelectric power is also a top CFE priority. The commission is expected to increase its generation of clean and renewable energy to 35% (as opposed to the current 26%) by 2024. “I personally consider hydroelectric power as our best means for fulfilling the government’s commitment to the environment,” says Mr. Reza.
CFE is overseeing the construction of a number of new hydroelectric dams, including a joint Mexican-Chinese consortium that is now working on the 240 MW Chicoasén II in Chiapas, and the CFE CEO expects to tender another before the end of his government’s term in 2018.