From backpackers to business travellers, more and more people are discovering the natural wonders of East Africa’s gem of a destination 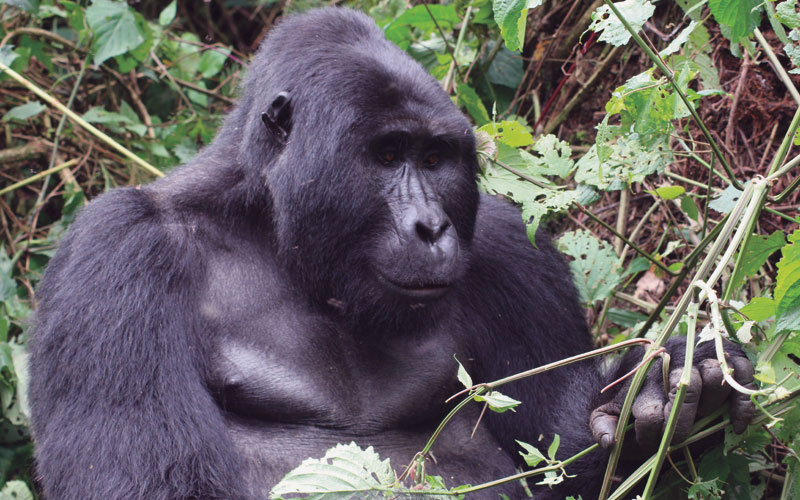 THE VARIED LANDSCAPE OF UGANDA IS HOME TO A FASCINATING MIX OF ANIMALS, INCLUDING 19 SPECIES OF PRIMATES, MORE THAN ANY OTHER EAST AFRICAN COUNTRY
SHARE

Coming nose-to-nose with a mountain gorilla, speeding down the rapids of the White Nile, chasing butterflies through the forests of the Mountains of the Moon, or basking under the sun along the shores of Lake Victoria. These are all activities available in Africa’s greatest comeback story, Uganda.

International travellers from the five-star-hotel set to young backpackers are once again sampling the delights of the country which Sir Winston Churchill reportedly called “The Pearl of Africa”.

Scholars and old Africa hands still debate whether the late prime minister actually ever uttered that phrase, but what is certain is that Uganda had long been a favourite holiday spot for Britons visiting East Africa and its fame soon spread around the world.

Political instability in the 1970s and 1980s caused a hiatus in most people’s travels to Uganda, but after democracy returned in the late 1980s, the tourists did too and now visitor numbers are registering impressive growth.

Indeed, over the past five years the number of travellers to Uganda has grown by more than 53 per cent, from  just under 1.1 million to almost 1.7 million in 2013, according to Uganda Tourism Board figures.

As a result, for the first time ever, tourism has now become Uganda’s top export earner. The central bank’s monetary policy statement in August showed that the tourism sector pulled in $1.4 billion in financial year 2013/14, up from $1.1 billion the previous year. The long-standing leader for exports receipts, workers’ remittances, dropped to second position (generating around $800 million during financial year 2013/14), with coffee in third place (earning about $415 million in the same period.)

At last count, 17 foreign carriers now serve Entebbe International Airport, with many operating direct flights to and from the tourism-generating markets of Europe and the Middle East, while passenger traffic through the airport is growing by 10 per cent each year.

And why do they come? For those mountain gorillas and other wildlife, of course, and then – for those whose hearts thrive off of adrenaline – there are the action holidays that are on par with adventure sports destinations like New Zealand or Canada.

How about bungee jumping high over the source of the Nile River, the longest such waterway in the world? Or trekking through the Bwindi Impenetrable Forest National park to drop in on a pygmy village?

And then there are those mountain gorillas. But they are not the only primates in Uganda, the varied landscape of which is home to 19 species of our closest relatives, more than any other East African country.

There are chimpanzees, baboons and a whole painter’s palette of others – blue monkeys, golden monkeys, red-tailed monkeys and red colobus monkeys, as well as the black and white colobus and the grey-cheeked mangabey, all residing in their natural habitats or national parks where guided tours are available.

Other wildlife include the Big Five safari favourites – lions, leopards, rhinos, buffalo and elephants, as well as hippopotami, giraffe and a whole range of antelope. Bird watchers from around the world rank Uganda as one of their top destinations.

Uganda, many visitors say, is “The Real Africa” not just for its natural attractions but also the warmth of its people whose history and culture are amongst the continent’s richest and most diverse.

In 2012, Lonely Planet ranked Uganda number one in a list of top 10 countries to visit, alongside a succinct summary of Uganda as “Africa condensed, with the best of everything the continent has to offer packed into the small, but stunning destination.”

Despite Uganda’s abundance of natural attributes, tourism here is not only about wildlife and nature. Africa’s wild country is turning out to be a key destination for various international conferences.

Back in 2007, Uganda was already marking its territory as an international conference hub by hosting the 19th Commonwealth Heads of Government Meeting (CHOGM).

Today, Uganda continues to be active in realising further opportunities to ensure it remains as one of Africa’s top destinations for prestigious international events.

One such event is the 39th Annual World Congress of the Africa Travel Association (ATA) this year, which Uganda will host from November 11-16. The event is an esteemed annual world congress of tourism enthusiasts, which draws attendees from all corners of the world.

This year it is expected to attract more than 800 delegates and will not only boost tourism numbers – as the delegates will most likely explore Uganda’s bountiful gems – but it will also present the country with an ideal platform to further establish itself as the primary choice in East Africa when it comes to international business convention locations.

The congress is a golden opportunity for hoteliers, transporters and entrepreneurs in Uganda to showcase what is on offer.

Indeed, multinationals involved in tourism and travel are taking note of Uganda’s attractions and the corresponding rise in visitors, and investing in tourism infrastructure like hotels.

The Ugandan government is eager to see this interest increase.

“My ministry is committed to enhancing strategic partnerships with key players at the global level and we need to create more awareness of our unique tourist product,” Ugandan Minister for Tourism, Wildlife and Antiquities Maria Mutagamba told a recent conference in London.

“When Churchill made his famous remark about Uganda being ‘The Pearl of Africa’, it was all green, all peaceful, all lovely, everything natural. That is still Uganda today,” she said.