Article - December 2, 2013
Since 1969, the Mexican 'Super Company' has been providing growers with farming inputs and solutions, as well as hands-on training in new techniques 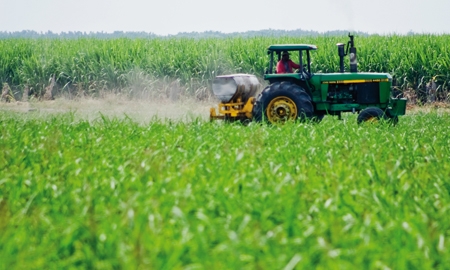 In Mexico’s diversified economy, agriculture still plays a vital role, providing employment for half of the rural workforce. The sector has seen its contribution to the economy slip in recent years, owing to a variety of factors including the entry of below-cost food imports, yet there is one company that is anything but slowing down.
Agroindustrias del Norte has enjoyed 12% growth rate in recent years, compared to just 3% in the market overall. Ever expanding, it generates employment whenever it opens new branches, and the firm’s main business line itself benefits farmers across Mexico by helping them increase crop yields and minimizing, or even eradicating, the use of toxic pesticides.
Essentially, Agroindustrias del Norte is a sub-distributor of farming solutions and operates a logistics network both at home and abroad.

Its five business units comprise a financing entity (Financiera Agrícola del Norte) that caters to corn growers; Innovación Agrícola, which offers farmers complete solutions for their fields, including fertilizers, seeds and irrigation equipment; Logicpro, the logistics arm that provides managed storage, packaging and distribution; a specialized foreign trade unit, Agrotrade, that manages buy-sell transactions with local wholesalers and end-users; and Bai Consultoría Agrícola, a consultancy that leads programs on sustainable agricultural production through a biotechnological system that lowers costs, raises yield and produces healthier and toxin-free crops.
Marco Esteban Ojeda Elias, General Director of Agroindustrias del Norte, is confident of the company’s prolonged growth. “By 2015, we’ll be selling double and it’ll all be thanks to bio-agriculture – that is the future,” he says, adding that the company has been focused on sustainable agriculture for the past nine years.
Indeed, the company is encouraging growers to employ new techniques and pesticides that protect plants in the most innocuous ways. Its website offers ample information on plagues that affect various crops, such as blackberries – one of Mexico’s top specialties – and the organic solutions that can be used to combat them, leaving the fruit healthy and the consumer safe.
Mexico, which specializes in intensive farming, boasts a geographical diversity that lends for a wide variety of fruit, vegetables and grains. According to Mr. Ojeda, the country mass produces 83 different crops. Certain areas, especially the north, employ high-tech farming and consequently Mexico’s agricultural products compete with the world’s best.
Agroindustrias del Norte was established in 1969 in Sinaloa and stands today as Mexico’s largest sales logistics network in the sector, with the highest number of technicians working in the field. In fact, according to the general director, the company sells directly to 91% of farmers in Mexico. Yet sales are not the sole focus, he underscores.
“We’re dedicated to training farmers, not just selling to them. We’re a company that is out in the field educating its people, apart from presenting them with new options and technologies,” he says.
“So our strength lies in our presence, influence and the trust we have built up with farmers for being there and providing tests, demonstrations and training.”
Mr. Ojeda goes on to list flexibility as one of the company’s best characteristics in helping farmers overcome difficult times.
“Part of our success is due to our flexibility and our reaction time in moments of crisis,” he explains. “In 2007, there was a terribly harmful virus and in 2009, Mexico suffered the worst freeze in 60 years. All the fields in the north froze and all the crops were lost. In 2010 there was a terrible drought and again, a lot of crops were destroyed. It was a bad five-year stretch.”
The farmer’s best friend, Agroindustrias del Norte has been recognized four times running as one of Mexico’s Best Companies by the joint Deloitte Mexico, Banamex and Tecnológico de Monterrey committee. It’s also been named a “Super Company – places where everyone wants to work” by the business magazine CNN Expansión five times and a “Socially Responsible Company” since 2005.
For Mr. Ojeda, the company has exuded confidence over its 44-year history. With just four board chairmen and four general directors over the years, Agroindustrias del Norte has operated successfully and professionally under strong corporate governance.
The company’s current general director – who comes from a strategic consultancy background and entered the world of agriculture in 2001 – has introduced changes that have served to further improve the balance sheet and raise confidence among investors. Since entering the company, he’s applied social corporate responsibility policies that were heretofore rare in the sector and got the company more involved in community educational programs such as Proeduca, a project to stimulate an entrepreneurial culture among young people from the poorer classes.
Mr. Ojeda is also the person responsible for enlisting Ernst & Young to audit the company’s accounts and for Agroindustrias del Norte getting involved in bio-agriculture.