Article - December 3, 2013
A land of opportunities 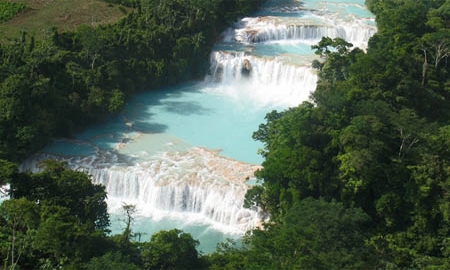 Mexico’s southernmost state, Chiapas is one of the country’s safest and wealthiest in natural resources. It produces petroleum and gas, and an important part of the country’s power production stems from four hydroelectric dams in the state.
State Governor Manuel Velasco Coello, who entered office one week after President Peña Nieto did, says there is an enormous opportunity for developing renewable energy. However, Chiapas is still a developing state that must not put the horse before the cart.
“We’re investing aggressively in infrastructure first, to build roads, hospitals, new universities and classrooms,” he says. “In 2013 alone, the municipal, state and federal governments are investing some 8 billion pesos [US$610 million].”
He adds that the tenders for the infrastructure projects are public and transparent and that the doors are wide open to anyone interested in investing in Chiapas. Until now, the state did little to attract foreign investment, but Mr. Velasco’s administration is launching a communication strategy to begin showcasing the myriad of opportunities available.
Potential investors need not worry about Chiapas’ relatively new entry into the world of investment; the World Bank’s Doing Business report identifies the state as one of the best in Mexico for investment thanks to the transparency and facilities already in place.
Chiapas ranks first in biodiversity nationwide, serving as the country’s main green lung, and it is the fourth most biodiverse place in the world. It is Chiapas’ conditions that make it ideal for growing crops such as coffee, rambutan, bananas, mangoes, and papayas, for example.
Moreover, it is the state’s natural backdrop that lends it such wealth, and the Governor is well aware of the potential that the state’s beauty – both natural and manmade – holds in the realm of tourism.
“Simply put, Chiapas is the state with the greatest natural wealth in all of Mexico,” he says.
“Yet we also have history; we have the ruins of Bonampak and Yaxchilán; the city of Palenque (which will soon have an international airport), one of the most beautiful cities in Mexico; the rich history of our indigenous peoples visible in places like San Juan Chamula and Zinacantán; and the Magical Villages of San Cristóbal de las Casas and Chiapa de Corso – very important colonial cities. We also have the Agua Azul Cascades and the Sumidero Canyon.”
In terms of geography, Chiapas is Mexico’s gateway to Central America, with which the state shares a 406-mile long border. On the coast, the Port of Chiapas serves as both a cruise ship terminal and a commercial hub.