Article - November 15, 2012
The first ship repair yard in Oman with the capacity to service and repair the largest crude oil or gas carriers in the world was officially opened in June 2012 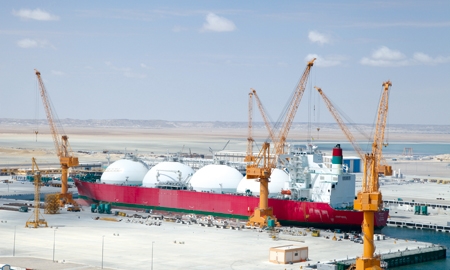 Oman Drydock Company (ODC) was established in 2006 by the Omani government which owns 100% interest in the project. That same year, Daewoo Shipbuilding & Marine Engineering (DSME) was awarded a contract to operate and manage the dry dock for 10 years, with a 10-year extension if neither party objects.

“It is a great asset to have one of the world’s leading shipbuilding companies operating and managing the shipyard for us,” said Khalil Al Salmi, deputy CEO at ODC.” One of the major benefits of our partnership with DSME is the transfer of technical expertise, know-how and technology.”

According to M. J. Park, the ODC’s CEO, “there are many reasons why Duqm was the best choice in terms of location for the ship repair business. The government of Oman has three key objectives: to diversify the economy, to create employment for young Omanis, and to develop the regional balance. Duqm was the perfect location to fulfil these goals and bring employment and prosperity to the central Al Wusta region.”
An additional key factor that makes Duqm unique among the other Middle East docks is that it lies outside the Strait of Hormuz, and is well placed on strategic trade routes in the Indian Ocean. “More than 30% of the world’s oil and gas, and over 60% of LNG comes from the GCC region,” said Al Salmi. “There are approximately 80,000 vessels in service worldwide and we want to capitalise on our competitive location and take a share of that market.”

Duqm dry dock is on its way to become a fully integrated ship repair services centre to rival competitors in the region, including Drydocks World Dubai and ASRY in Bahrain. With its world-class infrastructure (two graving docks and an upcoming floating dock) and state-of-the-art technology the ODC is planning to generate more than $200 million by 2020. Currently, the dry dock can accommodate up to 25 vessels simultaneously, and when at capacity, it will be able to service around 200 ships a year.

Initially, ODC plans to concentrate on general ship repair, but in the second phase the focus will be on special repair and conversions, while part of the long-term strategy is to get involved in offshore installations.

A major priority for ODC is the development of human resources. “It is the first time a dry dock business is established in Oman, so there are no experienced workers in the local labour market,” explained Park. “The number of jobs will be increasing continuously, year by year. Our plan for this year is to have 2,000 employees, and by the year 2020 we should employ approximately 4,000 people. This is a very labour-intensive business and we want to hire as many young Omanis as possible.”

The ODC’s market is widely scattered and their marketing campaign is targeting Europe, particularly Greece and Germany, as well as Asia, the Middle East and the US. An important advance for ODC was when it repaired its first American ship in March 2012. Park concluded – “it was a good start for us – our first American ship.”