The Star Project of Cameroon

Article - October 25, 2011
The Lom Pangar Hydropower Project (LPHP) is a priority project in the Government of Cameroon’s development strategy to improve access to reliable low-cost hydropower supply for growth and poverty reduction 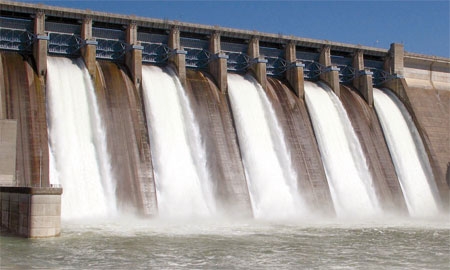 When a power plant becomes synonymous with a country, it is most likely a game changer. The Lom Pangar Hydropower Project (LPHP) is just that – a giant dam designed to harness the flow of the 553-mile Sanaga River, a body of water that weaves its way through Cameroon with 6,000MW of hydroelectric potential. When operative, it will feed the power-hungry southern half of the country.

“At Lom Pangar our goal is to build a dam with capacity for six billion cubic metres of water and a hydroelectric station at its base with power-lines to evacuate the energy. The dam will add 120MW of installed capacity per year and lead to new hydroelectric projects in the Sanaga River basin,” says Louis-Paul Motaze, Minister of Economy, Planning and Regional Development.

Located eight miles upstream from the Sanaga River, Lom Pangar will help boost hydropower capacity at Song Loulou (384MW) and Edea (264MW), which have underperformed due to extended droughts linked to global warming. About 30MW of energy will be used for rural electrification schemes in Eastern Region.

The cost of Lom Pangar is estimated at $430 million (£266.9 million), with the World Bank’s International Development Association (IDA) pledging $75-$100 million (£46.5-£62 million) in technical assistance. The IDA funds will also co-finance the power plant at the base of the dam, as well as an environmental and social management plan. However, World Bank support will depend on the correct implementation of the framework agreement.
The Government has hired the China International Water and Electric Corporation (CWE) to carry out the megaproject at a cost of CFA 75 billion (£100 million). Expected to go online in July 2014, CWE will deliver the dam within 38 months. Building materials and services will be provided by Cameroonian firms.

One of the main beneficiaries from the megaproject is Alucam, the aluminum smelter. The largest electricity consumer in Cameroon, Alucam has vowed to triple its output if LPHP provides it with enough power. A US-based mining company, Geovic, has also announced it will expand its treatment facilities in the southeast if it can source additional electricity. Planners are considering how to restructure electricity tariffs at AES-Sonel, the public utility, so that both residential and industrial consumers profit.

Cameroon already depends on hydropower for 95 per cent of its energy mix. But electricity shortages have put a drag on GDP growth since 2001, leading the Government to invest in a series of fuel and diesel-powered thermal stations that would take installed capacity beyond 933MW. Among low-voltage users alone, demand is growing at 6 per cent annually. With the extension of its Edea factory, industrial demand at Alucam could grow to 500MW in 2015, up from 150MW.

“In terms of hydropower, we have two other large-scale dams in our portfolio that will bolster the grid. They include the hydroelectric dam at Memve’ele on the River Ntem in the south. This dam alone will add another 201MW of electricity per year. Together with Lom Pangar, these two stations will improve our total electricity output by 30 per cent,” says Mr Motaze.

Some environmental details related to the construction phase of Lom Pangar are still being considered. They include the impact of flooding on old-growth rainforests. Cameroon has very diverse ecosystems, but the deforestation rate of 0.9 per cent each year is one of the highest in Africa. In response to conservationist concerns, a CFA 44 billion (£58.6 million) environmental plan was presented in June 2011 in Yaounde. The Government has vowed to create the 58,000-hectare Deng Deng National Park, which will include protection for mountain gorillas and other endangered species.

Meanwhile, the trajectory of the Chad-Cameroon oil pipeline is also at issue since a portion of about 12.5 miles will lie underwater when the reservoir reaches full capacity. The Cameroon Oil Transportation Company (COTCO) plans to reroute two stretches of the pipeline in order to bypass Lom Pangar, thus avoiding the risk of oil spillage along the route to the seaport at Kribi on the Atlantic Ocean.