Article - July 30, 2014
With ROC preparing to host the All-Africa Games next year, the Délégation Générale des Grands Travaux has been busy implementing large infrastructure projects and laying the foundations for the country’s future development, as opportunities also lay waiting for foreign investors in the transport, water and energy sectors 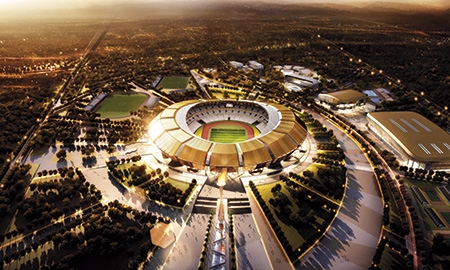 WHEN THE LIGHTS GO ON IN BRAZZAVILLE’S NEW 60,000-SEAT STADIUM IN JUST A FEW SHORT MONTHS, WITH VARIOUS CONSTRUCTION PHASES AND ITS FINAL DESIGN FEATURED ABOVE, THEY WILL DRAW UPON A NEWLY REVAMPED POWER GRID
SHARE

A succinct yet compelling affirmation, made by Denis Sassou Nguesso, President of the Republic of Congo, sums up his country’s determination to create a better society for future generations: “This is the future.” The President has made building new infrastructure the centerpiece of his government’s agenda, focusing on providing critical services to improve the quality of life for all of the country’s citizens. “Infrastructure is vital to society, the nation and development,” Mr. Sassou Nguesso adds emphatically. “The very survival of humanity depends on it.”

Since his most recent election, in 2002, the President has embarked on an ambitious project to transform his homeland, with the long-term goal of becoming a prosperous, emerging country by 2025. Some major milestones have been reached so far, with the completion of projects that have had a profound impact the country’s 4.6 million inhabitants. Next year’s All-Africa Games represent yet another point on this journey, a chance to celebrate what has been attained so far, and to look forward to the challenges that lie ahead.

A plan for growth and prosperity

Although Congo faces challenges common to many African countries, like a shortage of health services and underdeveloped energy, transportation and communication networks, its leaders have recognized these shortcomings and have undertaken aggressive measures to address them. Development experts are quick to point out its enormous potential, thanks to a relatively small population, a rich endowment of petroleum reserves, mineral resources, natural forests, and arable land, as well as a favorable climate for agriculture. Also in its favor, Congo possesses a highly developed hydrographic network and occupies a strategic geographical position in Central Africa, with a 105-mile long coastal front on the Atlantic Ocean and a deep-water port in Pointe-Noire.

In terms of the country’s development, all of these factors portend a highly promising future, one that has until now been severely hampered by a lack of some very basic services. Safe, clean water; a reliable source of electricity; paved roads and a modern communications network. While these basic amenities are taken for granted in much of the industrialized world, they represent a daily struggle for millions of Congolese. This helps to explain the sense of urgency with which the government has undertaken its many critical infrastructure projects, and illustrates the deep impact that they have on the lives of Congolese citizens.

The country’s transportation difficulties also loom large. Many of its roads remain unpaved and become all but impassible during the tropical rainy season. Its telecommunications sector, on the other hand, has attained an enviable penetration rate, with the number of mobile phone subscriptions surpassing the country’s total population.

Recognizing the need to address these necessities, Mr. Sassou Nguesso created a single government body for that sole purpose more than a decade ago, called the General Delegation for Major Projects. Head of this delegation since its inception, no one knows the country’s future hopes and challenges more intimately than Jean Jacques Bouya, Minister at the Presidency for Spatial Planning and the General Delegation for Major Projects, who proudly lists some of the country’s most significant attainments.

“Implementing a national infrastructure strategy for over a decade has given Congo nine airports, three of them international, more than 600 miles of paved roads, over 900 miles of high voltage electrical lines, an additional 350,000 cubic feet of drinking water and 600 miles of fiber-optic cable,” he says, adding, “An energy boulevard and a national interconnected network within the Central African Power Pool, increasing supply from 100MW in 2002 to 600MW today, ensures energy independence.”

Like the President, Mr. Bouya holds a deep belief in the need to provide critical public resources, not just in Congo, but in all of Africa. “Not solving Africa’s lack of infrastructure compromises the economic performance of an entire continent,” he says, “putting the social and economic development of more than a billion Africans at risk.” This commitment has helped Congo to become a leader in the region and an example for all of Africa.

Congo’s average public investment budget during the last decade surpasses the West African Economic and Monetary Union (WAEMU) average by more than 50%, according to the International Monetary Fund (IMF). Its public expenditure per capita ranks third in the Economic Community of Central African States (CEMAC) and is about four times larger than the WAEMU average. In 2013 and 2014, total investment in the country will surpass one-third of its GDP – a sizably larger share than the less than 20% devoted to this end in the United States and European Union.
Applying this type of energy on a larger scale, Mr. Bouya believes, would provide massive benefits. At Build Africa, the first ever international forum dedicated to infrastructure held in sub-Saharan Africa, which took place in Brazzaville in February of 2014, he urged his colleagues to follow this path. “If the continent could meet its infrastructure needs it would benefit immensely. Infrastructure projects could create 2 million direct jobs and 2.5 million indirect jobs per year,” he says.

The All Africa Games – a venue for progress

The 2015 All-Africa Games are a particularly fitting venue to exhibit the country’s advancement. Next year, one of Africa’s marquee sporting events celebrates 50 years of athletic excellence and friendly competition, in the very spot, Brazzaville, where the first games were inaugurated in 1965.

Today more than ever, Congo embodies this will to progress, which has motivated its extensive preparations for next year’s competition.

The amenities include an elegant new stadium that can seat 60,000 spectators, a modern sports complex, Olympic-sized swimming and training pools, restaurants, healthcare facilities, training fields and an Olympic village.
Within the context of Congo’s broader drive for building and investment, the All-Africa Games have proven to be an effective conduit for the revival of nationwide sports programs and facilities.

“We are here heading towards the future,” says Leon Alfred Opimbat, Minister of Sports and Physical Education. “It is an important moment that will enable us to give Congolese youth modern sports infrastructure.”

As part of this effort, the Sports Ministry has already equipped eight of the country’s 12 regions with sports facilities, and aims to complete the task as part of the preparations for the games next year.

The plan is to use these games to positively impact an entire generation of aspiring athletes. “This is an opportunity for us to lay the foundations for the development of sports in the long term by building modern sports facilities. And all this exactly to provide modern infrastructure, enabling African youth to compete in very good condition,” Mr. Opimbat emphasizes. “This is an important aspect: to provide young sportsmen and sportswomen, first Congolese and then African, high-quality infrastructure, modern infrastructure.”

Power and clean water for everyone

When the lights go on in Brazzaville’s new 60,000-seat stadium in just a few short months, they will draw upon a newly revamped power grid. Because of the essential role that electricity plays in the industrialization and modernization of the country, the Congolese power sector has benefitted from heavy investment in the past few years.
Illustrating this commitment, in just the past decade, Congo has seen its power generation capacity multiply more than sixfold in just the past few years, growing from 89MW to more than 600MW.

“Our objective is to bring electricity and water into the homes of the Congolese people and to make sure that electricity is no longer a scarce commodity or a luxury for Congolese citizens, because we cannot develop the country without our own energy,” affirms Henri Ossébi, Minister of Energy and Water. In terms of the country’s water needs, vigorous capacity building has boosted production in Brazzaville from 13,000 cubic feet per hour to 288,000 as of 2013.

In Pointe-Noire, the country’s second-largest city, construction is under way to nearly triple the flow of water to its estimated 300,000 inhabitants, while “Water for everyone,” a large-scale nationwide project initiated by the President, aims to drill 4,417 new wells in 1,173 localities. So far, more than 250 have been completed.

Water and power represent two of the most basic human needs, which the Congolese government has gone a long way toward meeting for its population. Expanding these services requires capacity building in other critical areas, notably transportation.

Congo’s Minister of Transport, Civil Aviation and Merchant Navy, Rodolphe Adada, stresses the importance of continued infrastructure investment, in line with the agenda laid out in the President’s “Future Path” plan.

To this end, Mr. Adada has headed up the modernization and expansion of Maya-Maya International Airport outside Brazzaville, with the goal of creating a regional hub for investors there, while other Congolese towns gradually build up their own infrastructure.

Aside from this flagship project, the Transport Ministry has continued to expand Congo’s network of roads as well as its ports and railways.

Blazing ahead with telecoms

Ten years ago, only about 12 out of every 100 Congolese had mobile phones, while traditional landlines were even scarcer, according to figures from the World Bank. Since that time, cellular technology has spread rapidly across the country, which now counts nearly 4.7 million total mobile subscriptions – more than its total population.

The unprecedented level of interconnectivity has helped to create opportunities to diversify the economy and has made information accessible for virtually everyone.

While technology made this possible, good governance provided the context in which it flourished.

“Before, the State had almost absolute control over the sector and its regulation,” says Thierry Lezin Moungalla, Minister of Post and Telecommunications. “There was a series of reforms of the sector. So there is governance today which is consistent with what is practiced everywhere else, including the United States. It is totally open and deregulated today. The law abolished all monopolies. Today any private investor wishing to invest in telecommunications can do it.”

This strong regulatory framework gives the sector a solid foundation to evolve with the industry.

Operators in the country have achieved near-total territorial coverage and will soon expand 4G services.

The government, meanwhile, has launched a plan to build a network of fiber optics throughout the county, starting with its major cities.

“Based on this backbone, we are deploying all the infrastructure that will enable us first to cover the main towns in the country, and in a second stage there will be an extension of the fiber optics project to administrative centers of the departments, and then we will go as close as possible to people, including those deep in the countryside, as we try to connect all locations which can physically be connected to the optical fiber network,” Mr. Moungalla adds.

The overall goal is to make the sector accessible to entrepreneurs and potential business partners.

“Any potential investor, especially coming from the United States, should not only look at Congo and its 4.5 million inhabitants,” Mr. Moungalla continues.

“They must look at Congo and all the advantages. Establishing oneself in Congo as a base is also being able to settle in neighboring countries, while remaining in a country that is stable, that is secure, that is accessible to investment, that has a very welcoming investment code, and has the human assets that would ensure the development of a business.”