Article - March 8, 2013
A small building in the Rawda area of Kuwait brings hope to parents of children with autism. At the Kuwait Center for Autism, 100 children receive special care and assistance to develop their potential, and to help them to understand the world in which we live 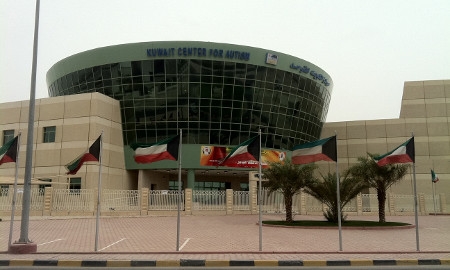 The Kuwait Center for Autism was established some 12 years ago, but the events which led to its founding began a decade earlier. The founder, Dr. Samira Al-Saad, had accompanied her husband on a posting to the USA from Kuwait. She brought her daughter Fatma with her, as she was autistic. During her time in the States, Fatima was fortunate to gain a place in a leading school for children with autism, the highly regarded Higashi School in Boston, which was run by Japanese professionals.
Dr. Samira is a lady with boundless energy and enthusiasm who had decided to use her time in the USA to undertake further study.
She did not hesitate and threw herself into this new challenge. By 1995, a building in Rawda had been converted into premises for a special school, the Kuwait Center for Autistic Children. Starting with 10 trainee teachers and five pupils, the school now has 50 and 100 pupils.
Work with autistic children demands a special type of person with a true vocation, patience, understanding and stamina. Dr. Samira set about training her new recruits and changing their perception and understanding of children with special needs.
She sought out staff with commitment who could cope with the work involved. She also continued to train teachers for the school in Saudi Arabia.
Today the center is more than just a school. A bi-monthly newsletter-style magazine in Arabic, it  details stories about pupils, conferences, workshops and links with autism organizations internationally.
Named Silent Scream, the magazine is a voice for those whose cries cannot be heard or understood. For parents there are articles written by experts on how they can help their autistic children or how they can help their other children to cope with having a sibling with these difficulties. The publication also gives details about programs and visits by international experts who come to Kuwait to run workshops for parents and teachers.
Dr. Samira is the founder of the Gulf Autism Union, established in 2002, which brings GCC autism professionals and institutions together. Autism awareness is growing and to assist in the process Dr. Samira regularly gives lectures at the Education College, so as to give trainee teachers an insight.
The school is now full but also operates a diagnostic service with special experts brought into Kuwait on a regular basis. Families come from all over the Gulf region and in some cases other countries to have their children evaluated and to seek advice.
A new phase has begun with the construction of a purpose built school with much greater capacity and facilities. Due for completion soon, the new school will be a first for the Gulf region. Vastly bigger than the current premises, the school will be able to expand its numbers and to provide state-of-the-art equipment for the students as well as a large swimming pool.
It will also have office space for a research team. Currently the center is working with Harvard University on a research project and has been sending DNA samples in this connection.
International Autism Congress  2014
With the prior experience of two International Conferences on Autism and Attention Deficit Disorders and one International Symposium, the Kuwait Center for Autism will be hosting the World Autism Organization’s International Autism Congress 2014 in Kuwait, for which it has received strong support from the Kuwaiti government.