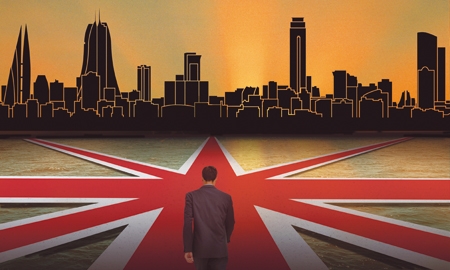 When Britain and Bahrain signed a first Treaty of Friendship in 1816, few could have predicted that political and economic ties between the two kingdoms would endure for two centuries. This year, the long relationship was marked on January 15 by the Great British Week. Staged in Bahrain, the seven-day event was a celebration of the rapport between two island nations intrinsically linked by their peoples and shared purpose.
Under the patronage of King Hamad bin Isa Al Khalifa, the festivities were hosted in conjunction with the third Bahrain International Airshow and received such dignitaries as Bahrain’s Crown Prince Salman bin Hamad bin Isa Al Khalifa. UK guests of honour included Prince Andrew, Secretary of State for Defence Philip Hammond, and a 250-strong delegation representing British business.
Prime Minister David Cameron entertained King Hamad at Downing Street last August and Crown Prince Salman also attended the World Islamic Economic Forum (WIEF), which was held in the UK capital last October in representation of Bahrain’s position as the natural financial hub in the Gulf region.
More recently, at the UK-Bahrain Islamic Finance Summit, held in London on April 8, Senior Foreign Office Minister Baroness Sayeeda Warsi and the Governor of the Central Bank of Bahrain, Rasheed Mohammed Al Maraj, signed a memorandum of understanding to further foster Islamic finance-driven trade and investment between the two countries. Baroness Warsi described Bahrain as an “innovator in Islamic finance,” a global industry that is expected to exceed $2 trillion by the end of 2014 (source: AlHuda Centre of Islamic Banking and Economics in Pakistan).
Little wonder then that London aims to place itself at the forefront of Islamic banking and has become the first non-Muslim country to issue Sukuk Islamic bonds. The announcement was made by the British Prime Minister at the WIEF, where he spoke of making London “one of the great capitals of Islamic finance.” Bahrain’s stake in the UK banking industry already runs to $11.1 billion in assets.

In the past decade alone, Bahrain and Britain have signed treaties covering the stock exchanges, investment and defence. Much of the onus for cross-border cooperation falls under the remit of the Bahrain British Business Forum (BBBF), which was set up in 1995. “Our role is to promote business between both countries. We meet regularly every month and we usually have a speaker, and our attendance is very high. Our membership has jumped from 300 to nearly 500. We believe we will reach 500 soon,” says the head of BBBF, Khalid R. Al Zayani.
“Since I became chairman, I have introduced more Bahrainis to the forum [and] we have introduced Bahraini members on the board – I used to be the only one. Now we have four, which is a great improvement. We need them on the board. We have a very close relationship with the embassy, and the chamber of commerce. We support any business that comes to this part of the world. We introduce them to Bahrainis and vice versa. We are there to promote better business relationships between the UK and Bahrain.”
But the ties that bind the two kingdoms run deeper than the economic-political sphere. Some 9,000 British expatriates call Bahrain home and the UK welcomes thousands of Bahraini students to its universities each year. Many Bahraini nationals consider London their second home and such is the mutual respect between the kingdoms that 240 British citizens were granted Bahraini nationality this year by King Hamad at their request in recognition of their loyalty and service to the country.
Speaking at the start of the Great British Week, Foreign Secretary William Hague described Britain’s relationship with Bahrain: “I particularly thank His Royal Highness the Crown Prince of Bahrain. You have our warm and sincere respect not only as a great friend of the United Kingdom, but also for your leadership in your own country.
“The relationship between the UK and Bahrain is historic; it goes back nearly 200 years to the East India Company in 1816. It is deep, since thousands of British nationals call this country their home. And it has a great future, with new areas of cooperation developing all the time, such as the affinity between London as a global financial capital and Bahrain as a major centre of Islamic finance.”
In February, the Lord Mayor of the City of London Fiona Woolf headed a large business delegation to the Gulf, starting in Bahrain before heading on to the UAE and Saudi Arabia. During the visit she said: “Our relationship with the Gulf is hugely important and this longstanding partnership is one that I hope to continue building. We view this relationship very much as one of sharing skills and experiences to grow both our financial sectors. Closer partnership will support the regional goals of economic diversification, growth and infrastructure development.”
King Hamad was an honoured guest at the Royal Windsor Horse Show last year, where a display of endurance riding was staged in the presence of Queen Elizabeth II. King Hamad spoke during the event of the ties between Bahrain and the UK, which he said were “as strong as ever.” Much like Bahrain’s long tradition in the equine long-haul discipline, that 1816 treaty was renewed and reinforced in 1971, the harbinger of a period of modern cooperation that has served to set Britain and Bahrain on the path of mutual understanding and prosperity.