Article - November 30, 2011
Tanzania is well positioned to benefit for an increase in world food demand 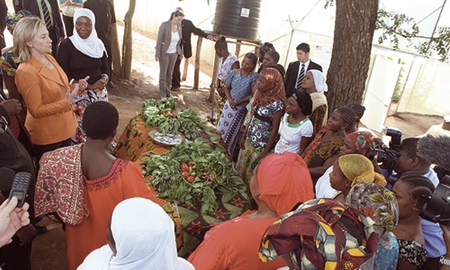 Agriculture provides the foundation for Tanzania’s economy, the second largest in East Africa. This sector alone provides more than 40 per cent of the country’s GDP, accounts for more than 85 per cent of its merchandise exports, and provides employment opportunities for roughly 80 per cent of the nation’s workforce. All of this is achieved despite the fact that only 25 per cent of the  44 million hectares of arable land is currently under cultivation.

With greater investment and improvements in technology, the agricultural sector could allow Tanzania to become self-sufficient with regard to food supply, as well as allowing the nation to export maize, millet, rice, wheat and pulses throughout the continent of Africa. Given the opportunity, the country could play a significant role in the fight against hunger. As President Jakaya Kiwete explained when speaking at World Food Day 2007 in Rome, a balance needs to be struck between food production and consumption, and every country, whether in poverty or overproducing, needs to play a role if world hunger is to be eradicated: “This year alone, total world cereal production was estimated to be 2,114 million tonnes, while total cereal demand was projected at around 1,007 million tonnes, less than half of the cereal production. Ideally, no one should starve or die of hunger in the world we live. Strangely and sadly enough, they do. This is not fair. This is not right.”

World food prices have fallen slightly from a historic peak in February this year – when the UN Food and Agriculture Organisation (FAO) global food price index reached 238 points – topping the previous record of 213.5 points in 2008. However Minister for Agriculture, Food Security and Cooperatives Jumanne Maghembe is hopeful that Tanzania’s role in future global food production will be a positive one, thanks to their growing agricultural sector: “We are at a turning point in terms of agriculture right now. Tanzania will be a very significant player in the international markets because global food and commodity prices will not go down in the next ten years; it is likely to be an upward trend.”

The Tanzanian government’s Kilimo Kwanza (Agriculture First) resolution adopted in August of 2009, encourages the private sector’s involvement and investment in agriculture.To this effect, the Southern Agriculture Growth Corridor of Tanzania (SAGCOT) was launched in January 2011. Between now and 2015 the policy aims to modernise and commercialise agriculture for peasant farmers, as well as small to medium-scale producers. “A large proportion of our population will work as contract farmers on large farms run by commercial farmers,” says Professor Maghembe. “However, we also envisage smaller farmers organised into agricultural associations with credit organisations, who will also participate as contract farmers.”

At present, agriculture in Tanzania is dominated by small-holder farmers, with women and young people making up the vast majority of the labour force. The biggest issue facing the agricultural sector is the fall in labour and land productivity due to the low application of technology, and the dependence on unreliable and irregular weather conditions. Cash crops such as coffee, tea, cotton, cashews and cloves, as well as livestock, are adversely affected by all-too-frequent droughts.

The country’s macroeconomic reforms have led to agriculture opening up to private investment in processing, input importation and distribution, and agricultural marketing. Most of Tanzania's production, processing and marketing functions have been assigned to the private sector, and the government is making further efforts towards privatisation, though there are still many areas where labour-intensive activities could be made more efficient and productive.

As well as improvements in agriculture the current Tanzanian government is also focusing on the growth of its industry, which currently accounts for almost a quarter of its GDP. Over the coming years, one of the goals set out by the Tanzanian government is to become a semi-industrialised nation – a goal that could be achieved more quickly than anticipated if growth in the economy continues. As Minister of Industry and Trade Cyril August Chami stated recently: “I am very optimistic about our plans – we are going to see a lot of improvements sooner rather than later.”

Bojan Djuric
100% of 1
bravo for Barbara from Belgrade.Nice job