Article - July 25, 2013
"Things have undoubtedly advanced and the relationship is in a different place now than it was three years ago," says UK Ambassador 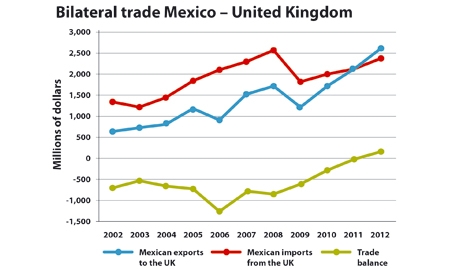 As far back as the 1820s, the key to British statesman George Canning’s American policy was fostering cordial and intimate relations with Mexico. In 1824, he wrote of Mexico’s “amicable connection” with Britain, which was the first European county to recognise Mexico’s independence.

The two countries have supported each other in times of war: in the Pacific War during World War II, Mexican and British troops fought alongside each other against the Japanese. In the Pastry War of 1838-9, the British supported Mexico in its fight against France, marking the true beginning of the relationship between the two countries.

Fast forward 175 years and Canning would be delighted to see that the amicable connection has held and become stronger than ever. The UK and Mexico share warm ties, through areas such as culture, tourism, trade, investment and education. “I think the relationship is in a very good stage,” affirms Judith Macgregor, British Ambassador to Mexico. “It has become more substantive and that’s true also for trade, investment and the economy; the UK has regained recently its position as the fifth largest investor in Mexico.”

“Currently the UK is Mexico’s fifth-largest trading partner in the EU and the third-largest European investor,” comments José Antonio Meade, Secretary of Foreign Affairs. “I am convinced that there are conditions in place to double trade, strengthen the creation of joint ventures and increase foreign investment. It is a task we have established in the bilateral relationship with the UK.”

Eduardo Medina, Mexico’s former Ambassador to the UK and now serving in the US, in fact calls the bilateral trade relationship “small and discrete”. He goes on to claim that it is “outrageous” that Mexico and the UK, both being such manufacturing-minded economies, have such limited bilateral trade.

Now more than ever, the two countries have a large appetite for one another’s culture, be it food, fashion or film. The popularity of Mexican food in the UK continues to grow at such a rate that Mexican food is one of the fastest growing sectors in the restaurant industry.

In Mexico there is a desire for British fashion.

“I think the high street as well as the luxury end of British fashion is being a really quite distinct new development of the last year,” says Ms Macgregor. Hackett, Pepe Jeans and Accessorize have all entered the Mexican market in the past year and a half and are expanding.

The growth of Mexico’s middle class offers huge opportunities for British companies looking to feed the growing demand for consumer goods, cars and services. Luxury vehicle manufacturers Jaguar and Land Rover are increasing their sales by some 100-200 per cent per month, according to the British Ambassador.

“Some of the big suppliers and major banks – HSBC, GKM Driveline, Unilever, to name a few – are all increasing their investment in Mexico quite considerably,” she says. “But we are also seeing that there are more companies coming in. In the first four months of 2013, I think we had as many companies as we had had in the whole of 2012.”

Moreover, British exports to Mexico grew 13 per cent last year and overall bilateral trade grew by some 33 per cent between 2009 and 2011.

It is the mark of a new focus on Mexico for British traders and investors, who wrongly focused too much of their attention on the other big Latin American player Brazil, according to Trade Minister and former HSBC boss Lord Green. Mexico is growing fast and economists predict it will overtake Britain as the sixth largest economy in the world by 2040.

“When investors from Great Britain and elsewhere visit Mexico and discover the size of this country, the sheer dimensions of our domestic market, the sophistication of our infrastructure and human capital, and the availability of technicians and engineers, the question they ask themselves is: Why didn’t we come here earlier?” says Mr Medina.

Although Mexico’s upstream oil industry has been completely closed off to foreign investors since it was nationalised in the 1930s, it in fact has allowed some private participation in the downstream sector. One of the most successful foreign firms operating in Mexico’s oil industry is UK company Petrofac, which won four of the major contracts that had been recently put up by Pemex, Mexico’s national oil company.

“They are also working on consultancy parts for Pemex; they are a company that has established itself and one which is particularly looking now to set up in Mexico one of its worldwide hubs for training skills in hydrocarbon exploration and production, and that is, I think, a really considerable success story,” says Ms Macgregor.

So 175 years on since Mexico received its first helping hand from Britain, and the two nations’ hands are joined tighter than ever. Ms Macgregor, whose tenure as ambassador soon comes to an end, is confident that she leaves to her successor “a really promising situation” and she is “sure that they will develop it hugely in the period ahead.”