Job creation and social inclusion at the top of government agenda

With the help of international partners such as the World Bank and the African Development Bank, the government is implementing strategies to boost the private sector, particularly SMEs, bring more people into the formal job market and tackle the main obstacles to job creation 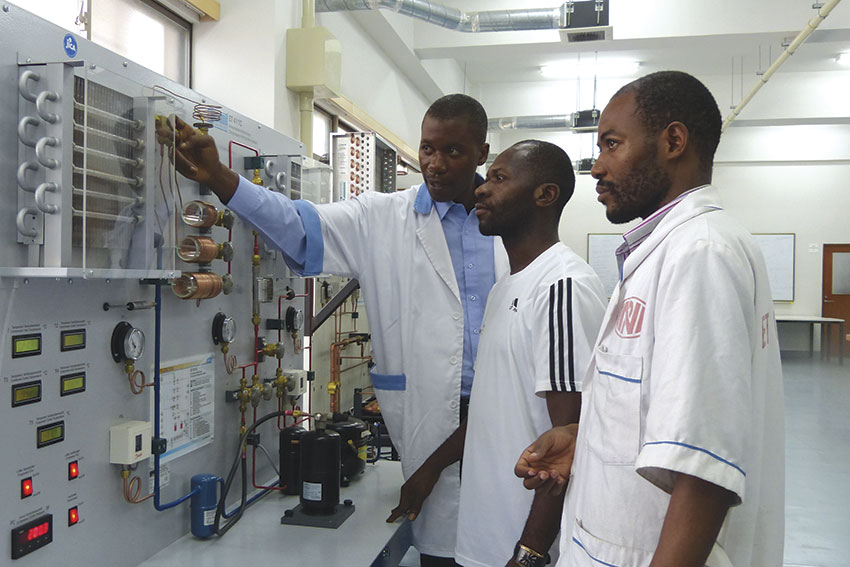 As the DRC continues on its path of development and modernisation, its leaders have placed increasing emphasis on ensuring that the wealth generated by the country’s resources gets reinvested in its population. With a poverty rate of 63.4 per cent in 2012, and less than 15 per cent of adults receiving salaries from the formal sector of the economy, the DRC has its work cut out for it. But to those involved in the struggle to improve the lives of Congolese citizens, addressing these shortfalls will have a tremendous upside on the country’s population and economy.

To help bring lasting prosperity to its 77 million citizens, the government has placed job creation and social inclusion at the top of its agenda. “The time has come for us to continue, without hesitation, economic and social transformation,” says Prime Minister Augustin Matata. “Men and women are at the heart of our economy and development. The DRC has garnered good results, but we must consolidate and intensify them; sustain the course of our reforms and accelerate inclusive growth.”

The Prime Minister has worked to build on the country’s traditional strengths in order to expand secondary and tertiary industries and services. Mining, for example, has attracted foreign investors from the US, South Africa, China and India, which in turn, has fuelled growth within supporting sectors such as banking, digital commerce, and mobile services. “Building a strategic vision for long-term development requires sound political leadership, tireless reform efforts aimed at reinforcing the quality of the administration and institutions, and adhering to the rules and practices of good governance regarding our natural resources,” Mr Matata adds.

Even early on, these efforts have brought about results. Poverty in the DRC dropped from an overwhelming 71 per cent in 2005 to 63 per cent in 2012; and unemployment has fallen 33 per cent. Similarly, despite jumping 11 places in the 2015 human development global ranking by the United Nations Development Programme (UNDP), the DRC still finishes near the bottom, 176th out of 188 countries. Presenting yet another challenge, per capita income (PCI) in the DRC is among the lowest in the world at $571 (£394) in 2015, although much improvement has been made since 2001 when PCI was $149.

“Job creation is the result of macroeconomic improvement. We cannot have growth without creating employment, which in turn creates income and wealth,” says Willy Makiashi, Deputy Prime Minister and Minister of Employment, Labour and Social Welfare. “The government is seeking to promote jobs for women and youth, through institutional capacity reinforcement and the improvement of social conditions for the workers.”

Yet while to some these challenges may seem insurmountable, officials in the DRC see the opportunity to make a lasting impact on people’s lives, and so the government has embarked on an ambitious strategy to boost the private sector, with a special focus on small and medium-sized enterprises (SMEs), in an effort to spread prosperity. “Job creation is the result of macroeconomic improvement; it is a reality, because we cannot have growth without creating jobs, which in turn creates income”  Willy Makiashi, Deputy Prime Minister and Minister of Employment, Labour and Social Welfare

From the beginning, diversifying the economy and developing human capital have both been a hallmark of Prime Minister Matata’s term of office. “While the country is very wealthy in natural endowments regarding mineral resources, it is imperative to diversify beyond this wealth alone, in order to propel the Democratic Republic of Congo to a state that can compete economically on a global scale,” he explains.

To date, the government has established a national social protection policy that seeks to secure a safety net to guarantee a better quality of life for all Congolese citizens, engaging with international partners, notably the World Bank and the International Labour Organisation, to form the country’s first ever roundtable to establish a national social protection policy.

The government has also implemented important measures to improve health and safety in the workplace, established dialogue mechanisms between government and the union of Congolese workers, recruited over 1,000 inspectors to enforce labour legislation and created 45,000 formal sector jobs. Also, through the National Social Security Institute, the government has increased social security benefits, and ensured prompt and regular payments.

The DRC also counts the African Development Bank (AfDB) among the backers of its job creation and social inclusion strategy. Together, AfDB and the DRC are addressing the needs of the education system, the lack of training and the lack of entrepreneurial know-how which constitute main obstacles to job creation. The government has shifted its policies on education, taking a more technical and practical approach. The creation of the National Institute for Professional Preparation, as well as government-backed job training centres are two examples of this new approach. The key, according to the projects backers, is to respond to the shifting needs of the job market through strong professional and technical education and training.

Congolese leaders see tremendous potential in developing the DRC’s agricultural sector. Already a vital industry throughout the nation, agriculture contributed 20.6 per cent to the country’s GDP in 2013, but Mr Matata is seeking to boost the sector even further. “The agricultural sector is where we can have the most significant impact on the population,” he explains.

Another huge area for development exists in the informal sector of the economy. In the DRC, 88 per cent of the job market is informal, where there is very little government oversight. Through its outreach programme, the government is hoping to grow the formal sector and thus include more workers in the social protection net. “SME’s represent 96 per cent of the country’s economic fabric, and most of them exist in the informal sector,” says Minister of National Economy Modeste Bahati Lukwebo, adding that incentives have been put in place, such as decreasing tax rates for SMEs, to entice more of them into the formal sector.