Japan looks to grow its presence across Africa

Between 2016 and 2018, Japan has pledged to invest $30 billion in Africa’s development, as it bids to join the likes of China and the US in the battle for influence on the continent. 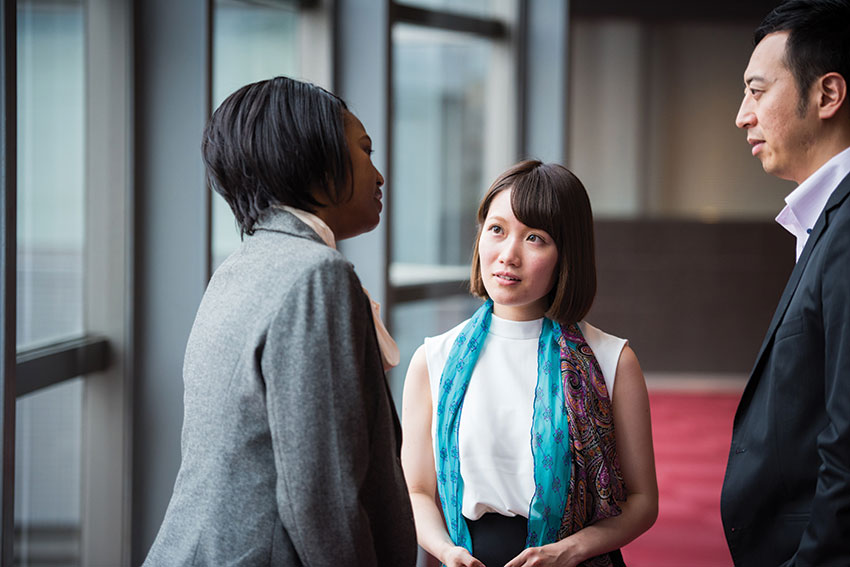 AN INCREASING NUMBER OF JAPANESE COMPANIES ARE VENTURING INTO AFRICA
SHARE

Competition in Africa is heating up, with Japan aiming to increase its presence and influence on the continent as it looks to make up ground lost to China since the turn of the century.

Japan launched the Tokyo International Conference on African Development (TICAD) back in 1993, and since then has invested around $50 billion in Africa, a meagre sum when compared to China and the US.

But that figure is set to increase by 60 percent in the space of just three years. At the sixth TICAD summit in the Kenyan capital of Nairobi last August, Japanese prime minister Shinzo Abe pledged to invest $30 billion in Africa’s development by 2018, with $10 billion being earmarked for infrastructure projects in education, energy, urban transport (roads and ports), health and agriculture. This was the first time the event took place in Africa, which is symbolic of Japan’s newfound interest in deeper engagement with African nations. “We need to move ahead with investing for the future of Africa. Africa and Japan will work together. Japan will launch various initiatives that will support Africa in different sectors including infrastructure” Shinzo Abe, Prime Minister of Japan

“We need to move ahead with investing for the future of Africa. Africa and Japan will work together. Japan will launch various initiatives that will support Africa in different sectors including infrastructure,” Mr. Abe said at the summit.

Aside from growing trade and investment ties, Africa and Japan share political alignment particularly in relation to UN Security Council reform. “Reform of the United Nations Security Council is truly a goal that Japan and Africa hold in common,” said Mr. Abe, who called on all African states to work with Japan to achieve it by 2023. He explicitly endorsed Africa’s ambition for a permanent presence on the Council.

Expanding electricity access is key to Africa’s development aspirations, and thus is a major pillar of Mr. Abe’s plan, which aims to increase Africa’s power generation capacity by 2,000 megawatts and bring electricity to 3 million homes by 2022, through investments in a range of hydro, solar, coal, gas and geothermal projects throughout the continent.

Some Japanese-backed power projects include hydropower plants in Uganda and Madagascar, the Takoradi II gas-fired plant in Ghana and a coal-fired power plant in Safi Morocco, which will produce 1,386 megawatts, or 25 percent of the country’s needs.

Koyo Corporation announced last year it plans to build a 1,000-megawatt gas-fired power plant in Tanzania and is also looking to invest in solar power plants in the country. In January, a Tokyo-based solar company signed a memorandum of understanding with Kitui County, Kenya to develop the first Japanese solar project in the country.

Meanwhile, general trader Marubeni will a build fossil-fuel plant in Nigeria's Lagos state. The plant, estimated to cost around $1.9 billion, will be Nigeria's largest when fully built, with a capacity equal to 15 percent of the national total. Construction will begin in 2018, with power production to start in 2021.

Japanese players in the geothermal sector are seeking to boost geothermal capacity in East Africa from 600,000 kilowatts to more than 1 million kilowatts, as part of the Power Africa programme, an initiative launched by former U.S. president Barack Obama in 2013. Japan joined Power Africa last year, following the signing of a partnership agreement between the Japanese Ministry of Foreign Affairs and the U.S. Agency for International Development (USAID). Other partners of Power Africa, which has leveraged nearly $43 billion in commitments from the public and private sectors, include the African Development Bank (AfDB), the World Bank, Sweden, Canada, Norway, the United Kingdom and the European Union. Japan aims to increase Africa’s power generation capacity by 2,000 megawatts and bring electricity to 3 million homes by 2022, through investments in a range of hydro, solar, coal, gas and geothermal projects throughout the continent

With almost no oil or gas resources of its own, energy security is a top priority for Japan, particularly after the closure of all of the country’s nuclear reactors following the 2011 Fukushima nuclear disaster. This is why Japan is making several big investments in oil and gas projects across Africa.

One of Japan’s largest trading companies, Mitsui Group holds a 20 percent stake in the Mozambique liquefied natural gas project (LNG) project that will eventually produce 50 million tons of LNG a year. Much of this production is expected to be exported to Japan. In Tanzania, the Japan International Cooperation Agency (JICA) and the AfDB are making a joint investment of $75 million in the country’s gas distribution network.

Japanese companies tapping oil and gas opportunities are supported by the Japan Oil, Gas and Metals National Corporation (JOGMEC), which provides financial and technical assistance, as well as offering up to 75 percent equity and taking on up to 75 percent of the liability in oil and gas projects during the development phase. JOGMEC provides financial backing of $5.2 billion yearly for oil and gas M&As. It now has a particular focus on Africa, where it is supporting Japanese companies investing in oil and gas projects in countries such as Mozambique, Tanzania, Kenya and Gabon.

The Japanese government and JOGMEC also aim to step up financial support to promote investment by Japanese companies in African mining, by accelerating bilateral meetings with each African country to bring more mining projects forward. This will help Japan to secure supplies of resources like coal, copper and rare earths needed to make electronic components.

“Japan aims to expand opportunities to bring about a mid-to-long term stable supply of mineral resources from Africa,” read a statement released by the Japan’s Ministry of Economy, Trade and Industry last year.

In February, Japan signed a cooperation agreement with mineral-rich South Africa, which allows the two nations to collaborate in a number of areas across the mining value chain.

“With the agreement, the two countries acknowledge that Japan, as an important consumer and investor, and South Africa, as a supplier of minerals and most importantly, a key participant in the mineral beneficiation value chain, have complementary interests in mining," said South Africa’s Minster of Mineral Resources Minis Mosebenzi Zwane.

"Our country cannot grow exclusively on the back of supplying raw minerals to other nations. It is in this context that we wish to invite Japanese companies to invest in South Africa’s downstream mineral development industries, effectively manufacturing and beneficiation as well as production of goods and supply of requisite services.”

Increasing Japan-Africa trade, which totalled almost $20.2 billion in 2015, is an important priority for Japan. This will require the expansion of shipping connections and investment in Africa’s port and logistics infrastructure.

The Japanese government is investing $255 million in the second development phase of Port of Nacala in northern Mozambique. The project will expand the capacity of the port to more than 250,000 twenty-foot-equivalent units (TEUs) and 5 million tons of cargo per year by 2020. Japan also financed the first phase of the project, which included the construction a new railway terminal, a project that was awarded to Japanese company Penta-Ocean Construction.

In Kenya, JICA has provided financing for a new container terminal at the Port of Mombasa. The $297-million facility can handle 550,000 TEUs and ramps up Mombasa’s existing annual cargo handling capacity to 1.6 million TEUs.

In February, a trade mission made up of eight major Japanese companies travelled to Namibia in southwest Africa, where they are interested in investing in the Wallis Bay International Logistics Hub project.

Aware of the need to develop strong human resources, Japan is supporting Africa in the field of education and training, mainly through the African Business Education Initiative for Youth (ABE), which, based on the Japanese principle of kaizen (continuous learning), will provide education and training to African foremen, plant managers, worksite leaders and 30,000 student engineers, while 1,500 business executives will receive training in Japan.

This programme offers opportunities for young and eligible African men and women to study at Master's courses in Japanese universities as international students and to experience internships at Japanese enterprises in order to develop effective skills and knowledge in various fields for contributing to the development of industries in Africa.

One country currently benefitting from the ABE initiative is Rwanda. Several Rwandan ICT experts have gone on scholarships to Japan, in order to acquire hands-on skills in information and communication technology as part of efforts to strengthen economic ties between the private sectors in the two countries.

Japan and Rwanda are fostering particularly strong ties in ICT. Last year, the Rwandan capital, Kigali signed an agreement with the Japanese city of Kobe to recruit over 1,000 ICT engineers from Rwanda. Under the deal, the two cities also agreed to collaboration and will exchange innovations in industries and research findings from their academic institutions. Kobe city also funded the establishment of k-Lab, an ICT incubation hub in Kigali, where a number of young Rwandan tech entrepreneurs have successfully managed to develop and sell ICT products.

Health is another important factor of the Japan-Africa plan, and part of the $30 billion pledged by Prime Minster Abe will be used to develop robust health systems, through investment in hospitals, clinics and the training of healthcare professionals.

The Japan Centre for International Exchange (JICE) seeks to leverage on Amref Health Africa’s six decades of experience in Kenya to gain insights into the Kenyan health sector.

“The corporate sector has unique resources that can be applied to addressing health challenges, resources that are different from those of the governmental and non-profit sectors. Japanese companies have increasingly been applying those resources while recognizing that investing in health is also a good investment in their bottom line,” said JCIE.

STT will use the money to invest in medical infrastructure, health care programs and solutions for enhanced management of healthcare institutions and resources. Over the next five years, CSV Africa will share in SST’s formative vision to enhance the quality, cost and accessibility of health services in contribution to Kenya's development.