Article - June 19, 2012
A £3.47-billion master plan for a huge mixed-use development next to the Grand Mosque will result in an area beyond compare 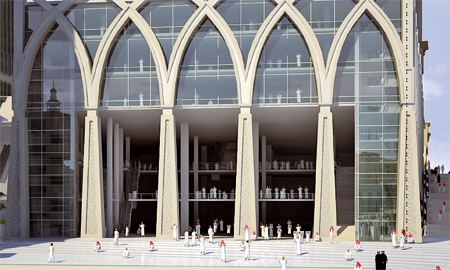 Following the outstanding success achieved by Makkah Construction and Development Company (MCDC) in developing one of the key neighbourhoods surrounding the Grand Mosque in Makkah Al-Mukarramah, the southern district has turned from a neighbourhood constructed chaotically and unguided by urban planning to a string of iconic residential towers and hotels hosting myriad facilities and services.

In the wake of this resounding success, the project owners pondered developing other shanty districts located southeast of the Grand Mosque, known as Jabal Omar. The neighbourhood hosts unplanned and disorganised habitations consisting mainly of old houses, some of which are ramshackle while others fall short of the most basic requirements of wholesome housing, not to mention the lack of public amenities and services.

This project, the second largest construction project in the city of Makkah Al-Mukarramah right after the Grand Mosque, came about as the culmination of a two-decade strenuous effort and hard labour that started back in 1989. During this period of time several business, technical, financial and administrative studies were conducted. Numerous architectural and real estate development contests were held with the contribution of prominent consultancy firms and major international houses of expertise in line with the set of procedures, methodology and standards laid down by the High Commission for the Development of Makkah Province. Indeed, all Jabal Omar plot owners with no exception contributed to the establishment of the company and the number of subscribers in the company’s shares exceeded five million shareholders.

Sheikh Abdulrahman Abdulqader Fakeeh, Chairman of the Board of Directors of Jabal Omar Development Company, said that  the finalisation of the project design, whose initial idea and conception emerged from Makkah, involved a roster of actions as required by a project the size of Jabal Omar. As a matter of fact, an expanded meeting was convened with the participation of qualified architectural engineering offices and the representatives of Saudi universities in order to closely study the various components and aspects of the engineering contest and programme of development, as well as the requirements of the Jabal Omar Development Company (JODC). The meeting was attended by representatives of Holy Makkah Municipality, the Ministry of Transport, and the Custodian of the Two Holy Mosques Institute for Hajj Research. Contestants submitted scale models, after which the advisory panel met in Jeddah with representatives of consultancy firms and universities to discuss and write up a report on submitted designs ahead of the jury’s meetings. Shortly after deliberating on the submissions, the jury came up with a decision proclaiming the winning design. The decision said that “the design model submitted by the first team of King Abdul Aziz University in Jeddah is the winner, as it has been able to fulfil most of the requirements of the contest in a much better way than other contestants.”

Animated by a common desire of both the High Commission for the Development of Makkah Province and the project management to improve linkage between the Jabal Omar project and the backyard districts through the establishment of three main roads slated to create organic linkage between Jabal Omar and the districts once they are properly developed in the future, and building pedestrian footpaths that would connect these districts with the Grand Mosque courtyards, a competition was held for the development of the project’s master plan. The winner was the French architectural firm Ateliers Lion Architectes Urbanistes for this third project development phase.

The total outlay on just the project’s technical studies, consultancy and engineering, as well as implementation design, neared 830 million Saudi riyals (£144 million). The cost reflects the efforts invested by the company to work out ideal solutions and make use of top-notch scientific tools and applications. The final cost of the project will expectedly be in excess of 20 billion Saudi riyals (£3.47 billion).

The JODC has completed infrastructural works for the major road networks in the project site area. It will also bear the cost of implementing the proposed tunnel as an alternative to Ibrahim Al-Khalil Street and to a section of Ring Road I in coordination with Holy Makkah Municipality. In fact, the project’s master plan provides for an orientation of all buildings and walkways towards the Kaaba as the centre of spiritual bonding and inner security. The project management has also allocated a large site for the establishment of a main prayer area and other air-conditioned and furnished prayer areas in the residential buildings. All utilities and services, such as lavatories and ablution fountains, will be available in these prayer areas, which can accommodate approximately 150,000 worshippers.

Likewise, the project design includes an integrated system made up of five pedestrian radial roads stretching from the west to the east and two main roads from the north to the south. No vehicles will be allowed on the walkways.

As an integral part of the project, a footpath has been designed as an extension of King Abdul Aziz Road with an accommodation capacity of 200,000 people per hour at peak times when congestion is at its highest. The JODC has transformed this road from a tunnel for pedestrians into a 40-metre-wide open road in addition to five-metre waysides to ensure public safety, which will offer pedestrians a panoramic sight of the Grand Mosque and allow them to perform prayer along the footpath as an extra prayer space linked to the courtyards of the Grand Mosque, being thus able to accommodate the growing numbers of worshippers. The project’s master plan caters to the needs of the elderly people and persons with special needs by providing elevators, escalators and tracks for their special use.

At present, two major contracting companies in Saudi Arabia, namely Binladin Group and Saudi Oger Ltd, are jointly executing the project. Construction works in the northern site of the project has been awarded to Saudi Oger, while construction works in the southern part has been attributed to Binladen Group. The groundbreaking ceremony of the project took place on January 10, 2008, coinciding with the first day of the Hijri year 1429, under the supervision of a group of experienced international consultancy firms with recognised expertise in construction and urban development. The firms have been contracted to work for the first time ever in Saudi Arabia in keeping with the gigantic scope and far-reaching importance of the project and the area of competence of each firm.

Upon completion – God willing – the Jabal Omar mega-project will include some 37 towers in varying heights with elevation being gradually proportionate to the distance from the Grand Mosque outward. Some of the towers will be dedicated for residential use while others will accommodate hotels. Two intertwined towers stand up tall at the starting-point of King Abdul Aziz pedestrian crossing, which leads to the Grand Mosque courtyards. The two towers will be the project’s iconic landmarks and a gate for the central area on the western side of the Grand Mosque. Furthermore, the project includes a hotel and a conference room directly overlooking the Grand Mosque, with a main hall capable of accommodating around 3,000 people, not to mention other conference and presentation halls.

Additionally, the project includes an integrated collection of modern malls to be situated along Ibrahim Al-Khalil Street, overlooking the Grand Mosque, together with a string of shops on both sides of King Abdul Aziz Road leading up to the grand market at the foot of a major hotel tower, including a wide range of activities, in addition to restaurants, coffee shops and hypermarkets, as well as dedicated spaces for family entertainment.

Since the conception and actual inception of the project, the JODC has been keen to ensure that it is implemented in such a way as to properly reflect the genuine character of the place and the extensive services it needs. That is precisely why the project owners have strived hard to adhere to the highest standards of quality and excellence in both planning and design, taking into consideration the full range of environmental requisites and eco-friendly engineering standards. It was only natural that the project was awarded the Leadership in Energy and Environmental Design (LEED) certification by the US Green Building Council (USGBC).

Recently, the JODC has started building concrete tunnels for the infrastructure (service tunnels) under the main and secondary motorways across the entire project site. The tunnels will be utilised to undertake all utility extensions, such as water and sewage pipelines, electricity, telephone and water cooling pipelines, all of which will be laid down within the tunnels to facilitate maintenance and any future extensions without the need to conduct any excavation in the future. This approach falls within the company’s plan to deploy modern technology used in building residential compounds, as no excavation works would ever be undertaken on any of the roads related to the project once complete. Rather, it will suffice to simply use the tunnels for any additional extensions that run through the site roads. The closeout phase of the project, which involves equipment testing and operation, will, expectedly, be finalised by the end of 2011.

People of Makkah know that living in it is unlike any other place in the world. These development projects are meant to position Makkah at the forefront of cities that are modern, advanced and well planned without losing its unique spiritual and human characteristics.

Makkah is like no other city in the world and will always be that way. For the developers it is essential to maintain that spiritual connectivity between its historical phases and special locations with today’s fast-paced developments and living needs.
As envisioned by the leaders of Saudi Arabia, Makkah is fast becoming a transformed city that is providing a high standard of living for its residents and exceptional level of services to its visitors. After passing through the Makkah Gateway community, continuing down King Abdul Aziz Road and arriving at Jabal Omar Project, hajjis and Umrah visitors will enter Al-Haram to fulfil a spiritual calling.