Eager to embrace the world, the regions of Campania and Apulia have focused their efforts on rapidly developing tourism and the private sector to exploit the massive economic growth potential 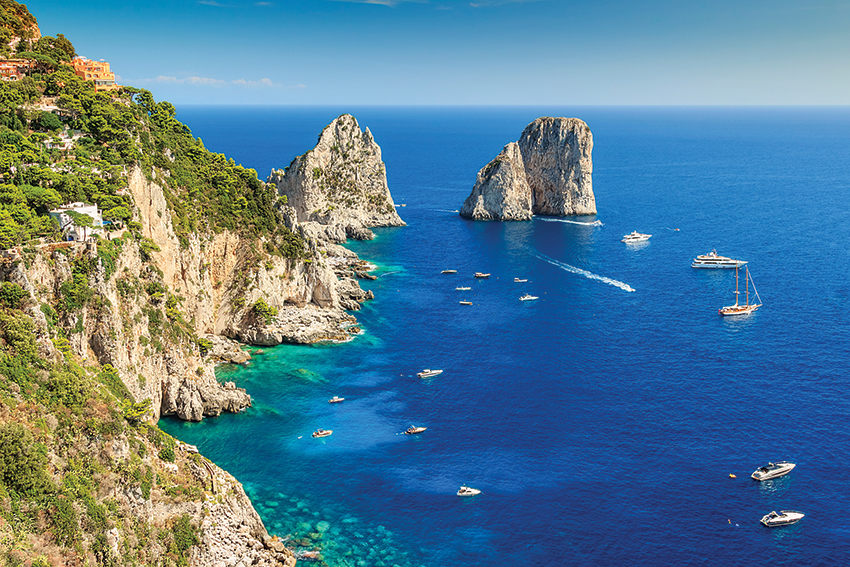 Key to progress being made in the regions of Campania and Apulia (in Italian, Puglia) has been the increase of both the number of international tourists coming to Italy, and multinationals companies focusing their attention in these areas.

Both regions are home to some of the highest concentration of natural and artistic beauty in the world, like the stunning Amalfi coastline, and World Heritage-listed Trulli-traditional conical-roofed limestone dwellings that can be found in the village of Alberobello as well as scattered around the Itria Valley. Italy’s southern regions are transitioning into a period of dynamic modernization to pave the way for a more prosperous economic future.

With 48.6 million tourists (2014) including part of the 11.9 million American tourists visiting Europe a year, Italy is the fifth most visited country in in the world. Tourism is one of Italy’s fastest growing and most profitable industries with estimated revenue of approximately $214 billion. People generally visit Italy for its rich art, cuisine, history, fashion and culture. It also boasts some of the most beautiful coastline and beaches in Europe. Italy also contains more World Heritage Sites than any other country on the planet.

So what role can the regions of Campania and Apulia play in the effort to turn their regions into an even larger tourism mecca and logistics platform that connects the Mediterranean to the rest of the world?

During his inauguration speech, President of the Campania region, Vincenzo De Luca stated, “Our region must become the most important touristic district of Italy, Europe and the world. We can make this happen.”

Campania is a region in Southwestern Italy known for its concentration of beauty, ancient ruins and dramatic coastline. Just the territory between Rome and Naples (the regional capital) is arguably one of the greatest concentrations of artistic and cultural heritage in the world. It boasts many spectacular tourist destinations like the Amalfi Coast, Pompeii, the islands of Capri and Ischia, and bustling Naples. “Where else in the world do you find such a concentration of beauty and diversity on offer?” asks Mr. De Luca. But he is not just focused on tourism as a means of revitalizing his region’s economy; his administration has set up a one-stop-shop for companies by collecting the required authorizations in order to facilitate investments. Italy is undergoing a modernization process that is happening in a frame of economic balance. For instance, they have approved a law that cuts all the unnecessary bureaucratic procedures that were keeping them in decisional paralysis. The decree stipulates a regional authority cannot take longer than three months to deliberate on decisions it is called upon.

Campania is also a center of excellence for the aerospace industry, which is a production and research center specializing in micro-satellite technology used for NASA. Additionally, the military and defense company Finmeccanica is a world leader in the production of missile systems and helicopters among other things. Furthermore, Chrysler has a production plant that includes experimentation and testing also involving American Products.

Thirdly, the strongest industry where their superiority is unparalleled is the agri-food industry. Despite being more expensive than their competitors from China, Turkey and North Africa the demand from their biggest markets, the U.S. and Canada is increasing Mr. De Luca claims. “The quality of Italian enogastronomy–and Campania’s in particular–is unparalleled beyond any doubt and we are working to increase our share in the medium-high segment of the market,” he says.

By synergizing the unique attributes of the Campania region with policies to support international investment, it is transitioning into the future. The Salerno Maritime Terminal designed by the late Zaha Hadid is a symbol of this and is a balancing point between the great Italian heritage and the country’s need for modernization.

And while Campania is embarking on a transformation path to bolster economic prosperity, Apulia, also located in the South but on the eastern side of the Italian peninsula is striving for the same result. Apulia, like Campania, has an important tourism sector, and has become a gateway to Eastern Europe through its interesting infrastructure mix and location as a hub for international organizations.

Known as the ‘heel of the Italian boot’, Apulia spreads 800 km along the length of the sea. The region is rich in visible excavations from the pre-Roman civilizations and castles that line the coastline. Areas like the Gargano and Salento, and sites like Polignano a Mare, Ostuni and the Tremiti Islands are testaments to the unique offering that Apulia provides. The National Geographic has recently ranked Apulia as the most beautiful region in the world also thanks to UNESCO World Heritage Sites such as Del Monte Castle and Trulli of Alberobello. Although the tourism sector is also of great importance to the region’s development, Apulia’s role as a logistics platform that connects the Mediterranean to Northern Europe in particular, is becoming increasingly prominent. The Port of Bari (the regional capital) acts as an important as a trade center with the Balkan nations.

Furthermore, infrastructure developments like Taranto harbor, is arguably one of the European Union’s most strategic harbors in the East due to its proximity to the Suez Canal. The harbor is equipped for all types of trade, and is set to be a free zone of exports. Nearby Taranto Airport – where Boeing builds its cockpits – also has the largest runway tracks of Southern Italy opening it up for large scale trading in what the President of the Apulia region, Michele Emiliano believes is strategic for trade. “Taranto airport is connected to the railway lines to take cargo and passengers to the heart of Europe,” he says.

“Our region must become the most important touristic district of Italy, Europe and the world. We can make this happen”

As a result of the region’s logistical importance, the United Nations’ World Food Program headquarters, and the United Nations’ Logistics Division are placed near by Brindisi airport. NATO has even redirected their focus here in what the governor suggests is a redirection of the coalition’s focus on Southern Europe in general. “Italians have significant abilities when it comes to peacekeeping missions and this international context can represent a major development opportunity for the region,” says Mr. Emiliano.

Italy’s Southern regions are capitalizing on new reforms and infrastructural developments to lift their country out of economic stagnation. The Southern regions Campania and Apulia are no longer just tourist hot spots, but centers of innovation and excellence with world-class organizations taking advantage of the highly skilled human capital and strategic logistical importance of these two regions.