Article - July 30, 2014
For decades, the primary sector that has dominated the Congolese economy has been the oil industry, which still represents 64% of GDP. Production and manufacturing, however, has traditionally contributed to 7% of GDP. These figures reflect a misleadingly low valuation of the country’s economic potential. As such, the government, along with the support of several bilateral and multilateral partners, has become firmly committed to diversifying the economy, using industrialization as one of the main drivers of growth 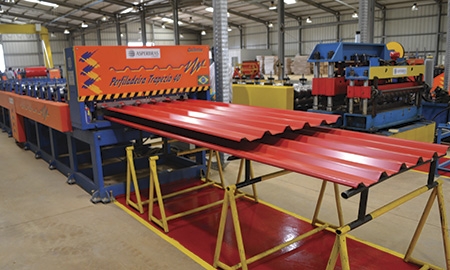 A NEW COMMERCIAL AND INDUSTRIAL COMPLEX 80KM NORTH OF BRAZZAVILLE AT MALAOUKOU IS EXPECTED TO GENERATE SOME 10,000 JOBS
SHARE

Under the Path to the Future project initiated by H.E. President Denis Sassou Nguesso, development has become a top priority in Congo. His vision of development is clearly delineated in the Strategy for Growth, Employment, and Poverty Reduction document (abbreviated to DSCERP in French), which outlines the country’s plans for diversifying its economy. As indicated in the report, the main challenge will be to transition the Congolese economy from the primary to the secondary sector, and to diversify the economy in such a way that maintained growth and inclusive sustainable development are guaranteed.

This ambitious revival of the local economy is based on a strategy that will use the promotion of foreign and domestic private investment to create conditions that will foster the development of a competitive and sustainable industrial base. Integral to its success is the development of quality infrastructure that will efficiently transform Congo’s natural resources into manufactured products. As this process takes shape, the Congolese government is particularly encouraging the creation of “building block” “industries, or industries that will generate synergy with parallel industries that may then lead to the creation of industrial zones throughout the country. With this proactive policy, Congo intends to reduce the trade imbalance in terms of food imports, which currently amounts to some 150 billion CFA ($310 million) per year.

Among the key projects in this move toward a more industrialized, economically diverse Congo is the construction of a sprawling commercial and industrial complex in Malaoukou, an area roughly 80km north of Brazzaville. With ground already broken and construction being spearheaded by the Brazilian company Asperbras, the 106-hectare industrial space will be home to 15 new factories where more than 20 different industries will produce various kinds of construction materials, including electric cables, PVC tubes and pipes, paint, and metals. As a result of the construction of this complex, as well as the construction of other facilities for the production of building materials, it is estimated that Congo will reduce its reliance on construction imports by 50%, while also stimulating the local economy with thousands of new jobs. Directly and indirectly, the Malaoukou industrial complex alone is expected to generate some 10,000 jobs.

In parallel with its push towards industrialization, the government plans to develop and resuscitate other industries, starting with agriculture. The republic boasts of nearly 8.2 million hectares of arable land. With only an estimated 2% of that land currently in use, Congo’s potential for developing its agriculture industry could significantly improve quality of life and access to nutritional resources for the local population.

According to Isidore Mvouba, Congo’s Minister of State for Industrial Development and the Promotion of the Private Sector, “It is necessary to stimulate the Congolese agribusiness, since an increasingly developed agribusiness will allow the people of Congo to eat more locally.” Mr. Mvouba goes on to explain that the country’s resources favorably predispose it to developing agribusiness, a move that makes particular sense for the local economy, given the current rate at which the country is dependent on food imports.

As yet another example of the benefits of industrialization, he cites the cement trade: “Congo currently produces roughly 370,000 tons of cement per year, but consumes more than 1,000,000 tons. Following the construction of several planned new cement production facilities, Congo will soon be able to increase its cement producing capacity by 300,000 tons,” he explains. By 2016, Congo is expected to be churning out nearly 3 million tons of cement per year – a surplus that will allow it to comfortably export to neighboring countries.

Mr. Mvouba reiterates that in Congo, forestry, the agricultural industry, transport and telecommunications, as well as the sustained growth of public investment in infrastructure, will all serve as the country’s main engines of growth.

“The Ministry of Industry has created the Agency for Investment Promotion, whose mission is to assist any investor who wishes to settle in Congo, and also the High Council of Public-Private Dialogue, which is a framework for discussion and interaction between investors and governments. Also, our investment charter offers investors a favorable tax regime,” says Mr. Mvouba. “Moreover, the government has initiated reforms that will significantly contribute to a healthier business environment and improve the ranking of Congo as a place to do business. These reforms include the simplification of procedures to create a business; reduced tax burdens; easing cross-border trade and the facilitation of access to electricity, without forgetting the stronger legal framework and the protection of investors.”