Switching to a cleaner power source 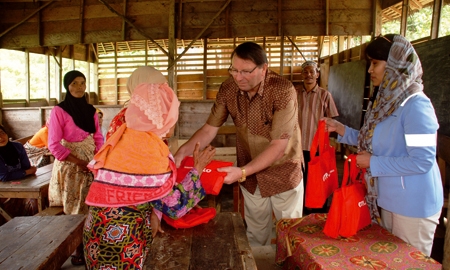 OTP Geothermal Power, a joint venture between Tata Power and Australia’s Origin Energy is developing the concession for the project at Sorik Marapi. Indonesia’s Supraco has a minor holding in the consortium, which has been carrying out a detailed exploration program since last year.

Construction is due to begin later this year and the first unit is expected to come into operation towards the end of 2015. Two more units will follow early in 2016.

Mumbai-based Tata Power aims to achieve at least 25% of its generation portfolio through renewable sources of energy by 2017.

“It is not influenced by international oil, gas or coal prices, and has both economic and environmental advantages. It is better for the country to use geothermal energy, which cannot be exported, rather than other fuel sources that will bring export earnings.”

He says that up until now there has simply not been the reward and recognition for those interested in taking the geothermal exploration and exploitation development risks. “In the past, there have not been enough government incentives and regulatory support for the private sector to feel comfortable spending millions of dollars on the exploration and development.”

According to Mr. Wheble, Tata Power and Origin have the combined strength to become a world leader in geothermal energy. And they have not entered the Indonesian market for a single project.

“It’s an enormous cost to support a team in Indonesia for just one project,” he says. “The returns these days aren’t great compared to the sheer risk involved with geothermal exploration, and so you need more projects.”

The consortium will identify 1,000MW and try to secure the projects it believes to be beneficial to Indonesia and to shareholders, he adds.

Bret Mattes, President Director of Tata Indonesia, says the recently established Alliance of Low Carbon Businesses in Indonesia (Albi) wants to see legislation to force the energy sector alone to reduce carbon emissions by about 300 million tons. “Imagine if all that coal was being sold outside the country, rather than being consumed locally where it is subsidized and taxpayers are paying for it,” he says.

“According to Albi, we could deliver about 170 million tons of carbon emission reductions without any additional costs, just by allowing geothermal and hydroelectric to compete with coal on an even playing field.”

Almost half of Indonesia’s geothermal potential is located where the demand for energy is at its greatest, on Java and Bali, Indonesia’s most populous islands.

Bali’s only geothermal power plant project is managed by Bali Energy, which first became involved in trying to generate geothermal energy on the holiday resort island as far back as 1994.

The project, which has confirmed reserves in excess of 175MW, was re-launched in 2004 after being suspended in 1997 by the government during the regional financial crisis, but is still waiting to go into commercial operation.

Bali Energy has three production size test wells, a joint operation contract with Indonesia’s national oil company, Pertamina, an energy sales contract with PLN, a government guarantee letter from the Ministry of Finance and an environmental and social impact study signed by theGovernor of Bali.

Ira Francis Hatta, the company’s President Director, says: “Bali has always had a shortage of energy mainly because of its dependency on tourism related businesses. It was a no-brainer for Pertamina and PLN to recognize the need for indigenous power. Last year PLN subsidized energy to the island of Bali in excess of $130 million!”

He also says Bali Energy has first-class partners and has been having discussions with two equipment suppliers, Toshiba and General Electric (GE). Using GE binary technology could enable Bali Energy to produce 10MW from its current wells.

“It will have a tremendous impact,” says Mr. Hatta. “I think it will probably be their first binary system implementation outside of Italy. We are small and committed, and GE is big and committed. The key word is committed.”