Celebrating women as agents of change 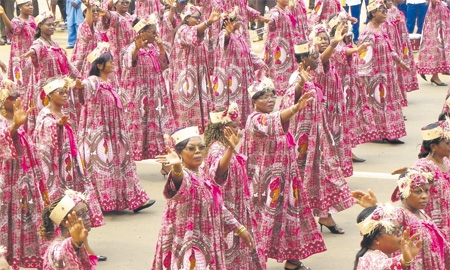 ON MARCH 8, CAMEROON TOOK PART IN THE INTERNATIONAL CELEBRATION OF WOMEN’S ACHIEVEMENTS
SHARE

Under the theme of “Equal access to education, training and science and technology: pathway to decent work for women”, the 100th anniversary of the UN’s International Women’s Day was celebrated around the world on March 8 this year. In Cameroon, women from all walks of life gathered in Yaounde as bearers of various affirmations on development, peace, political and gender equality, employment, education access and human rights as they passed along the capital city’s 20th May Boulevard. In a statement commemorating the event, the US Am-bassador in Cameroon Robert P Jackson applauded the nation’s Government “for recognising the importance of women to Cameroon’s economic and social development. Not every country has a government ministry dedicated to protecting and promoting women and families.”

In his statement, the Ambassador also called on local communities to support women entrepreneurs, commenting: “It is a fact that small and medium-sized enterprises (SMEs) drive economic growth and create jobs. This is true in my country and it is true around the world. And, women-owned enterprises often have a better growth rate and a better loan payback rate…there is no doubt in my mind that Cameroon’s greatest resource is its people, especially its women.”

Attending the celebrations was Marie-Therese Abena Ondoa, Minister of Women’s Empowerment and the Family, whose department is tasked with the formulation and implementation of measures relating to the respect of the rights of Cameroonian women in society. It also tackles the eradication of all forms of gender discrimination, the guarantee of equality in social, political and economic domains and the protection of the family and family values.

Furthermore, Cameroon celebrated Commonwealth Day on March 14 in unison with the global Commonwealth community by commemorating “women as agents of change”. The lively event at the Yaounde Conference Centre was presided over by Joseph Dion Ngute, Minister Delegate in the Ministry of External Relations, who said the Ministry would work towards ensuring more women are appointed in positions of responsibility and that women’s participation in major decision-making forums would also be increased.

One of the highlights of the occasion was the reciting of the Queen’s Commonwealth Day message, in which she said: “While some people use this day to acknowledge the love, admiration and respect for women, others use it to remember the great social and political strides made both by and for women in the last hundred years. There is no right or wrong approach.”