A landmark achievement in international diplomatic relations was reached on Saturday, January 16, 2016, dubbed Implementation Day, with the completion of Iran’s nuclear agreement and the lifting of international sanctions opening up a new era of trade. 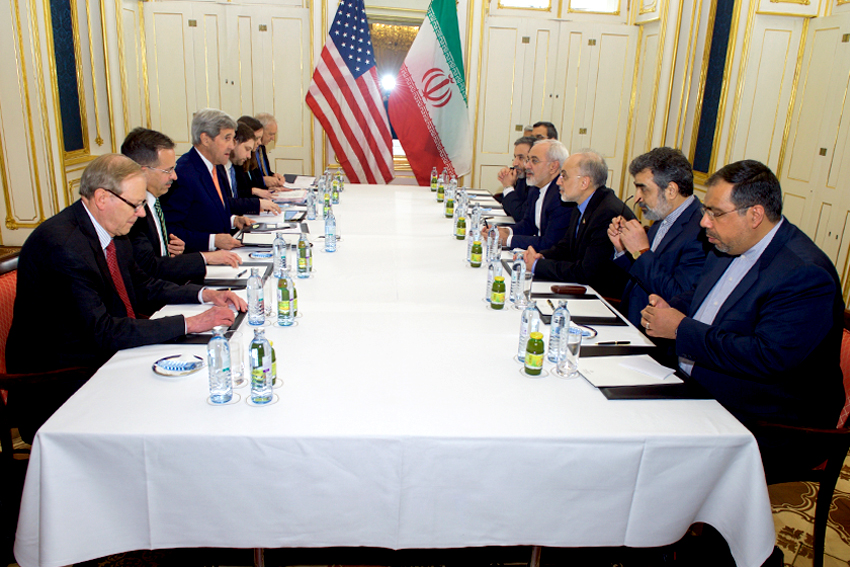 US SECRETARY OF STATE JOHN KERRY, IRANIAN FOREIGN MINISTER JAVAD ZARIF, AND THEIR RESPECTIVE ADVISERS SIT ACROSS FROM ONE ANOTHER ON JANUARY 16, 2015, AT THE PALAIS COBURG HOTEL IN VIENNA, AUSTRIA, BEFORE A MEETING ABOUT THE IMPLEMENTATION OF THE JCPO OUT
SHARE

The UN’s atomic watchdog, the International Atomic Energy Agency (IAEA), has announced that Iran has complied with the terms laid out in the historic Joint Comprehensive Plan of Action (JCPOA) to scale down its nuclear program. Under the deal agreed on July 14, 2015, with the US, Britain, China, France, Russia and Germany, Iran pledged to significantly reduce key areas of its nuclear activities in exchange for relief from crippling sanctions against it. Effectively, the JCPOA obliged Iran to reduce its stockpile of enriched uranium by about 98%, remove two-thirds of its centrifuges, leaving a total of 5,060 centrifuges, and dismantle the core of its heavy water reactor near the town of Arak.

Iran’s Foreign Minister, Mohammad Javad Zarif, met his counterparts from the six world powers in Vienna and said the progress made “proved that we can solve important problems through diplomacy, not threats and pressure, and thus today is definitely an important day.”

“Today marks the moment that the Iran nuclear agreement transitions from an ambitious set of promises on paper to measurable action in progress,” US Secretary of State John Kerry announced, adding: “Today [...] the United States, our friends and allies in the Middle East, and the entire world are safer because the threat of the nuclear weapon has been reduced.”

Mr Kerry said that Iran had “undertaken significant steps” that many people “doubted would ever come to pass”.

Addressing parliament the following day, Iran’s President Hassan Rouhani said only "extremists" were unhappy with the nuclear agreement, saying, “In [implementing] the deal, all are happy except Zionists, warmongers, sowers of discord among Islamic nations and extremists in the US. The rest are happy.”

The President also highlighted that the deal has “opened new windows for engagement with the world”.

Indeed, with the removal of international weaponry nuclear-related sanctions enables Iran to reconnect with the global economy after 10 years of being left out in the cold and unlocks billions of dollars worth of trade and new business opportunities, estimated to be worth as much as $100 billion.

The country’s oil exports look set to get a 500,000 barrels a day boost, and the surge in available oil on the market could further impact already low oil prices. According to the BBC, the sanctions have cost Iran more than more than $160 billion in oil revenues since 2012 alone.

Foreign companies will be able to resume business with Iran without fearing reprisals from the United States and Iranian exporters will be looking for new markets. International investors will be able to access the resource-rich country’s commodities exchange, the Iran Mercantile Exchange, and its banking system will gain access to Swift money transfer services, which will facilitate international transactions.

“Implementation day is a demonstration of how persistent, high-level engagement is a critical ingredient for successful policies between Iran and the international community,” commented Reza Marashi, of the National Iranian American Council, who commended the direct diplomacy between Mr Zarif and Mr Kerry, which he hailed as the “linchpin of this peaceful outcome.”