We asked Egyptian business and political leaders about their insight on the economy, hope for the future and their country’s changing perception abroad. The overall optimism is contagious 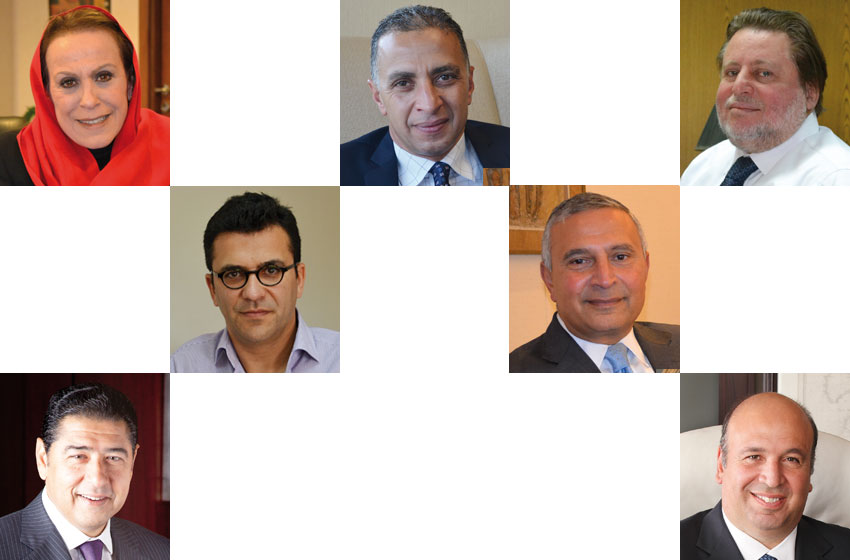 How do you see the current state of the Egyptian Economy?

Nevine Loutfy (ADIB): We are in the midst of an economic recovery. The confidence of the people returned based on the trust in the political and economical roadmap presented. The result of this can be seen with the growth of FDI. It began with private investors, both domestic and foreign, initiating many fact-finding missions. Of course, there are still challenges but we see growth in the stock exchange, banking sector, and an increase in revenues. We are expected to continue outperforming the market and increasing deposits.

Hisham Ezz Al-Arab (CIB):  There is a huge growth potential of the Egyptian economy. Given the fact that Egypt has witnessed a lot of political and economic developments over the past period, it is important to remember that nothing has fundamentally changed and like any emerging market, Egypt has it highs and lows and the diversity of our local economy managed to retain the country’s resilience over the past period. The underlining story is still a good one, especially with the government proactively addressing chronic economic and social issues, such as infrastructure, budget deficit, and so forth.  Accordingly, a more conducive environment for investment seems to be forming, simultaneously with the government’s ongoing efforts to revive international institutions and investors’ confidence and interest in the Egyptian economy.

Ahmed Heikal (Qalaa): We have had major economic and social improvements following a clear direction from the government. We trust the government’s policy roadmap and economic vision – it’s very clear they know the elements to a successful country. First, this is a private-sector-led economy. Adding to this, the government is going through a structural re-process. With the removal of energy subsidies and adjustments to the taxation system, they are tackling expenses and increasing revenues. The third step is the development of Egypt’s social safety net. The government is developing the ration card system and studying a system of conditional cash transfers to qualified beneficiaries at the same time as they raise pensions to a livable level. These programs, which will be funded by the new tax system, will reach over 15 million people and represent a major success for President Al-Sisi.
The issue of currency is also very present and the recent partial devaluation of the Egyptian pound increased the competitiveness of Egypt’s market. We trust that attracting investment is at the forefront of the government’s roadmap. The framework is there and all the efforts for implementation are being taken in order to overcome the obstacles that foreign investors currently face.

Hassan Abdalla (AAIB): Amidst the challenges the region is facing, we have the human capital, the market size, and the structure to succeed. The country is on the rise and I’m very optimistic about the future of Egypt. Currently, the GDP of Egypt is trailing at $272 billion, with a GDP growth rate of 6.8% as of Q3 2014.
The measures implemented so far, along with some recovery in confidence, are starting to produce a visible turnaround. Growth is projected to reach 3.8% in FY 2014/15 and to rise steadily to 5% over the medium term, which would create jobs and reduce unemployment. This being said, we are on the right track.

How optimistic are you about the future of Egypt?

Ahmed El Sewedy (El Sewedy Electric): The Revolution of January 2011 stopped everything for almost 18 months. There was no president, no Parliament, and no one driving the country. It was not a good time in Egypt for anyone; we did not feel it was our country anymore. No one could see a future. Then we had another revolution and President Al-Sisi was elected. The people love and trust him very much. He acts before he speaks, so people believe in him and the future of Egypt. We have seen a lot of improvements over the last nine months; I am very optimistic.

Ambassador Yasser Elnaggar: I’m incredibly optimistic. As an Egyptian citizen and government official, I see a number of indicators that are proof of the positive direction in which the country is headed. The political will and enthusiasm exists to implement the policies and direction outlined by the elected president and his government to revitalize the Egyptian economy after three years of no change. This sentiment is reflected by the public’s support.
I see a high sense of responsibility in the government leadership that is married with a determination to deliver on its promises. This government is committed and credible in what it does, what it is doing, and what it intends to do. I personally attest to this as I witness this determination from those around me. There are a number of decisions, policies, and laws that this government has already adopted to improve the economic situation – and a vibrant agenda of more positive changes ahead. The effort put forward by the government, its officials, the Prime Minister and President, into resolving problems, issues, and making the difficult decisions, is something Egypt has not witnessed in the past 15 years.

Tarek Elrefai (Barclays): The government has focused on infrastructure projects such as the national roads network and energy projects, which is a move towards boosting production across various sectors within the Egyptian market. If we take into account legislative reform such as the unified investment law and incentives offered by the government to encourage investors, I am confident and optimistic about Egypt’s current potential, particularly as we approach the Egypt Economic Development Conference.  Perhaps the biggest challenge that the Egyptian market may face is security, which I am hopeful can be controlled in the foreseeable future.

Mohamed Zaki El Sewedy (Chairman of the Federation of Egyptian Industries): There is a political will to improve things in Egypt, and where you have a political will, you can start, you can change, and you can build. Everyone is always talking about growth, but does growth affect everyone? Some sectors are doing really well, but real growth should be in education, health care and services to the people. We have many problems, but there are always problems. However, Egypt is moving in the right direction and our political leaders are willing to do the right thing. Of course, there are always alternative views and other situations that demand attention. We still have many issues to contend with such as traffic, urban crowding, education and terrorism. For every move to correct a flaw we see in the system there is a price or counter-movement against it. Yet we are willing to pay the price by establishing the correct reforms and correct initiatives.

How do you see the current perception of Egypt abroad?

Ahmed Badrawi (SODIC): I think Egypt is and always will be perceived as a market of enormous opportunity. It’s the biggest market in the Middle East and largely undersupplied on almost every front. The sheer size of the population and growth rate offers investment opportunities in every sector with lucrative returns on the medium and long term. While we have had a few challenging years, I believe that Egypt is now back on the investment map and the Egyptian government is taking serious steps towards creating a pro-investor economic climate, be it by economic and legislative reforms or putting forward different projects and ways of partnerships that would attract investors.

Tarek Abdel-Rahman (Palm Hills): From an economic point of view the perception has changed from a negative or neutral point of view to positive. We are seeing many foreign investors coming in from all around the world and participating in bids for important Egyptian companies. From a political standpoint we have been perceived as more stable. Isolated conflict in north of Sinai has affected perception but countrywide we have made great progress.

Mohamed Kamel (ERC): Sentiment is changing and improving. We are seeing a lot of excitement around Egypt. Perhaps most exciting for us is that every sign points to a rapidly growing economy on the back of strong fundamentals – and that this growth is broad-based. We’re seeing expansion at a rate north of 4% right now and will likely see 5.5% in the next fiscal year starting in July. Part of the key here is Egypt’s population, which creates not just a large labor force but opportunities to provide a large consumer market with fast-moving consumer goods, health care, and education offerings. As the purchasing power of the local population improves, people will spend more on consumer items alongside seeking better healthcare and improved education for their children. I would expect to see very strong investor demand for access to opportunities in these sectors.