In 15 years, Guayaquil has brought drinking water to 100% of the municipality

The city government, led by Mayor Jaime Nebot, has introduced significant improvements to water and sewerage services that will be complete by the end of 2015

The population’s quality of life is the priority for the new water and sewerage systems under development in the city during Jaime Nebot’s fourth consecutive term as Mayor of Guayaquil.

Emapag and Interagua are the two main companies responsible for water treatment and sewage in Guayaquil. Emapag, the municipal drinking water and sewage system company, is working on taking care of the city’s water and is receiving support and investments from the local government. For its part, Interagua is handling the operation and maintenance of the extensive infrastructure connecting drinking water, water sanitation, and storm sewer services, which together make up its task of providing, expanding the coverage, and improving the operation of basic drinking water and sanitation services in the city of Guayaquil. Both companies are precursors of the improvements that Guayaquil has benefited from in recent years.

Guayaquil’s waters’ past and present

In the 90s, the city’s water system left much to be desired when it came to water quality, pressure, and reliability. This situation led the municipality to form a project to modernize and privatize services, allowing the city to begin supplying drinking water and a city sewer system. According to José Luis Santos, Emapag’s CEO, the program aims to achieve full coverage of both drinking water and sewerage by the end of 2015.

“As the city grows, so does the challenge, and that is the great responsibility we have. I think we have taken a giant step, because 12 to 15 years ago, the city had neither this service, nor the coverage, nor the quality,” summarizes Oscar García Poveda, CEO of Interagua, who notes, “Today, Guayaquil is the Ecuadorian city which effectively ensures drinking water for 100% of the municipality.”

Not only has the amount of water reaching Guayaquil’s homes improved, but so has its quality. “We have a compliance rate of 99.68% in water quality, when 95% would already have been acceptable,” says Mr. Poveda.

Mr. Poveda adds that Interagua is conducting about 20,000 randomly distributed monthly tests across the length and breadth of the city. “We have a number of checkpoints, both from the point of raw water intake, and throughout the processes of treatment and distribution to homes,“ he explains.

Guayaquil has been criticized for being the most expensive city in Ecuador, as far as the price of water is concerned. In this sense, Emapag’s CEO clarified that the rate is measured in trimesters, depending on the consumer index, energy, and unified remuneration. Florsheim Ilfin spokesman Interagua points out that “the rate must allow them to be able to finance works, salaries, and other things.”

For its part, Interagua’s CEO argues that it is the only company in the country which has a special rate for those in extreme poverty. “There are very clear indices that determine which people these are, who pay only 10 cents per cubic meter. And I maintain that this applies only in Guayaquil,” emphasizes Mr. Poveda.

The cost of water is relative and, in fact, the price increases quite significantly in the case of users who do not have water service in their homes. According to Mr. Poveda, that is a really outrageous cost for the people, equivalent to around $5 per cubic meter. “Users have to buy water from a tanker or tank car, which brings them water sporadically and is delivered without any kind of sanitary control, and must be purchased at terribly high prices.” 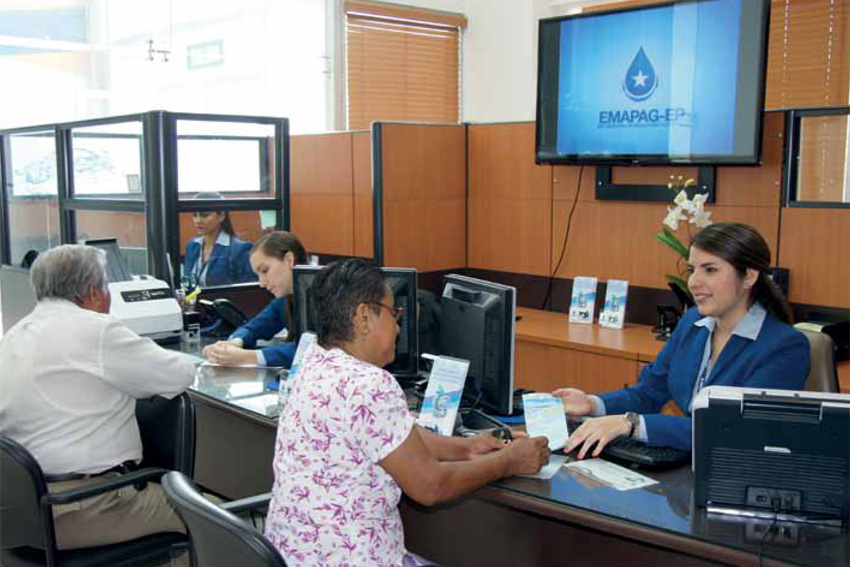 Emapag aims to achieve full water and sewerage coverage by 2015 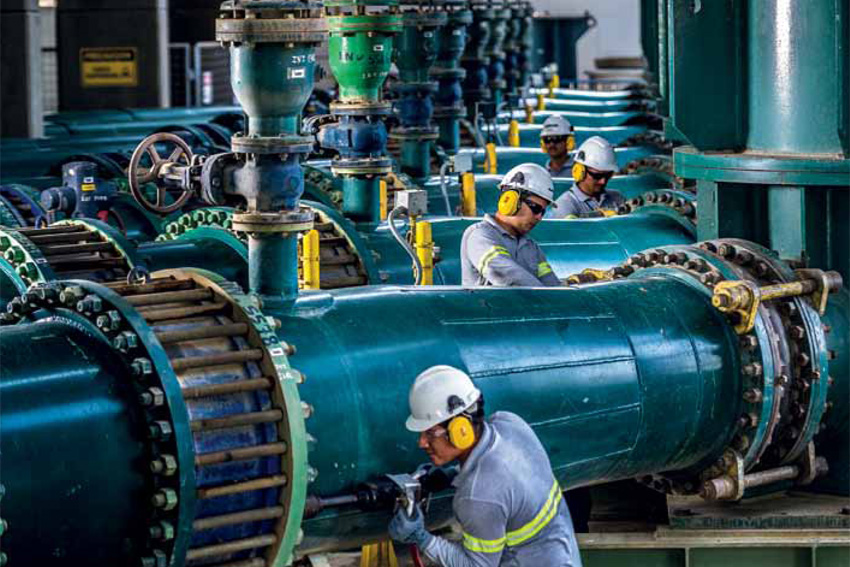 Educating and involving the people: the key to long-term success

Both Emapag and Interagua have established some clear social and community policies to educate citizens. Mr. Santos recognizes that their services are integral to the city’s development. The companies’ practices are socially inclusive, ecologically sustainable, promote responsible usage and consumer rights, and encourage social participation. For example, Interagua for its part has focused on children, since they represent the future of any country. “With the ‘We Are Water’ program, we teach schoolchildren how to repair a leaking faucet, and how to dismantle and or repair it. And what they learn, they do at home; it’s incredible,” explains Mr. Poveda.

Solid projects for a promising future

Expectations for the future of the city’s water and sewerage systems are highly positive. The Interinstitutional Committee for the Eradication of Poverty aims to achieve 95% drinking water and sanitation coverage in the country by 2017.

According to Ana María Larrea, Technical Secretary of Poverty Eradication, with the provision of these services, poverty based on unsatisfied basic needs (UBN) has been reduced from 33.7% to 18.7%, while extreme poverty according to UBN has gone down from 10.7% to 3.3%.

Since Interagua is advancing designs for two large treatment plants the city will have and most likely a third, Mr. Poveda states that the construction process is expected to have begun by 2016. “So then, Guayaquil is Ecuador’s pioneer city with regard to wastewater treatment and, quite possibly also South America’s. I know of very few cities with a vision as clear as Guayaquil’s,” he says.

All these projects, both short and long term, have a common goal: to improve quality of life in the city of Guayaquil. Interagua’s CEO believes that Guayaquil is a privileged city, because of its water coverage. “With regard to drinking water, this is a city in full growth,” he says. The water companies’ priority is to offer the people who come to Guayaquil the chance of a good quality of life through “its basic water and sewer services, at least when it is up to us,” Mr. Poveda concludes.