The privilege to contribute

Article - April 30, 2014
“I can make a contribution. It is a privilege and honour if one can apply one’s mind to try and make an investment decision,” says the Chairman of Dawood Hercules Corporation 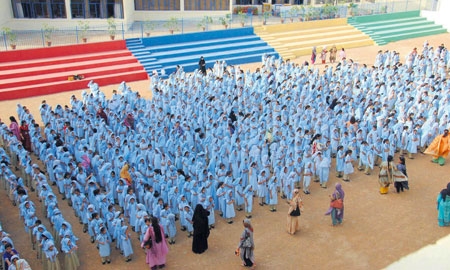 THE DAWOOD FOUNDATION FUNDS EDUCATION INITIATIVES, SUCH AS THE DAWOOD PUBLIC SCHOOL
SHARE

Hussain Dawood, Chairman of Dawood Hercules Corporation, has invested in every sector where Pakistan needs him – energy infrastructure, food production and education.

Dawood Hercules Corporation Limited (DH Corp) is an investment holding company with associated business interests ranging from information technology and financial services to food, fertiliser, chemicals manufacturing and storage, and energy. Yet, through it all, the corporation maintains one primary focus: investment opportunities.

“The nation is screaming out for energy. It just so happens that we probably have the most profound energy footprint in the energy spectrum. All we need is the financing.”

A good amount of that financing is already showing results. Last July, Pakistan’s Prime Minister Nawaz Sharif singled out Mr Dawood for appreciation, saying he is number one in setting up power projects in Pakistan, according to the Pakistan Observer.

“I am a business person and I am swayed by results more than stories. If I relied on stories, I would not be around for very long. The results are there,” says Mr Dawood. “We are the largest producers of power in the country, and we are also the largest consumers of energy.  We also have the most diversified energy footprint.”

The DH Corporation manages investments including its fully-owned subsidiary DH Fertilizers, a 48 per cent ownership of its associated Engro Corporation (one of Pakistan’s largest conglomerates), a 14 per cent stake in Sui Northern Gas Pipelines and a recent acquisition of a 17 per cent stake in the Hub Power Company (Hubco), Pakistan’s largest private sector power producer and the country’s first thermal independent power producer.

“Dawood Hercules Corporation is the group ‘mothership’ so to speak with controlling investments in other large corporations like Engro and Hubco. Both of these companies have a strong growth dynamic within the sectors in which they operate; however, it is critical to pick the right growth path,” says Mr Dawood. “We will be looking to provide more balanced direction through a strengthened and more thorough risk analysis of future opportunities.”

Given the extreme shortage of power in the country, Hubco has, and will continue to be, an important player in the growth and rebalancing of fuel sources in the power sector, while food and agrobusiness, he says, “should figure prominently within Engro’s portfolio going forward.”

Giving back is also part of the business model. Amid having all the opportunities in the world to live comfortably anywhere in the world, Mr Hussain has always believed and worked for Pakistan.

His belief in Pakistan’s potential remains undeterred and his track record is long. Community and social welfare activities have always been a priority of the Dawood Hercules Group and it generously participates in a multitude of philanthropic activities.
Mr Dawood is Chairman of the Pakistan Poverty Alleviation Fund – the World Bank's largest microfinance initiative – and The Dawood Foundation, formed by his family in 1961, which is one of the largest public charitable trusts in the country today. The foundation has contributed substantial funds for establishing schools, colleges, hospitals and dispensaries, including the Dawood College for Engineering and Technology (DCET), established by the foundation in 1962. It was nationalised in 1971 but continues to function to-date.

In 2012, the Karachi School of Business and Leadership (KSBL) was created with the involvement of Karachi’s business community and with the strategic collaboration of the Cambridge Judge Business School. Dawood Public School (DPS) was established in 1983 and has been growing since to provide quality education to girls. The foundation has committed to some 30,000 scholarships in education.

Apart from this, the Dawood Foundation has made noteworthy contributions in health related projects and in disaster recovery and rehabilitation works. The foundation’s prime area of focus remains on high quality leadership education, and grooming the next generation of business leaders.

All of this is part of a broader philosophy of both giving back to the community, and helping the community learn to master business management. “You have got to realise that welfare, health and education are important for people to live a reasonable life,” says Mr Dawood.

Meanwhile, Mr Dawood was the first Pakistani to become a member of the World Economic Forum in 1992. His entrepreneurial ventures are among the top performing business houses in Pakistan and have achieved marvellous success under his visionary leadership.

“We are in solar, bio, energy, coal and wind. So we are fortunate that we also have the manpower to do that, and this is another important factor – if you have the organisational capability to be able to take on these projects and implement them,” says Mr Dawood.

And he has that capability. The Dawood Hercules Corporation’s ongoing success with some of Pakistan’s top corporations – DHC, Engro and Hubco – speaks not only for Mr Dawood, but also for the promising future of Pakistan.