The landmark TAPI pipeline and Iran-Pakistan pipeline, which, after a long delay, now looks set to go ahead thanks to the removal of sanctions on Iran, will help Pakistan’s gas utility companies, Sui Northern Gas Pipelines Limited and Southern Gas Company, cope with rising demand for natural gas 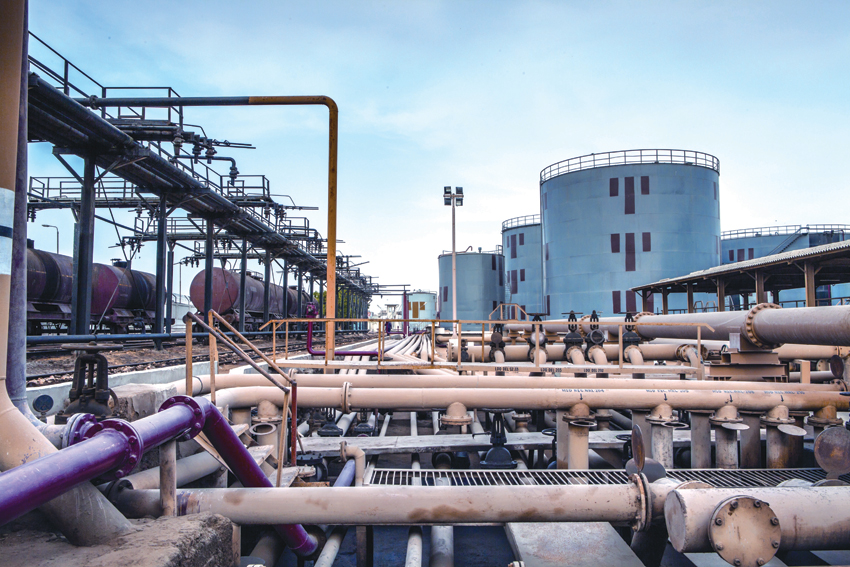 Pakistan’s oil and gas industry has faced considerable challenges over recent years but domestic demand for energy and untapped resources means it’s fast becoming a tempting market for investors. Energy shortages in Pakistan are commonplace and the resultant negative effect on domestic output means solutions are keenly sought by the government, one of which is the importation of gas.

Pakistan currently has a deficit of 2 billion cubic feet (bcf) of gas per day, rising to 2.5 bcf per day during the winter months. Unfortunately Pakistan cannot meet the demand for gas through domestic production; therefore importation of natural gas is a necessity.

“We have a major deficit and so far there is a heavy reliance in imported crude oil. The idea of gas is to be able to meet the shortfall that we have,” says Khalid Rahman, Managing Director of Sui Southern Gas Company, one of the country’s leading gas utilities. “LNG (liquefied natural gas) will be a game breaker because any shortfall that you have can be solved by bringing it by vessel. LNG has to and will play a very important role in going forward.”

Aside from the importation of LNG by vessel, there are a number of pipeline projects set to come on stream that will significantly boost Pakistan’s supply of imported natural gas.

One of the most notable projects is TAPI, a 1,800 kilometer-long pipeline that will pass through Turkmenistan, Afghanistan, Pakistan and India, through which to up to 33 billion cubic meters (bcm) of natural gas will be pumped per year. The pipeline will transport Caspian Sea natural gas from Turkmenistan through Afghanistan into Pakistan and then to India (200 kilometers will run though Turkmenistan, 773 kilometers – Afghanistan, 827 kilometers – Pakistan). Proponents of the project say it will form a vital part of the establishment of the modern Silk Road, which was once an ancient network of trade routes through the Asian continent connecting the West and East.

The project will cost around $10 billion and is being developed and partly funded by the Asian Development Bank. It was recently reported that the bank will not limit itself to funding, but will render assistance in attracting the credit sides, as well as take part in the coordination of the work to attract other interested funders and investors.

TAPI, which is also being supported by the United States, was first conceived in the 1990s. It has long suffered from delays, but in September Turkmenistan government officials said that building work would finally begin in December.

Pakistan’s Prime Minister Nawaz Sharif told a meeting of business leaders in Islamabad that he would travel to Turkmenistan in December for the project’s inauguration ceremony, adding that it would take just four years to complete. The prime minister has hailed TAPI as a game changer that would help to spur greater regional integration.

Another game changer for Pakistan will be the Iran–Pakistan (IP) gas pipeline, also known as the Peace Pipeline, which will deliver natural gas from Iranian fields to Pakistan. Like TAPI, the 2,775 kilometer-long IP pipeline has long been delayed, but the changing geopolitical landscape that will lead to the removal of sanctions on Iran will pave the way for construction of the project to finally begin.

“We need gas. Iran has the world’s second-largest gas reserves,” Pakistan’s Minister of Petroleum Shahid Khaqan Abbasi has stated.  By 2020, the minister predicts that the IP pipeline will provide Pakistan with a peak of 750 million cubic feet of gas per day (mmcfd), equating to $2.5bn annually at current prices.

“Sanctions are still in place and investors are worried that even after removal of sanctions, still there is possibility of sanctions coming back because of different legal issues. But we are working on it (the Iran-Pakistan pipeline). There is no serious problem and we are going ahead with the pipeline from Gwader to Nawabshah”

Construction of 700 kilometers of the pipeline from Gwadar to Nawabshah, the main part of Pakistan side of the project will be managed by a reputed Chinese firm. The remaining 80 kilometers of the pipeline from Gwadar to the Iranian border will be built by two Pakistani companies, Sui Northern Gas Pipelines Limited (SNGPL) and SSGC.  According to Mr. Abbasi, construction will begin within six months, with the project due for completion by December 2017.

“Sanctions are still in place and investors are worried that even after removal of sanctions, still there is possibility of sanctions coming back because of different legal issues,” Mr. Abbasi said in a recent interview. “But we are working on it. There is no serious problem and we are going ahead with the pipeline from Gwadar to Nawabshah.

“Based on the IP contract, the basic price (of gas) is agreed but it was also agreed that one year before the first gas flow, the two parties will sit together and negotiate the final price based upon the market realities.”

Once operational, the IP and TAPI pipelines will offer a significant boost to Pakistan’s gas utility companies struggling to keep up with rising demand. One such company is SNGPL, the country’s largest integrated gas company, which today serves more than 4.9 million consumers in North Central Pakistan, through an extensive network in Punjab, Khyber Pakhtoonkhwa, Azad Jammu and Kashmir.

Chief Executive and Managing Director Uzma Adil Khan admits that the company currently cannot keep up with demand in the region (which in winter months can exceed 3 bcf), particularly in Punjab province, where the utility company is forced to carry out a gas rationing plan. But the IP pipeline and TAPI could change all that.

“SNGPL is hopeful that long delayed IP pipeline will now become a reality since the landmark nuclear deal between Iran and global powers will help remove western sanctions. SNGPL is likely to get an additional 500 mmcfd from IP in the beginning, which will be ramped up to 700 mmcfd,” says Ms. Khan.

In addition, SNGPL is also looking forward to the allocation of 994 mmcfd, or 75 per cent of gas imported through the TAPI pipeline, most of which will be pumped into Punjab province to help it overcome the severe energy crisis.

SNGPL is also laying a 762 kilometer-long pipeline network at a cost of PKR 57 billion ($ 546 million). “This pipeline project will ensure the timely import of RLNG (re gasified liquefied natural gas) into our system from Karachi. This will definitely reduce our fuel bill since RLNG will be cheaper than diesel,” says Ms. Khan, who continues by sharing her optimism for the future – an optimism fueled by these pipeline projects coming on stream.

“I feel that the government and SNGPL will work in harmony and make a joint leap forward in respect to attaining the ultimate goal of delivery of uninterrupted supply to our gas consumers,” she says. “The IP project for 700 mmcfd of gas coupled with the 1.2 billion cubic feet per day of RLNG that SNGPL will receive are likely to materialize in the short term.  This will also be beefed up in the medium term by the import of gas through the TAPI project. The government will also be laying the North-South pipeline for meeting the energy requirement of the country.”

The North-South gas pipeline will spread over 1,100 km and is due for be completion by March 2017 at a cost of $2 billion. In April, Pakistan and Russia finalized a $2-billion energy deal for laying the LNG pipeline from Karachi to Lahore.

Russia’s Ministry of Energy and Pakistan’s Ministry of Petroleum and Natural Resources will supervise and coordinate the implementation of the North-South Gas Pipeline Project. Russia has also expressed interest in supporting the IP pipeline.

While SNGPL will receive 994 mmcfd of gas imported through the TAPI pipeline, the remaining 331 mmcfd, or 25%, will be allocated to SSGC. Like SNGPL, SSGC also has its own pipeline project in the works. Its 358-kilometre network of pipelines, with a diameter of 42 inches, will be completed at a cost of Rs44 billion.

“There are a lot of opportunities for transmission and distribution in Pakistan and coming into the market as a JV (joint venture) partner for companies such as SSGC or SNGPL. That will support our business going forward and bring the partner very attractive opportunities”

“We have already started to work on various programs and the first one is this pipeline, from Karachi to Sawan, where there is a connecting point to transmit gas to SNGPL system,” explains SSGC managing director, Mr. Rahman.

SSGC’s transmission system extends throughout Southern Pakistan, from Sui in Balochistan to Karachi in Sindh, covering over 1200 towns in the Sindh and Balochistan. And the company is very involved in the communities in which it operates through its corporate social responsibility (CSR) programs.

“If you really want your business to be sustainable you have to engage communities,” says Mr Rahman. “We are making a better life for them, not in a giveaway model, but really creating new opportunities with programs such as development of schools, orphanages, scholarships etc. We need to respect the underprivileged to the maximum and that´s where our CSR program comes in.”

In terms of helping companies like SSGC and SNGPL move forward, where can U.S. investors come in? “The biggest issue we have is technology and that’s something where international expertise, specifically from the U.S., can be of great help,” Mr. Rahman replies.

“We need to find new ways to make technology work in our favor and help us overcome our challenges. There are a lot of opportunities for transmission and distribution in Pakistan and coming into the market as a JV (joint venture) partner for companies such as SSGC or SNGPL. That will support our business going forward and bring the partner very attractive opportunities.”