Article - December 2, 2013
Ancient history, charismatic culture, beautiful landscapes and luxury resorts; Mexico has it all and everything in between. These five Mexican picks are the ones to look out for in 2014 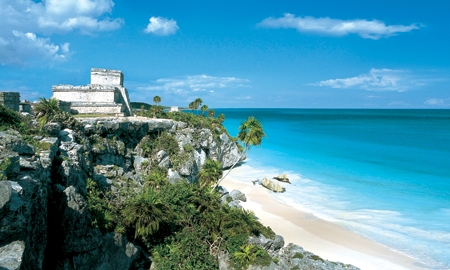 Without doubt, Mexico is one of the most popular and well-loved tourism destinations in the world, especially so amongst its American neighbors who continue to account for the large majority of its visitors every year.
However it’s not just the close and convenient proximity of the country to the States which make it such a big hit with vacationers. It’s probably fair to say that the year-round sunshine and the warm, temperate climate that is complimented by expansive stretches of coastline generously scattered with bountiful and beautiful beaches might have something to do with its vast appeal.
Add to that a unique blend of culture, characterized by a colorful fusion of Meso-American and European ethnicity, embodied by such major tourist draws as its Mayan ruins, colonial cities and indigenous tradition – and it is easy to understand why Mexico is not only a hugely sought after destination for U.S. citizens, but also with a growing number of tourists from all around the globe.
Being blessed with such rich natural and cultural diversity certainly enables Mexico to surprise and wonder at every turn. From the cactus-scattered deserts in the north to the wild jungles in the south, and all the marvel and adventure in between, Mexico’s delights include  numerous active volcanoes, magical archeological monuments, life-teeming lagoons, and a vibrant collection of towns and cities.
In short, Mexico is a real dazzling mix of history, culture and beauty intertwined together, just waiting to be unraveled by the curious and adventurous tourist. With a cornucopia of things to see and do (and eat and drink, of course), the following selection of highlighted Mexican gems gives just a tantalizing introduction into what this hugely diverse and captivating country really has to offer.