In an international conjuncture where prices of raw materials are near record lows, Mexico faces the future with more optimism and better prospects than other countries in the region, due to energy reform that has opened the sector to national and international investment. So far numbers are impressive: 30 contracts have been awarded in the hydrocarbon exploration and extraction sector, which represents a long-term investment of $7 billion 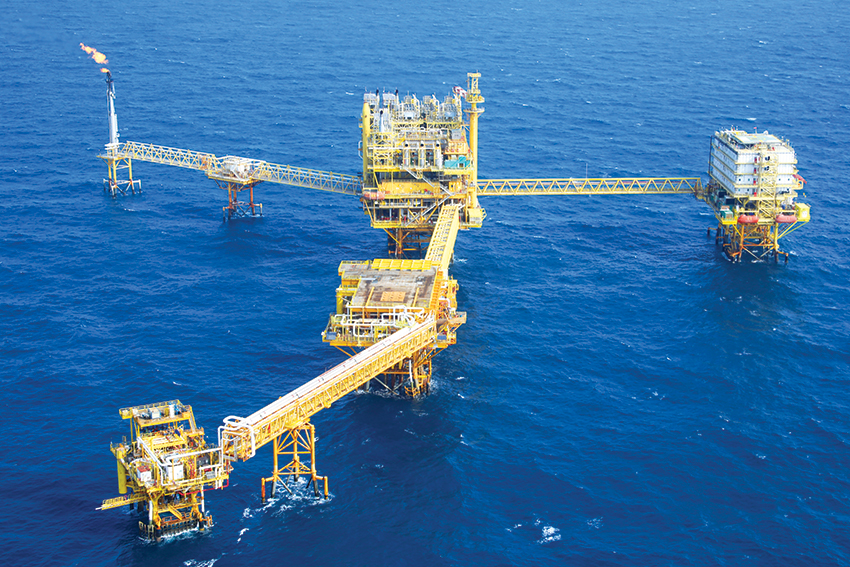 PLATFORMS IN THE KU-MALOOB-ZAAP OIL FIELD, IN THE SONDA DE CAMPECHE ZONE, IS MEXICO’S MOST ACTIVE, MAKING UP 40% OF TOTAL PRODUCTION (SOURCE: PEMEX)
SHARE

In February at the 35th IHS CERAWeek, Houston’s premier annual international gathering of oil industry leaders, Mexican president Enrique Peña Nieto was presented with the Global Energy Lifetime Achievement Award, in recognition of his role in overseeing the unprecedented overhaul of Mexico’s energy sector, which he hailed as “the most important economic change in the country of the last 50 years.”

The energy reform – which forms part of a wider plan to introduce legislative and constitutional changes that have impacted everything from telecoms and finance to the education, judicial and tax systems – opens up the state-dominated industry to the private sector like never before. By giving investors a stake in the exploration, production, distribution and commercialization of energy resources, Mexico – the fourth-largest oil producer in the Americas after the United States, Canada, and Brazil – hopes to boost its oil and gas production, increase its use of natural gas and renewables, and deliver cheaper and more reliable power supply to homes and businesses across the entire nation.

“No country has more profoundly modernized every aspect of its energy sector – from oil and gas, to power and renewable energy, to the sale of refined products – in such a short time,” said Daniel Yergin, conference chair and vice chairman of IHS Inc. “Already these changes are bringing lower electricity prices to the Mexican people. They promise to capture the best technologies to restore Mexico’s position as a world leader in oil and gas. It took profound leadership to put Mexico on this course and to make this transformation real. For this we honor President Enrique Peña Nieto.”

“No country has more profoundly modernized every aspect of its energy sector – from oil and gas, to power and renewable energy, to the sale of refined products – in such a short time. Already these changes are bringing lower electricity prices to the Mexican people. They promise to capture the best technologies to restore Mexico’s position as a world leader in oil and gas”

These changes to the energy sector are expected to lead to renewed growth and investment in Latin America’s second largest economy and one of the troubled region’s best economic performers last year, with growth of 2.5%. Mexico’s Secretary of Energy Pedro Joaquín Coldwell last year estimated that the reforms will add up to 3% to GDP growth by 2025 and will attract more than $60 billion of investments over three years in oil block contracts and infrastructure such as pipelines, power stations and transmission cables. Meanwhile the Comisión de Energía del Senado (Senate Energy Commission)predicts that the reforms will spur the creation of half a million jobs over the next four years and 2.5 million in the next 10 years.

In a country where there is a national holiday each year to mark the events of March 18, 1938, when President Lázaro Cárdenas removed international oil companies and nationalized Mexico’s reserves and facilities, President Peña Nieto’s proposal to once again allow foreign firms to have their share of Mexico’s vast oil wealth was always going to be a hard sell to the Mexican people. But somehow he has managed it, bringing all sides of the table together to pass a bill that ends the 77-year monopoly of Petróleos Mexicanos (Pemex), the state-owned company set up by President Cardenas in June 1938. “These reforms are the fruit of the collective effort of an entire nation that is transforming itself,” said President Peña Nieto in his speech at the IHS conference.

Since the legislation was passed, several international and Mexican firms have competed in Round 1 of the auction to sell off oil blocks on and offshore. In the first three phases, 30 contracts were signed with both Mexican and foreign companies, including BP and Italy’s Eni. Phase four will be the most interesting as the first of the country’s assets in deep waters, the “crown jewels” believed to hold billions of barrels of crude, will be up for bidding this December. The extraction of these resources will mean billions of additional dollars in state coffers, money which will be used for investment in infrastructure, health services, education and other areas of the economy.

The mass overhaul of the industry also includes an overhaul of Pemex itself. In February new CEO José Antonio González Anaya was brought in to reshape the company and sort out its finances. On his appointment, Mr. González said he would “revise the spending program and strengthen the investment processes, making use of the new joint venture and investment schemes provided by the energy reform,” in a bid to transform the heavily debt-burdened, loss-making energy giant (the 8th largest in the world) into a profitable, efficient and well-oiled machine.

Pemex’s monopoly in the importation and selling of gas and diesel has also come to an end. This year saw the passing of legislation which allows private companies to import, transport and sell gas and diesel products, and to open gas stations, a move which is expected to lead to lower prices at the pumps for consumers.

Aside from oil, the government hopes to increase the supply of natural gas, once again by giving the private sector a stake. According to the U.S. Energy Information Administration (EIA), Mexico’s consumption of natural gas is expected to increase 64% between 2013 and 2027. To meet the increased demand the government wants to exploit the country’s 545 trillion cubic feet of estimated shale reserves, and has signed contracts with a number of Mexican, U.S. and Canadian firms to construct a network of pipelines that will transport gas from the U.S. to several Mexican states. The tender process for these pipeline projects was overseen by the Comisión Federal de Electricidad (The Federal Electricity Commission, CFE), which like Pemex is undergoing a massive restructuring program to make it more efficient.

The gas pumped from the U.S. will be used to replace oil in the generation of electricity, which the CFE says will lead to cheaper electricity for consumers. A cheaper and more reliable energy supply for the country’s manufacturers will indeed have a significant impact on output and the economy as a whole. Cheaper power will also make Mexico – already the best place to do business in Latin America according to the World Bank’s Doing Business Index, in which it ranks 38 out of 189 countries – an even more attractive destination for foreign investors.

Mexico also hopes to exploit other clean energy resources to meet its demand for electricity. In March more than $2.6 billion worth of contracts were signed for wind and solar projects in the first round of auctions in the electricity sector.  A second auction will take place later this year, as Mexico aims to add 20 GW of clean power to the national grid over the next 15 years. “The energy reform has a very important environmental component. Clear commitments have been set so that we can have 35% of energy supply coming from clean sources by 2024,”says Enrique Alba, CEO of Iberdrola México, which has $2 billion worth of energy generation projects under construction in the country.

“It is clear that the primary objective in Mexico is to have better living conditions for everyone. That is the fundamental objective of everything that is being done in the country”

Over the same 15-year period, 25,000 km of high-voltage power lines will be constructed with investments of more than $13.4 billion. The tender for construction of 1,230 km of these lines will be launched this year, the first of its kind in the transmission sector.

Of course the success of Mr. Peña Nieto’s energy reforms depend heavily on the institutions tasked with implementing them, particularly CFE and the Comisión Nacional de Hidrocarburos (National Hydrocarbons Commission, CNH) which have been praised for carrying out the bidding processes with openness and complete transparency, an important consideration for potential bidders. “Implementing these reforms requires solid institutions,” says Carlos Morales Gil, CEO of Petrobal, one of the domestic companies that has been awarded contracts in Round 1. “This is something that has always distinguished Mexico: having institutions that command respect, that exhibit respect, and that are respected by all of us who operate within the different environments in the country – and having those institutions implement the reform processes in a transparent way.”

But the ultimate beneficiaries of these reforms will not be energy companies primed to profit from these new contracts signed with the CFE and CNH, but the Mexican people. This new energy industry will generate jobs, generate new revenue for investment in roads, schools and hospitals, and provide Mexicans with cheaper and plentiful energy. “It is clear that the primary objective in Mexico is to have better living conditions for everyone,” says Mr. Morales. “That is the fundamental objective of everything that is being done in the country.”