In 2012, HH the Amir, Sheikh Sabah Al Ahmad Al Jaber Al Sabah, created the Ministry of State for Youth Affairs, which is charged with designing and implementing youth-oriented strategies to empower the majority stakeholders in Kuwait’s future. This approach has catalyzed action across sectors, including all stakeholders from the public and private sector to prioritize youth on every level. 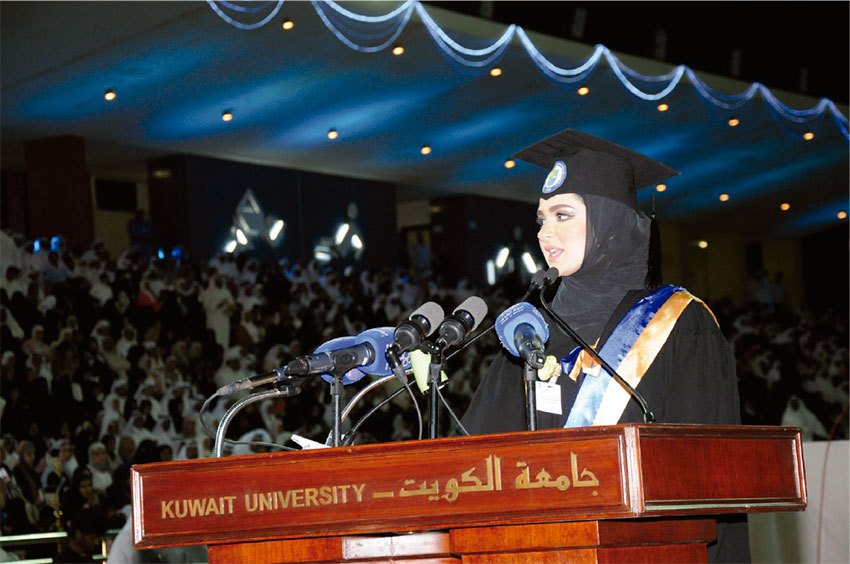 A FEMALE STUDENT ADDRESSES WELL-WISHERS DURING A GRADUATION CEREMONY
SHARE

Despite its ancient and rich history, Kuwait is in fact a young country. According to a recent census approximately 74% of its citizens are under the age of 34, and this statistic has not escaped the attention of decision-makers. As a result, over the last five years, the pressing need to provide a sustainable future for this growing youth demographic has increasingly been raised in national dialogues and consequently incorporated into Kuwait’s development strategy.

Perhaps most significantly, concrete wide-ranging policy measures aimed at supporting the majority under-30 cohort began with the commencement of the National Youth Project (NYP) in 2012. The NYP was initiated by no less a figure than Kuwait’s head of state, His Highness, Amir Sheikh Sabah Al Ahmad Al Jaber Al Sabah, who directed the government to undertake a number of country-wide measures to ensure that the state implemented a wellorganized, far-sighted strategy for its youth majority.

This initiative began by calling stakeholders to action from across the country. The National Youth Convention, known as ‘Kuwait Listens’, was implemented, which in effect became a national town hall to gauge youth sentiment on themes ranging across the socioeconomic sphere.

“What has really made us unique, effective and successful in our youth empowerment initiatives is that it is a completely unified whole of country approach. Everyone has been involved; government, private sector, NGOs, individuals, universities and anyone else you might think of,” explains Sheikh Salman Sabah Al-Salem Al-Homoud Al Sabah, Minister of Information and Minister of State
for Youth Affairs.

This outreach was followed by a public forum, the Youth Council of 2012, which was followed by the establishment of The Ministry of State for Youth Affairs. Raising the youth issue to cabinet level demonstrated to citizens that Kuwait’s top political leadership had prioritized the matter.

The importance of the youth to the country’s future is well-understood by its leadership for very good reason. As The Ministry of State for Youth Affairs’ Undersecretary, Sheikha Al-Zain Al-Sabah points out, “They are not just the new generation; they are the new Kuwait.”