Article - July 27, 2011
Juan Valdez is synonymous with a good ‘cup of Joe’. The company behind the growing international chain of Juan Valdez Cafes, Procafecol S.A., is less famous yet no less important 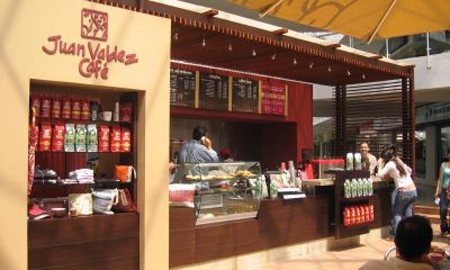 Over half a century ago, Juan Valdez and his trusty mule, Conchita, made a humble appearance on the world marketing stage, representing Colombian coffee as a friendly and accessible commodity.

Today, 51 years later, a new version of Mr. Valdez continues his journey throughout the world, reminding people of the pleasure they can get from each sip of the rich, velvety and life-infusing brew.

Procafecol was established in 2002 by the National Federation of Colombian Coffee Growers, coinciding with the inauguration of the first Juan Valdez Cafe in Bogota. From 2004 onwards, Procafecol began opening more shops in Colombia and in 2006, once it had created a holding company, it started distributing high quality Juan Valdez products through new distribution channels, including department stores.

The year 2005 marked Procafecol’s expansion into the international arena, when it opened Juan Valdez Cafes in the U.S. and Spain. Now, coffee lovers in Chile and Ecuador can also enjoy a freshly brewed cup of Colombian coffee, a coffee shake, a frozen coffee drink, and a tempting variety of bakery goods.The shops also sell packages of Juan Valdez “gourmet selection” sustainable coffee to prepare at home. When the fictitious Juan Valdez turned 50 last year, the company launched various initiatives to reinforce the brand around the world.
The legendary coffee grower got his very own website (www.juanvaldez.com) where visitors can learn more about the character and the coffee growers he represents. In line with his newer image, Juan Valdez has his very own Twitter and Facebook accounts.

In the first half of 2010, Juan Valdez took to the road and visited the U.S., where Procafecol’s 100% Colombian Coffee program has been a hit. New Yorkers, Chicagoans, Los Angelinos, Miamians and Seattleites were served 4,800 free cups of 100% Colombian coffee. Lest Juan’s compatriots be miffed, he also visited 18 cities and towns around Colombia on a “Juan Valdez 50 years: the road ahead” tour.

The 100% Colombian coffee advertising campaign, with the slogan “What’s behind the world’s best coffee?” reached 84 million people in the U.S. between 2009 and 2010, through the printed press (People magazine), television, and Internet (Facebook, Twitter and YouTube). Coffee drinkers were reassured that Juan Valdez represents quality, taste and sustainability.

Ahmed Salem
100% of 1
By far the worlds finest coffee, we need more in Oman.