Article - December 18, 2013
The natural addative grown in Sudan is a vital component of some of the world's favourite soft drinks, confectionary products and many other popular goods 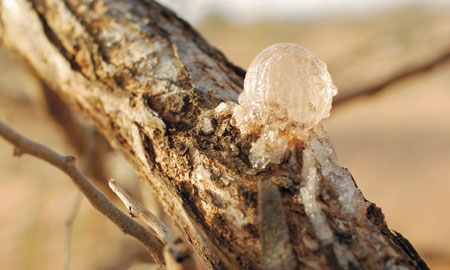 Most people have heard of gum arabic, yet perhaps not so many know where it comes from and what it is used for.   And even fewer completely understand its importance in the Sudanese economy. Sudan is to gum arabic what frankincense is to Oman or rare earth minerals are to China.
Gum arabic has several names, including acacia gum, meska and char goond, and is produced from the hardened sap from two specific species of the acacia tree that grow wild in the Sahel: the Vachellia seyal and the Senegalia Senegal. The former is commonly referred to as the hashab tree in Sudan.
Its best-known use is as a thickening agent and stabiliser – i.e. a natural, edible glue – in chewing gum and sweets, icing, fillings and soft drink syrups, where it binds the sugar to the drink. However, gum arabic is also an artist’s friend, serving as a binder in watercolour paints, photography (it binds pigments onto the paper), ceramic glazes, cosmetics and even pyrotechnic compositions. Other everyday uses for the gum include postage stamp, envelope and cigarette paper adhesives.
Between the 1950s and the late ‘90s, Sudan nearly had the monopoly on gum arabic, with its 520,000-square kilometre ‘gum belt’ producing some 80 per cent of the global supply. And although today this figure has dropped, Sudan still ranks as the world’s largest producer.
Hashab gum is considered the world’s highest quality gum arabic and so essential is it to Sudan’s economy (in the first half of 2013, exports stood at 33,000 tonnes worth £32 million) that it warrants its own state-run agency, the Gum Arabic Board (GAB). Moreover, so important is the product in the western world’s economy that when whenever the US has imposed sanctions on Sudan, gum arabic imports are exempt.

Due to the nature of the acacia tree – it grows both wild and cultivated – there are a good number of small-scale hashab gum producers. In 2009, the World Bank initiated the Revitalising the Sudan Gum Arabic Production and Marketing Project aimed at boosting income of these small-scale producers through enhanced production and marketing systems. Since 2010, the programme has benefitted more than 12,000 people, who have learned more efficient techniques and seen their average annual income grow by as much as 65 per cent.
Measures such as the World Bank’s project have helped bring about a kind of renaissance in the hashab industry; previously harvesting the gum wasn’t cost-effective enough for many and, as a consequence, acacia trees were cut down to use as cooking coal. Now, the highly coveted commodity is commanding higher prices, providing a decent livelihood for a growing number of people in some of Sudan’s poorest areas, and rounding out Sudan’s economy.
As it stands, gum arabic is sold as a raw material to other countries where it is then refined and resold. This gap opens up two possibilities. On one hand, entrepreneurs interested in establishing hashab gum refineries would be adding value to one of Sudan’s most important cash crops, while lower local costs would certainly attract buyers.
On the other hand, export markets are beginning to change patters, with more countries buying directly from Sudan rather from European traders.
According to Abdelmagid Abdelgadir, Secretary General of the Gum Arabic Board, China is buying increasingly more from Sudan and Malaysia is showing greater interest.
Whether or not Sudan builds its own refineries or sells directly to Far Eastern markets, gum arabic is here to stay. Alternatives such as starch have been explored, but none have such excellent properties as the original gum. Also, the world’s appetite for confectionary goods, fizzy drinks, art supplies, cosmetics and pharmaceuticals is nowhere near waning. The substance that binds so well will also help hold the Sudanese economy together for many years to come.